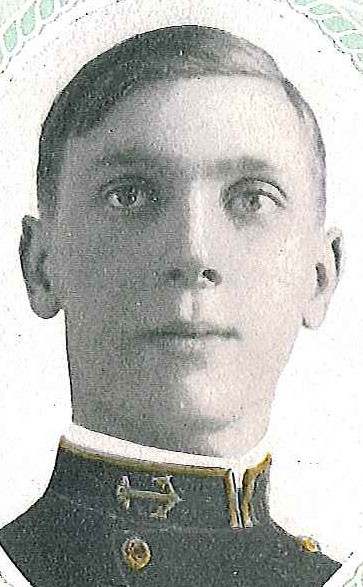 George Bamford Ashe was born in Raleigh, North Carolina, on January 19, 1891, son of S.A. and Hannah Willard Ashe. He attended Episocal High School in Alexandria, Virginia prior to entering the US Naval Academy, Annapolis, Maryland, on July 9, 1907, on appointment from North Carolina. Graduated on June 2, 1911, he served at sea during the period then required by law, and was commissioned Ensign in the US Navy on March 7, 1912. By subsequent promotion, he attained the rank of Captain, to date from September 23, 1939, and on January 1, 1947, was transferred to the Retired List of the Navy and advanced to the rank of Rear Admiral, on the basis on combat citation.

Upon graduation from the Naval Academy in June 1911, he was assigned to USS Louisiana, and served on board as a Passed Midshipman and later Ensign until October 1914. He had brief duty in USS Sacramento in Mexican waters, and in December of the dame year reported to USS South Carolina. In July 1916 he was transferred to USS Burrows, and served in that destroyer, operating in the Atlantic during most of the World War I period, being detached in August 1918.

He assisted in fitting out USS Palmer and was Executive Officer of that destroyer from her commissioning in November 1918 until May 1919, then fitted out and commanded the destroyer McCalla (DD-253) from her commissioning on May 19, 1919, until September of that year. He next had a three year tour of duty at the Naval Academy, after which he served on the Staff of Commander Destroyer Force, Atlantic Fleet, during the period August 1921 until September 1922. From October of that year until June 1924 he had successive service as Commanding Officer of USS Reuben James (three months), and on board USS North Dakota (ten months) and USS Richmond (seven months).

He again returned to the Naval Academy in August 1924, and this time was an instructor in the Department of Marine Engineering and Naval Construction. Detached in June 1926, he commanded USS William B. Preston in the Far East from August of that year until February 1929, and following brief duty in the Receiving Ship, New York, N.Y., reported in June 1929 to the Georgia School of Technology, Atlanta, Georgia. There he had duty until May 1932 with the Reserve Officers Training Corps Unit.

During the period June 1932 until June 1934 he served successively on board the cruiser Chicago and the battleship Texas, and for a year thereafter was a student at the Naval War College, Newport, Rhode Island. In June 1935 he reported to the Navy Department, Washington, DC, for a tour of duty in the Office of the Chief of Naval Operations. Detached in August 1937, he served until July 1939 on the Staff of Commander Destroyer Division SIX, Battle Force, and the next fifteen months he was attached to the Navy Yard, Charleston, South Carolina.

“For exceptionally meritorious conduct in the performance of outstanding services to the Government of the United States as Commander of a Transport Division during operations against enemy Japanese forces in the Solomon Islands Area from August 7, 1942, to July 15, 1943. Participating in the initial occupation of Guadalcanal-Tulagi on August 7, 1942, Captain Ashe subsequently commanded task units re-entering the enemy-infested waters adjacent to the islands carrying reinforcements and supplies for the American garrison on Guadalcanal. Despite frequent Japanese attacks by aircraft, submarine and shore batteries, he directed the units under his command with such superb tactical skill and courageous determination that each mission was completed without loss or damage to any ship in his division. His gallant leadership and unswerving devotion to duty were an inspiration to his command and contributed in large measure to the success of our forces in that vital area.”

He served as Chief of Staff and Aide to the Commandant, Sixth Naval District, Charleston, South Carolina, from February 1944 until November 1946, and had duty as Administrative Officer until released from all active duty, pending his retirement on January 1, 1947.