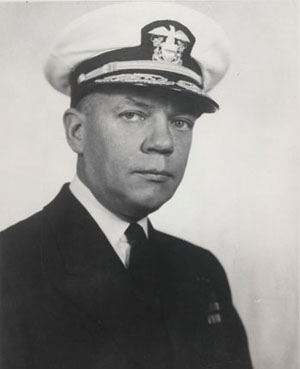 Admiral Low was born in Albany, New York, on 15 August 1894, son of the late Commander William Franklin Low, USN, and Mrs. Anna (Stuart) Low. He attended High School in Newton, Massachusetts and US Naval Academy, graduating from the later with the Class of 1915. In 1926 he completed the junior course at the Naval War College, Newport, Rhode Island.

His first assignments after graduation were in the battleship Connecticut and cruiser Montana. In the early part of his illustrious career, he was designated a submariner, and commanded the submarines D-3, O-9, L-1, L-2, S-12 and served on the staffs of Commander Submarine Division FIVE and Commander Control Force during and subsequent to World War One. This continuous sea duty from 1915 to 1925 was briefly interrupted for a six months' assignment with the Tactical Group Submarine Chasers, New London, Connecticut.

In 1926 he was an instructor in the Department of Seamanship at the Naval Academy, and following three years' service in the battleship New Mexico, became Officer in Charge of the Recruiters' Training School, Naval Station, Hampton Roads, Virginia. He later had staff duty with Submarine Squadron FIVE, and from 1932 to 1935 commanded the destroyer Paul Jones, on the Asiatic Station.

Returning to the United States, he had two tours of duty in the Navy Department, first in the Bureau of Navigation and later in the Office of the Chief of Naval Operations. These were interspersed with service afloat as Commander Submarine Squadron THIRTEEN between 1937 and 1939.

During the Neutrality Patrol period in the Atlantic for the year prior to our entrance into World War II, Admiral Low, as a Commander and Captain was Operations Officer on the staff of Admiral King, Commander-in-Chief, US Atlantic Fleet. When Admiral King came to Washington as Commander in Chief, US Fleet, and Chief of Naval Operations, Admiral Low continued as operations officer until September 1942, at which time he went to sea in command of the cruiser Wichita. During this cruise, which lasted until February 1943, the Wichita took part in the North Africa landings and operations off Rennell Island in the Pacific.

He was then brought back to Washington, promoted to Rear Admiral, and served in the important assignment of Chief of Staff, TENTH Fleet, the organization which guided the Atlantic anti-submarine effort. In January 1945 he took command of Cruiser Division SIXTEEN, and under his outstanding leadership that division supported the Okinawa invasion and participated in strikes against Kyushu, Southern Honshu and the Nansei Shoto Islands.

Following the capitulation of the Japanese in August 1945, he was in charge of the surrender and neutralization of all Japanese Naval installations in Korea and reported in November as Commander Destroyers Pacific Fleet, serving until March 1947, when, upon his advancement to Vice Admiral, he was given command of the Service Force, US Pacific Fleet. In November 1949 he returned to the Navy Department to conduct a special survey of the Navy's anti-submarine program, and in February 1950 was designated Deputy Chief of Naval Operations (Logistics). He continued duty in that capacity until May 1953, when he became Commander, Western Sea Frontier, and Commander Pacific Reserve Fleet. He served as such until relieved of all active duty pending his retirement, effective 1 July 1956. He was advanced to Admiral on the basis of combat awards.