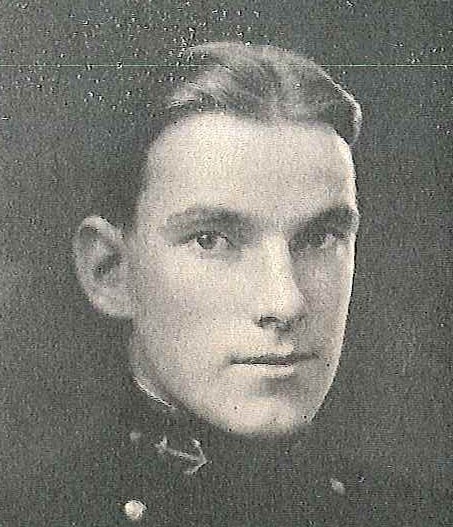 Francis Xavier Forest was born in Arlington, Massachusetts, on September 16, 1904, son of Mrs. Rose Quinn Forest and the late Joseph Mitchell Henry Forest. He attended public schools in Arlington, and entered the US Naval Academy, Annapolis, Maryland, from his native state on June 21, 1922. As a Midshipman he was a member of the Gymnastic Team, the class lacrosse and track teams, was on the “Log” staff and “Log” Board, was Editor of “Reef Points” and Associate Editor of the “Lucky Bag”. Graduated with distinction, eleventh in the Class of 1926 (456 members), he was commissioned Ensign on June 4, 1926, and through subsequent promotions attained the rank of Captain, his date of rank August 1, 1943.

After graduation from the Naval Academy, he was assigned first to USS Oklahoma, and after a year’s sea duty as a junior officer in that battleship, reported to the Division of Fleet Training Naval Operations, Navy Department, Washington, DC. He served there for three months and on September 20, 1927 joined USS King, a unit of Destroyer Division 41, Scouting Fleet. In June of the next year he returned to Annapolis for instruction in Naval Construction at the Postgraduate School, and, continuing the course at various places including the Massachusetts Institute of Technology, Cambridge, Massachusetts, from which he received the degree of Master of Science in June 1931.

He served at the Puget Sound Navy Yard from November 1931 until December 1934, and for three years thereafter, was assigned to the Bureau of Construction and Repair, Navy Department, Washington, DC, where he had duty in the Design Division. From January 1938 to April 1939 he served on various staffs of the Battle Fleet, attached successively to USS West Virginia, USS Maryland, USS Saratoga, USS Lexington, USS Houston and the USS Chicago, with duty in connection with damage control.

During a two year period preceding World War II, he served consecutively as Assistant U. S. Naval Attaché to Paris, France, in 1939 and as Assistant US Naval Attaché to London, England, in 1940-1941. He returned to the United States in March 1941, and throughout the war period served at the Philadelphia Navy Yard, Pennsylvania, first as Hull Superintendent, later as Shop Superintendent, and Industrial Engineer. He was awarded the Legion of Merit for “exceptionally meritorious conduct in the performance of outstanding services to the Government of the United States while serving (in these assignments), at the Navy Yard in Philadelphia from April 2, 1941 to October 26, 1945.” The citation continues in part:

“. . . Captain Forest rendered distinctive service in the direction and coordination of hull work on approximately 650 ships and, working tirelessly and with superb skill, contributed materially to the success of the Navy Yard in completing the building, repairing, outfitting and conversion of sufficient naval vessels to meet the needs of our rapidly expanding Fleet despite the shortage of materials and trained personnel. . . .”

Detached from the Philadelphia Navy Yard in January 1946, he next had a tour of duty in the Bureau of Ships, Navy Department. While so attached, he had additional duty in 1946 in connection with Operation Crossroads, the atomic bomb tests at Bikini Atoll, and received a Letter of Commendation from the Secretary of the Navy for “. . . outstanding services as Officer in Charge of the Bureau of Ships Group on the Staff of the Director of Ship Material, Joint Task Force One, during Operation Crossroads from 27 January 1946 until October of that year. . .”

Completing his tour of duty in the Bureau of Ships as Hull Assistant, Ship Technical Division, he was ordered in October 1947 to duty as Executive Officer of the David W. Taylor Model Basin, Carderock, Maryland, and later served as Hydro-Mechanics Officer, before his detachment in February 1950. He was next assigned to the Naval Shipyard, Portsmouth, New Hampshire, as Planning Officer. He reported in May 1953 to Headquarters, Third Naval District New York, New York, for duty as Supervisor of Shipbuilding and Naval Inspector of Ordnance.

In addition to the Legion of Merit and the Commendation Ribbon, Captain Forest has the American Defense Service Medal; the American Campaign Medal; and the World War II Victory Medal.