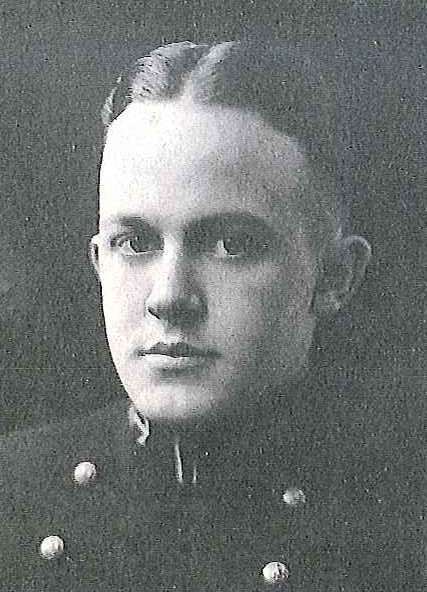 Howell Church Fish was born in Bath, New York, on May 29, 1901, son of the late Wilbur P. and Susan Church Fish. He attended St. John’s Military School, Manlius, New York (1913-1916), Worcester, Academy, Worcester, Massachusetts Institute of Technology, Cambridge, Massachusetts, before his appointment to the US Naval Academy, Annapolis, Maryland, which he entered from the Thirty-seventh District of New York on June 13, 1919. As a Midshipman he won the Navy “N” for swimming, was a member of the Olympic Team (Navy Swimming) in 1920; and served on the Staff of the Lucky Bag. Graduated and commissioned Ensign in the US Navy on June 4, 1924, he subsequently advanced to the rank of Captain, to date from March 10, 1945, transferred in that rank to the Retired List of the Navy on June 30, 1955.

After graduation from the Naval Academy in June 1924, he was assigned to the USS Tennessee, and served as a junior officer in the engineering department of that battleship for a year. From May 1925 to January 1926 he was on board the USS Kanawha, a fleet oiler, as Watch and Division Officer and Deck Officer. He reported in February 1926 to the Naval Air Station, Pensacola, Florida, and after brief training was detached in June of that year to the US Submarine School, New London, Connecticut, where he completed submarine instruction in December.

In March 1927 he joined the USS S-36, and served as Communications Officer, Engineer, and finally Executive Officer of that submarine, a unit of Submarine Division 17, based on Cavite, Philippine Islands. Detached in October 1929, he served from November of that year until December 1930 as Executive Officer and Navigator of the USS S-42. Operating with Submarine Division 19 on the Pacific Coast, based at San Diego, California. Shore duty followed as Ship Superintendent at the Navy Yard, Pearl Harbor, T.H., then from August 1932 until June 1933 he was Navigator and Communications Officer of the USS Beaver, submarine tender for Submarine Squadron 4, based on Pearl Harbor, T.H.

From July 1933 until August 1935 he had destroyer duty with the battle Force as Engineer of the USS Truxton, after which he had in the Planning Division of the Industrial Department, at Navy Yard, Mare Island, California. In June 1937 he joined the USS Fox, in which he served until September 1938, first as Executive Officer, later in command, while that vessel was a unit of Destroyers, Battle Force. In October 1938 he went aboard the USS Arkansas, as Assistant Fire Control Officer, remaining in that capacity until September 1940.

Returning to submarine duty, he served from October 1940 until January 1943 as Commanding Officer of the US Submarine Base, St. Thomas, Virgin Islands, which he had established and placed into commission prior to the outbreak of World War II in December 1941. When detached he was ordered to the USS Bushnell, and upon the commissioning of that submarine tender on April 10, 1943 became her Executive Officer. In September 1944 he moved up to Commanding Officer of that floating service station affectionately known throughout the Fleet as “Pond Lily.” For meritorious service as Executive Officer, and later as Commanding Officer, of the USS Bushnell during the period April 10, 1943, to August 25, 1945, he was awarded a Letter of Commendation, with Ribbon, from the Commander in Chief, US Pacific Fleet.

Captain Fish remained in command of the USS Bushnell throughout the latter months of the war and until January 1946, when he was assigned to the Nineteenth Fleet as Chief Inspector for the Mare Island Group. In March he was redesignated Group Commander, Mare Island Group Reserve Fleet, and remained on duty there until September 1948, with additional duty as Administrative Officer for Submarine, Mare Island, during the last four months. He next had a tour of duty as Administrative Officer at the Long Beach Naval Shipyard, Long Beach, California, after which, from May 1950 until May 1952 he served as Commanding officer of the Naval Station, Rodman, Canal Zone.

From June 1952 until April 1954 he was attached to the Naval Base, Boston Massachusetts, where he served as Assistant Chief of Staff for Naval Base Matters to the Commandant, First Naval District. In May 1954 he reported to Headquarters, Eleventh Naval District, San Diego, California, as a member of the General Court Martial, and continued duty in that capacity until relieved of all active duty pending his retirement on June 30, 1955.