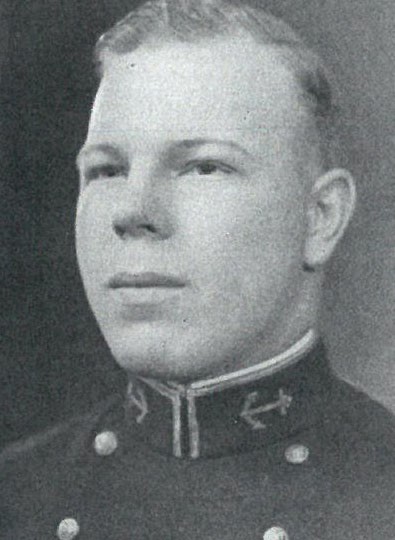 James Harry Campbell was born on May 28, 1911, in Hot Springs, Arkansas, son of Edward and Hazelle Kirk (Wadley) Campbell.  He attended Little Rock (Arkansas) High School, before, his appointment to the US Naval Academy, Annapolis, Maryland, from his native state in receiving his Block "N" in that sport in 1933.  Graduated and commissioned Ensign on June 1, 1933, he subsequently advanced in rank to that of Captain, to date from January 1, 1952.

Following graduation in 1933, he joined USS West Virginia and served in that battleship for two years.  Ordered in June 1935 to the Submarine Base, New London, Connecticut, he completed submarine training there in December of that year, and the next month reported on board USS S-11.  Detached from that submarine in June 1936, he then assisted in the fitting out of USS Plunger at the Navy Yard, Portsmouth, New Hampshire.

He was assigned to the Plunger upon her commissioning on Novemer 19, 1937, and in August 1940 transferred to USS S-23, to serve in that underseas craft until April 1941.  He was attached to the Navy Yard, Portsmouth, New Hampshire, when the United States entered World War II, December 8, 1941, and in February of the next year was assigned fitting out duty in USS Halibut at that Yard.  He joined her upon her commissioning on April 10, 1942, and remained on board until December of the same year.  He then assumed command of the USS Litchfield, and for "meritorious conduct...(in that capacity) from January to August 1943..."he received a Letter of Recommendation, with authorization to wear the Commandation Ribbon, from the Commander in Chief, US Pacific Fleet.  The citation further states:

"His exellent knowledge, exeptional torpedo recovery method and outstanding target service rendered in the training of submarine personnel was directly reponsible for the outstanding efficiency of these vessels..."

Transferred in August 1943 to USS Pogy, he served as Executive Officer of that submarine until November of that, and following a month's duty with Submarine Division FORTY-THREE, was ordered to the Electric Boat Company, Groton, Connecticut, where USS Blower was building.  The Blower was commissioned on August 10, 1944, and he assumed command.  Remaining in command until June 1945, he was next assigned to the Staff of Commander Submarine Squadron TWENTY-SIX until October 1945, when he reported for duty at the Submarine Base, New London,Connecticut.  He remained there until August 1948, when he became Commanding Officer of the USS Leary.

Detached from command of the Leary in April 1950, he reported the next month for duty at the Naval Ammunition Depot, Hingham, Massachusetts, where he served more than three years.

On October 12, 1953, he assumed command of the USS Dipthda (AKA-59), which under his command, was engaged in operations against, North Korean and Chinese Communists in Korea.  Detached from that attack cargo ship in December 1954, he next had duty as Officer in Charge (title later changed to Commanding Officer) of the Harbor Defense Unit, Naval Base, Norfolk, Virginia.  Designated in April 1958 Commanding Officer of the Naval Reerve Officers Training Corps Unit, University of South Carolina, at Columbia, he served there until ordered detached in September 1959 for an assignment in the Fifth Naval District, with headquarters in Norfolk, Virginia.  On July 1, 1960 he was transferred to the Retired List of the US Navy.