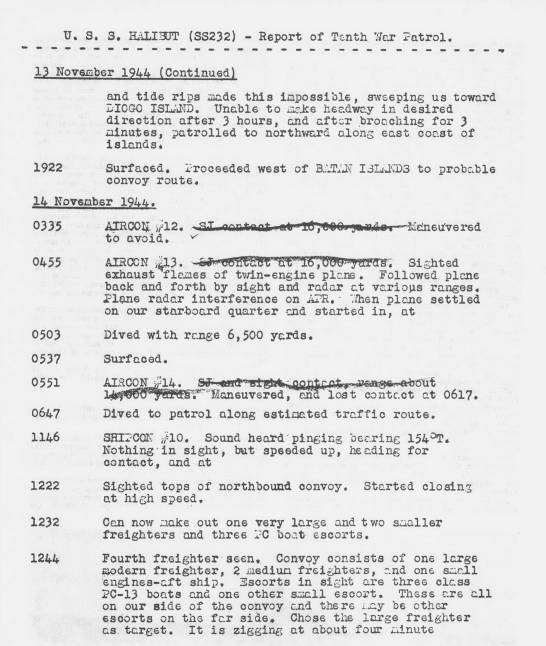 A large species of flatfish found on both sides of the Atlantic.

Halibut completed her outfitting and shakedown cruise 23 June 1942 and departed for the Pacific, arriving Pearl Harbor 27 June. Assigned to the Aleutian Islands area for her first war patrol, she departed 9 August from Hawaii. After searching Chichag of Harbor and the waters off Kiska Island, the submarine engaged in an indecisive gunnery duel with a freighter 23 August. Finding few targets, she terminated her patrol at Dutch Harbor 23 September.

Her second patrol was also off the Aleutians. She departed Dutch Harbor 2 October 1942 and surfaced for a torpedo attack on what appeared to be a large freighter 11 October. The ship, a decoy "Q-boat" equipped with concealed guns and torpedo tubes, attacked Halibut with high explosive shells and a torpedo as the submarine took radical evasive action to escape the trap. After eluding her assailant she returned to Dutch Harbor 23 October and Pearl Harbor 31 October 1942.

Halibut departed Pearl Harbor 22 November for her third war patrol, off the northeast coast of Japan. She began stalking a convoy the night of 9 December and early the next morning closed for the attack. A hit amidships sank Genzan Maru; swinging to starboard, Halibut put two torpedoes squarely into Shingo Maru, sinking her as well. Her success continued as Gyukozan Maru was sent to the bottom 12 December. Halibut made two more attacks on this patrol, each time being closely pursued by escort vessels, before returning to Pearl Harbor 15 January 1943.

The submarine sailed from Pearl Harbor again 8 February 1943 on her fourth war patrol. Heading for the Japan-Kwajalein shipping lanes she tracked a freighter the morning of 20 February and closed to sink her that night. While northeast of Truk 3 March she detected a large ship and attacked, but was driven off by the fire of deck guns. Halibut returned to Pearl Harbor from this patrol 30 March.

Halibut began her fifth war patrol 10 June and made her first attack 23 June. No hits were scored and the submarine was forced to wait out a severe depth charge attack. She damaged an escort carrier off Truk 10 July, and finally returned to Midway 28 July 1943. 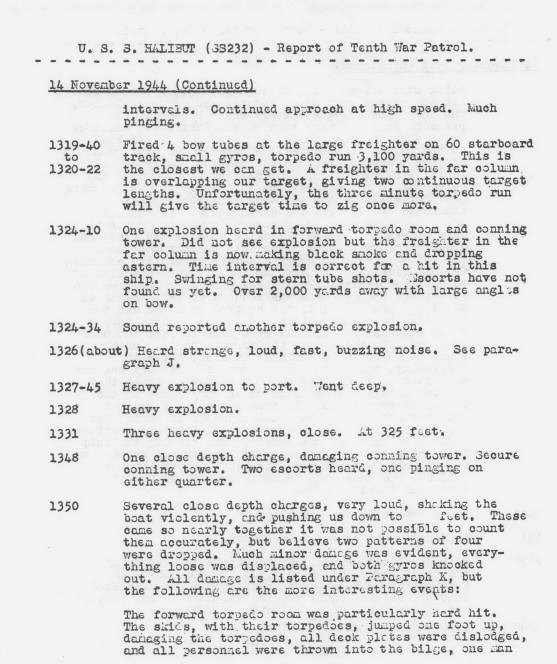 The coast of Japan was Halibut's cruising ground on her sixth war patrol. Departing Midway 20 August she sank Taibun Maru 30 August with three bow shots. Pressing home another attack 6 September, she was sighted but completed the approach to sink the freighter. Halibut completed this patrol 16 September, arriving at Pearl Harbor.

Halibut sailed from Pearl Harbor on her seventh war patrol 10 October. She made an unsuccessful attack on a convoy 31 October, was held down temporarily by escorts, and finally caught up with the same ships 2 November to sink Ehime Maru. She returned to Pearl Harbor 17 November.

On her eighth war patrol, beginning at Pearl Harbor 14 December, Halibut formed a coordinated attack group with Haddock and Tullibee. Cruising in the Marianas, the submarine scored no hits, returning to Midway 2 February 1944. 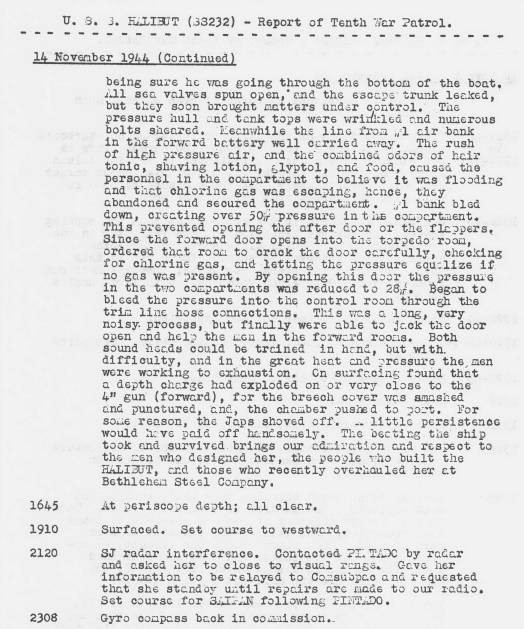 Halibut departed on her ninth war patrol 21 March. Cruising eastward of Okinawa 12 April she sank passenger-cargo ship Taichu Maru, and fired six torpedoes to separate a convoy 27 April. Closing in on a ship separated from the group, Halibut sank Genbu Maru, then shifted her attack to coastal minelayer Kanome, sinking her also. The submarine was then forced into evasive action as some ninety depth charges were dropped close aboard. Surfacing off the northeastern shore of Kume Shima 29 April she bombarded two warehouses and other buildings with her deck gun, and made an attack on a group of sampans with gunfire 3 May. With men critically wounded in the gun battle she returned to Pearl Harbor 15 May 1944. She then sailed for overhaul to San Francisco from which she returned to Hawaii 20 September 1944.

On her tenth war patrol Halibut again joined a coordinated attack group, this time with Haddock and Tuna. While proceeding to Luzon Strait, the submarines were ordered to set up scouting lines to intercept crippled units of the Japanese fleet retiring after the Battle of Cape Engano. Halibut encountered the remnants of Admiral Ozawa's force 25 October and attacked inflicting some damage. After pursuing other units until the following day, Halibut returned to station. The sub's next contact came 14 November when she attacked a convoy in Luzon Strait. She was immediately attacked in turn by planes apparently using magnetic airborne detectors. A short but effective depth charge attack directed by the aircraft left Halibut severely damaged but still under control. Her crew made temporary repairs and she steamed into Saipan 19 November. The gallant submarine received the Navy Unit Commendation for her performance on this patrol.

Halibut arrived San Francisco via Pearl Harbor 12 December 1944. Later she sailed 16 February 1945 for Portsmouth, N.H., where it was found that her damage was too extensive to justify repair. She decommissioned 18 July 1945 and was sold for scrap 10 January 1947 to Quaker Shipyard and Machinery Company of Camden, N.J.