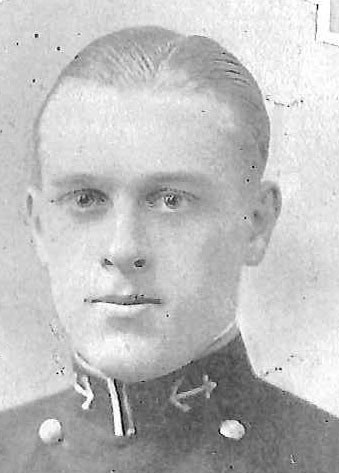 Gordon Leonard Caswell was born in Brockton, Massachusetts, on July 6, 1905, son Wallace B. and Edith G. (Baker) Caswell. He was graduated from Brockton High School in 1922 and New York Military Academy in 1923, and on July 11 of that year he entered the US Naval Academy, Annapolis, Maryland, as a Midshipman from Massachusetts. He was graduated and commissioned Ensign in the US Navy on June 2, 1927, and through subsequent promotions attained the rank of Captain, his date of rank March 20, 1945.

His first assignment as a Naval Officer was aboard the battleship USS Texas, then flagship of the US Fleet. He then served with the Asiatic Fleet in the destroyers USS J.D. Edwards and USS Borie, the river gunboat USS Tutullia on the Yangtze River Patrol, and the destroyer USS Truxtun. From 1932 to 1935 he had duty aboard USS Salt Lake City, heavy cruiser, and for two years thereafter he was a student at the Naval Postgraduate School, Annapolis, specializing in communications.

In 1938 he served as Communications Officer of USS Louisville, and was aboard when that cruiser made a four-month goodwill cruise to Australia, New Zealand and Tahiti. From 1938 to 1940 he served as Aide and Flag Lieutenant on the staff of Commander Cruiser Division 3, attached to the USs Concord, flagship, and later to the Commander of the Newly-formed Atlantic Squadron.

Early in World War II period, he reported to the Navy Department, Washington, DC, and after brief duty in the Office of the Chief of Naval Operations, assumed command of USS Morris in the Pacific, in which he participated in engagement including Gilbert and Marshall Islands, and New Guinea operations. He was transferred to command of USS Radford in September 1944, and participated in operations in the Philippines. He was awarded the Bronze Star Medal with Combat “V” The citation follows in part:

From January to December 1945 served as Communications Officer on the staff of Commander in Chief, Pacific Fleet, and received a Letter of Commendation with Ribbon for outstanding service in that capacity. He then returned to the United States for a tour of duty in the Officer of the Deputy Chief of Naval Operations (Fleet Operations Division). From January 1948 to August 1949 he was Assistant US Naval Attaché at Genva, Switzerland, and while there served as American Naval Representative at an International Conference on Communications.

He next commanded Destroyer squadron 12 in the Atlantic Fleet, and in February 1951 returned to the Office of the Chief of Naval Operations, to serve in the Naval Communications Division. On August 23, 1952 he assumed command of USS Baltimore, continuing as Commanding Officer until April 22, 1953. On May 1, 1953 he relieved the Chief of Staff and Aide to Commander First Fleet, and a week later reported aboard the flagship New Jersey as Chief of Staff and Aide to Commander Seventh Fleet, engaged in combat operations in Korea.

He was awarded the Legion of Merit with Combat “V,” for “exceptionally meritorious conduct” in the assignment from May 12 to July 27, 1953. The citation states: “Throughout this period, Captain Caswell discharged his many responsibilities with exceptional skill and initiative and was highly successful in coordinating and directing the formulation of fleet plans and policies…and rendered invaluable assistance and contributed immeasurably to the effective employment to the assigned forces, thereby insuring the infliction of maximum damage on the enemy…”

Early in 1954 he was ordered to return to the United States for duty in the Office of the Secretary of Defense, and in July 1954 was assigned to the Officer of the Chief of Naval Operations, as Communications Advisor. Since October 1, he has been Assistant Director of the Naval Communications Division.