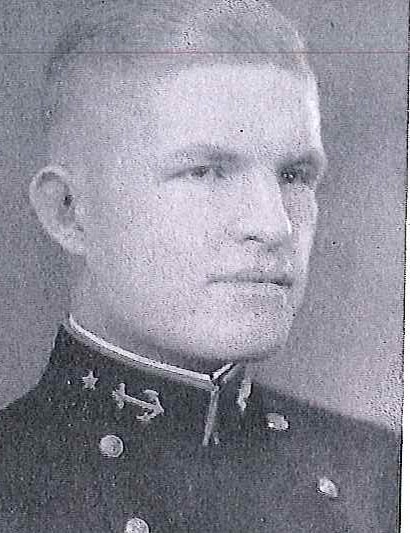 James Stephen Bethen was born on August 27, 1911, in Latta, South Carolina, son of James Stephen and Pearl Sellers (Norton) Bethea. He attended Prescott (Arizona) High School and the Werntz Preparatory School, Annapolis, Maryland, before his appointment to the US Naval Academy, Annapolis, by the Honorable Carl Hayden, Senator from Arizona, in 1929. As a Midshipman he was a member of the class wrestling and the rifle squads, was Commander of the Third Battalion his First Class years and starred in athletics all four years. Graduated and commissioned Ensign on June 1, 1933, he subsequently attained the rank of Captain to date from July 1, 1951.

Following graduation from the Naval Academy in 1933, he joined USS Northampton. Detached from that cruiser in May 1935, he reported for instruction in Naval Construction at the Massachusetts Institute of Technology, Cambridge, where he received the degree of Master of Science in June 1938. Completing temporary duty in the Bureau of Ships, Navy Department, Washington, DC, he was assigned in August 1938, to the Navy Yard, Boston, Massachusetts, as Assistant Hull Superintendent and Assistant Planning Officer.

In October 1941 he became Assistant Supervisor of Shipbuilding (Surface Ship Inspection Officer) at the William Cramp and Sons Shipbuilding Company, Philadelphia, Pennsylvania. He continued to serve as such throughout the most part of World War II. For “outstanding performance of duty…from October 18, 1941 to March 10, 1945…” he received a Letter of Commendation, with authorization to wear the Commendation Ribbon, from the Secretary of Navy. The citation continues in part:

“Supervising the construction and inspection of light cruisers and submarines and the conversion of merchant vessels, Commander Bethea performed his difficult duties with sound judgment, tact and diligence, cooperating with contractors to produce vessels of the finest possible quality…”

Between April and November 1945 he served as Assistant Industrial Manager at the Naval Repair Base, Okinawa, reporting in February 1946, as Director of Ship Material on the staff of Commander Joint Task Force ONE. This task force was formed by direction of the Joint Chiefs of Staff and with the approval of the President to conduct the atomic bomb tests against Naval vessels in order to gain information of value to the national defense.

From August to December 1946 he attended the Advance Management Program, Harvard University, Cambridge, Massachusetts. Upon completing the course he became Assistant Design Superintendent (Hull and Ordnance) at the Naval Shipyard, Portsmouth, New Hampshire. He remained there until May 1949, when he was assigned to the Bureau of Ships, Navy Department, Washington, DC, where he now serves in the Ship Technical Division.