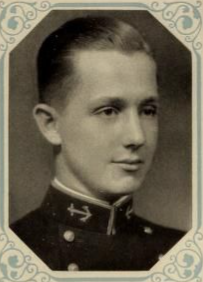 John Alden Webster was born in Townline (Erie County), New York, on April 29, 1909, son of John L. and Marie E. (Zeller) Webster. He attended Carnegie Institute of Technology, Pittsburgh, Pennsylvania, for a year (1926- 27) before his appointment to the US Naval Academy, Annapolis, Maryland, which he entered as a midshipman on June 14, 1927. Graduated with the degree of Bachelor of Science and commissioned Ensign in the US Navy on June 4, 1931, he subsequently advanced to the rank of Captain, to date from March 3, 1950.

After graduation from the Naval Academy in June 1931, he was assigned to the Naval Air Station, Norfolk, Virginia, for preliminary flight instruc­tion, and in August of that year was transferred to USS Salt Lake City (CA-25). He served as a junior Watch and Division Officer on board that cruiser until June 1932, then had successive duty in destroyers, first us Assistant Gunnery-Officer and Navigator of USS J. Fred Talbott (DD-156), and from November 1932 until April 1934 as Torpedo Officer, Engineer and Nav­igator of USS Dahlgren (DD-189).

He assisted in fitting out USS Tuscaloosa (CA-37) at the New York Shipbuilding Company's plant, and served as a Watch and Division Officer on board that heavy cruiser from her commissioning, August 17, 1934, until de­tached in May 1937. He had similar duty in USS Melville (AD-2) during the next year, when that vessel operated as tender for Destroyer Flotilla 2, Battle Force. Detached from the MELVILLE in May 1938, he returned to the Naval Academy in July of that year, and served until October 1939 as an In­structor of Navigation.

From December 1939 to September 1940 he was again at sea as Executive Officer and Navigator of USS Herndon (DD-198), recommissioned for duty with the Caribbean Neutrality Patrol. The HERNDON was among the first destroyers to be turned over to the British at Halifax, Nova Scotia, on Septem­ber 10, 1940, under Lend-Lease agreement. In October of that year he assumed command of USS Bullfinch (AM-66), an experimental minesweeper converted from a trawler, which, under his command until December 1941, did numerous sweeping jobs in US East Coastal waters.

After the outbreak of World War II, he commissioned USS Forrest (DD-461) in January 1942 and served as her Executive Officer until October 1942 when he was ordered to the Staff of Commander Destroyer Squadron 15, as Gunnery and Operations Officer. As such he participated in the North African and Sicilian Invasions, and was awarded a Letter of Commendation, with Rib­ bon and Combat “V” the Commander in Chief, US Atlantic Fleet, “For meritorious conduct in the performance of his duties (in that capacity) dur­ing the period 10 October 1942 to 13 December 1943…”

Commissioning USS Bearss (DD-654) at Mobile, Alabama, in April 1944, he commanded that destroyer until April 1945, most of which time she was in action in the North Pacific Combat Area including the Aleutian and Kurile Islands. He was awarded the Bronze Star Medal, with Combat “V” cited as follows:

"For meritorious service as Commanding Officer of the USS BEARSS in action against enemy Japanese forces in the Pacific War Area from August 9, 1944, to April 13, 1945. A skilled and resolute leader, Commander Webster skillfully directed the fire of his ship against hostile installations during this period and, by his courage and determination, contributed to the suc­cess of four bombardments against the enemy in the Kuriles…”

In May 1945, following his return to the United States, he reported to the Navy Department, Washington, DC, for a tour of duty as Detail Officer for Commanders in the Bureau of Naval Personnel. Detached in August 1948, he assisted in fitting out USS Newport News (CA-148) at the Newport News (Virginia) Shipbuilding and Dry Dock Company, and served as Executive Officer of that heavy cruiser from her commissioning in January 1949 until September 1950, during which she was assigned to occupation service in the European Area from January 16 to May 18, 1950.

Promoted to Captain while on board the NEWPORT NEWS in July 1950, he returned to the Navy Department in October of that year, to serve until June 1951 as Liaison Officer, Operational Development Force, in the Office of the Chief of Naval Operations. He was next ordered to the Office of the Secre­tary of Defense, Washington, DC, as Defense Assistant to the National Se­curity Council Staff, and was assigned, until July 1953 to the Office of Assistant Secretary of Defense Frank C. Nash. In August 1953 he assumed com­mand of USS Pocono (AGC-16), Flagship of the Commander Amphibious Force, US Atlantic Fleet.

He was a student at the National War College from September 1954 to June 1955, after which he was assigned to the Joint Staff of the Commander in Chief, Far East, in Tokyo, as Deputy Assistant Chief of Staff for Civil Affairs. In January 1957 he assumed command of USS Rochester (CA-124) and after a year in that command, assumed the duties of Chief of Staff to Commander Cruiser-Destroyer Force, US Pacific Fleet, in February 1958. On August 13, 1959, he was ordered detached and to duty in the Office of the Chief of Naval Operations, Navy Department.