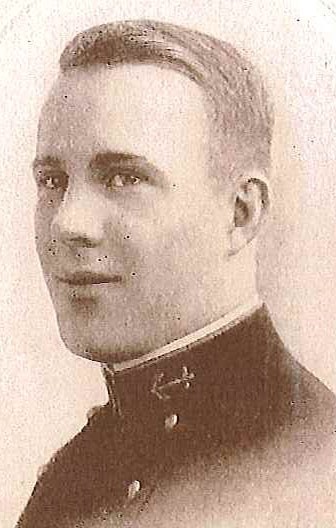 John Hazard Carson was born in Spartanburg, South Carolina, on April 13, 1896, son of the late Ralph and Katherine Johnson Carson. He attended Spartanburg High School before his appointment to the US Naval Academy, Annapolis, Maryland, from the Fourth District of South Carolina in 1912. As s Midshipman he was a member of the basketball and lacrosse varsity teams. Graduated and commissioned Ensign on June 2, 1916, he received temporary promotions during World War I to Lieutenant, both grades, and was commissioned in those grades in 1919 and 1920 respectively. He was subsequently promoted during the years, attaining the rank of Rear Admiral on December 4, 1946, to date from March 4, 1944.

Upon graduation in June 1916, he joined USS Kansas, transferring in October to USS Connecticut which operated with the Atlantic Fleet during the period of World War I. while attached to the latter, he landed with the battalion of Marines at Santa Cruz, Cuba, to protect the property and citizen of that city. Detached from the Connecticut in December 1918, he reported for duty in connection with fitting out USS Idaho at the New York Shipbuilding Company, Camden, New Jersey. He served in that battleship from her commissioning, March 24, 1919, until November 1920, when he was transferred to USS Ludlow, fast minelayer, as Executive Officer. A year later he returned to Annapolis for postgraduate instruction in Ordinance at the Postgraduate School, continuing this course at various naval installations and at the Massachusetts Institute of Technology, Cambridge, Massachusetts, from which he received the degree of Master of Science in Mechanical Engineering.

On July 1, 1924 he joined USS Savannah, submarine tender, and served as her Torpedo Repair Officer until November 1926, when he was transferred to USS Paul Hamilton as Executive Officer. Returning to the United States in June 1927, he served for two years in the Torpedo Section of the Bureau of Ordnance, Navy Department, Washington, DC. In June 1929 he became Aide and Squadrons Gunnery Officer of the staff of Commander, Destroyer Squadrons, Scouting Fleet.

In June 1931 he had duty as the Boston Navy Yard in connection with the restoration of the Constitution, “Old Ironsides,” which had made her first cruise in 1798 and was in process of restoration by means of funds provided by school children of the United States and other private contributions. He served as Executive Officer of the Constitution from her commissioning, July 1, 1931, until April 30, 1932. During that period the historically famous vessels visited many ports on the Atlantic and Gulf Coasts.

After a tour of duty as Experimental Officer at the Naval Proving Ground, Dahlgren, Virginia, from May 1932 until August 1934, he joined USS New York to serve as Gunnery Officer for one year, and as Navigator for a year. In June 1936 he assumed command of USS Dewey, and after a year was detached to return to the Naval Proving Ground where he remained for three years as Proof Officer. On July 12, 1940 he joined the USS New Mexico as Executive Officer and served in that capacity for six months while she operated in the Pacific.

On January 31, 1941 he reported for duty as Operations Officer on the staff of Commander Cruisers, Battle Force, and was aboard USS Honolulu during the attack on Pearl Harbor on December 7, 1941. He continued staff duty as Operations Officer from February 1942 on the staff of Commander, Anzac Force, and Commander Allied Naval Forces, Southwest Pacific. He was awarded a Gold Star in lieu of the Second Bronze Medal with Combat “V,” and cited as follows:

Reporting in April 1943 to the Bethlehem Steel Company, Shipbuilding Division, Quincy, Massachusetts, he had duty in connection with fitting out USS Boston. He assumed command of that cruiser when she was placed in commission on July 30, 1943, and after her shakedown cruise took her to join Task Force 58 in the Pacific in January 1944, commanding her through numerous operations against the enemy Japanese forces, until June 5, 1944.

He was awarded the Bronze Star Medak with Combat “V,” for “meritorious service as Commanding Officer of the USS Boston during operations against Japanese forces from January to June 1944…” The citation continuous: “(He) contributed much to the successful operations of his ship in conducting raids on Palau, the Western Caroline’s, Marcus Island, and Wake Island. While acting with the Fast Carrier Task Forces, he aided in furnishing cover for the Marshall Islands Campaign, the occupation of Hollandia and North Western New Guinea, and for the Marianas Campaign where the Boston participated in the First Battle of the Philippine Sea…”

From July 1944 until June 1946 he commanded the US Naval Torpedo Station, Newport, Rhode Island. During that period the Bureau of Ordnance awarded the torpedo station the “Naval Ordnance Development Award” in recognition of the distinguished service of its organization to the research and development of naval ordnance. For his services in command, he received a Letter of Commendation with authorization to wear the Commendation Ribbon from the Secretary of the Navy stating in part:  “…(His) administration of this station laid a solid groundwork for its successful conversion from the peak of its wartime activity through the gradual decreasing schedule requirements to its postwar status.  His understanding of the problems involved and his sound judgment contributed materially to the effectiveness of the US Naval Torpedo Station, Newport, Rhode Island.”

On July 27, 1946, he assumed command of Transport Squadron ONE, Amphibious Forces, Pacific Fleet. During November and December 1946, units of this transport squadron, together with other units of the Amphibious Forces, Pacific Fleet, and the Secord US Army Infantry Division from Fort Lewis, Washington, engaged in the first full-scale peacetime Amphibious Training Exercises. These exercises were conducted off the coast of Southern California and were brought to a successful conclusion on December 14, 1946.

He reported in February 1947 to duty as Commander, cruiser Division 15, US Pacific Fleet, and a year later was ordered to duty in the office of the Secretary of the Navy, Navy Department, Washington, DC. In May 1948 he was assigned duty as Navy Secretary, Research and Development Board, Washington, DC. On November 23, 1949 he was ordered to duty afloat as Commander, Cruiser Division Two, Atlantic Fleet, and in August 1950 was transferred to duty as Commanding Training Command, Atlantic Fleet. In July 1952 he reported as Deputy Commander Western Sea Frontier and Deputy Commander Pacific Reserve Fleet, and in July of the next year, became Commander Mare Island-Vallejo Area, with headquarters at the Naval Base, San Francisco, California.

On June 2, 1954 he became Chief of the Military Assistance Advisory Group, Norway, with headquarters in Oslo, and on October 10, 1956 reported as Deputy Commander of the Eastern Sea Frontier with additional duty as Deputy Commander of the Atlantic Reserve Fleet. He continued to serve as such until relived of all active duty pending his retirement, effective May 1, 1958. Upon his retirement he was advanced to the rank of Vice Admiral on the basis of combat awards.

In addition to the Bronze Star Medal and Gold Star in lieu of a Second Bronze Star Medal both with Combat “V,” and the Commendation Ribbon, he has the Victory Medal, Atlantic Fleet Clasp; the American Defense Service Medal with Bronze “A”; Asiatic-Pacific Campaign Medal with four bronze stars; American Campaign Medal; World War II Victory Medal; Navy Occupation Service Medal, Europe and Asia Clasp; China Service Medal; National Defense Service Medal; and the Philippine Liberation Ribbon. He has also been awarded the decoration, Honorary Commander in the Military Division of the Most Excellent Order of the British Empire by the Government of Great Britain.