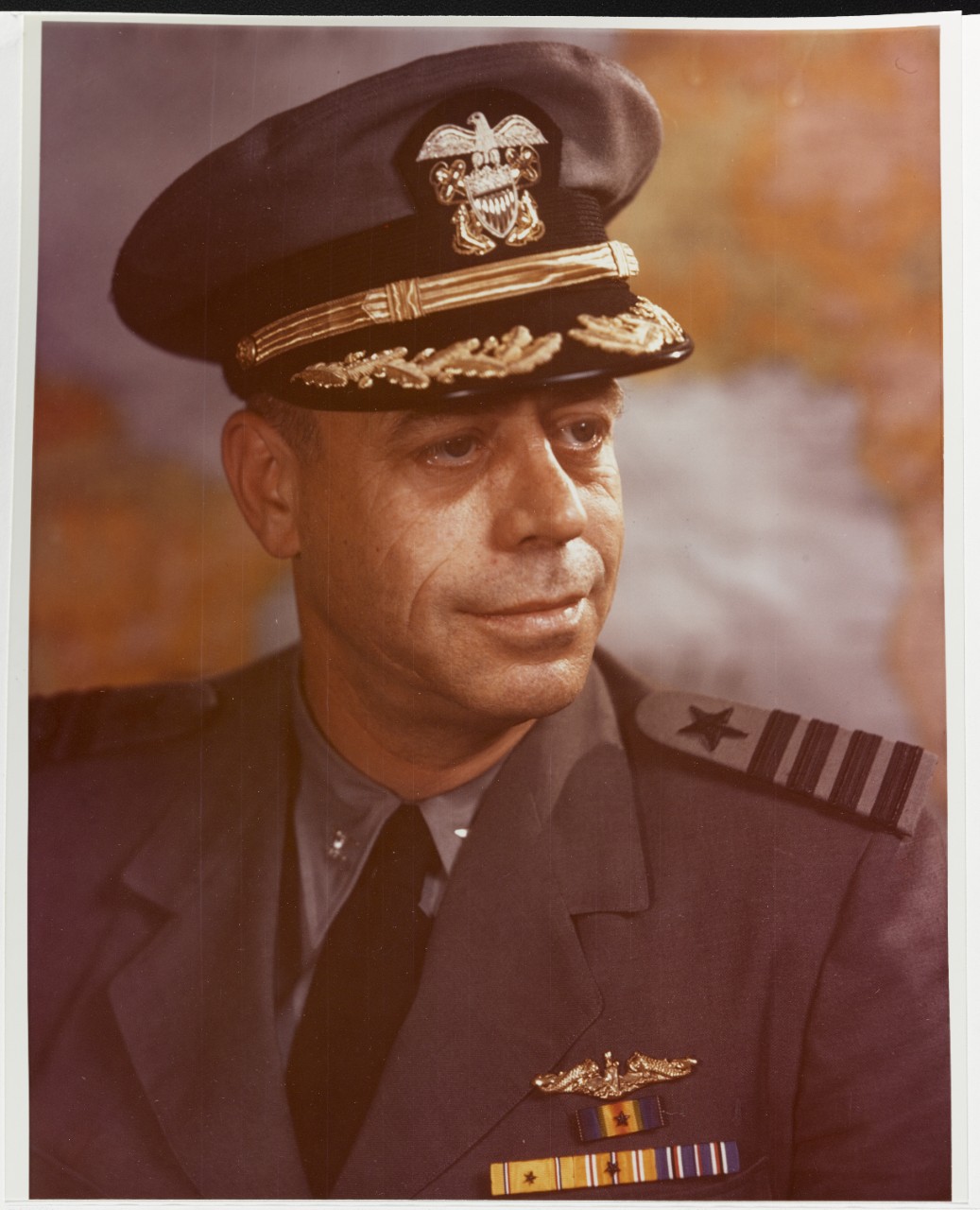 Allan Rockwell McCann, born in North Adams, Massachusetts, on 20 September 1896, attended Mark Hopkins Grammar School and Drury High School in North Adams before his appointment to the US Naval Academy from the First District of Massachusetts in 1913. Graduated and commissioned ensign in March 1917, he was assigned to USS Kansas (Battleship No.21) in which he served throughout the World War and until September 1919. Following instruction in submarines aboard USS Fulton (Submarine Tender No.1) at the Submarine Base, New London, Connecticut, he joined USS K-6 (Submarine No. 37) in January 1920, serving in command of that submarine from May to September of that year. Assigned duty in connection with fitting out USS S-19 (Submarine No. 124) he was detached in January 1921 before the commissioning of that submarine. He subsequently commanded the submarines N-4 (SS-56) and L-3 (SS-42) until June 1922. He transferred to USS R-2l (SS-98) at Coco Solo, Canal Zone, serving in command of that submarine until she was decommissioned in June 1924.

In July 1924, returning to the Submarine Base at New London, he served as an Instructor in Diesel Engineering for one year. He then was transferred to duty as Chief Engineer and Repair Officer of that Base. In November 1925 he was assigned additional duty as Technical Advisor to the Peruvian Naval Commission at the Electric Boat Company, Groton, Connecticut, and when detached in October 1926, he commanded the submarine USS S-46 (SS-157), based on Coco Solo, Canal Zone, until May 1929. He then served in the Design Division, later in the Maintenance Division, Bureau of Construction and Repair (now Bureau of Ships), Navy Department, Washington, DC, for two years, July 1929-1931. During that tour of duty he was assigned to diving operations in connection with development of submarine escape apparatus, and was in charge of the development of a submarine rescue chamber.

From August 1931 until June 1934, he commanded the submarine Bonita (SS-165). He had consecutive duty with the Board of Inspection and Survey, Pacific Coast Section, at San Francisco, California, and at Long Beach, California. He joined USS Indianapolis (CA-35) in April 1936, and served as First Lieutenant and Damage Control Officer of that cruiser until June 1937. Transferred to duty as Damage Control Officer on the staff of Commander Cruisers, Scouting Force, USS Chicago (CA-29), he served in that assignment until June, 1938.

Returning to the Navy Department in July, 1938, he reported for duty as Planning Officer, Personnel Division, Bureau of Navigation (now Bureau of Naval Personnel), and in May, 1939, was ordered to duty in connection with salvaging USS Squalus (SS-192) sunk during a trial run off Portsmouth, New Hampshire. As a member of the Squalus Salvage Unit, he played an important part in the rescue of the 33 survivors and the salvage of the stricken submarine. He received a "Well Done" commendation from the President of the United States for the success of this extremely difficult operation.

When detached from the Navy Department in April 1941, he assumed duty in May as Commander, Submarine Squadron 7, Atlantic Fleet, and was serving in that command when the United States entered the war in December 1941. In January 1943 he was assigned additional duty in temporary command of Task Force 51 and Senior Representative of Commander Submarines Southwest Pacific.

For his services in those assignments he was awarded the Legion of Merit, the citation stating in part, "...Demonstrating exceptional ability and untiring devotion to duty as Squadron Commander, (he) inspired the officers and men under his command to the successful completion of dangerous and vital missions...His brilliant leadership and proficient execution of many difficult tasks were reflected in the splendid material conditions of all units of this task force and the excellent morale of his men, resulting in a tremendous toll in enemy shipping."

In April 1943, he had orders transferring him to duty as Commander, Submarine Squadron 6, and in September 1943 he returned to the United States. He was assigned for a tour of shore duty in the Fleet Maintenance Division, Office of the Chief of Naval Operations, Navy Department, and served until July 1944. He was given command of the battleship USS Iowa (BB-61) and from 16 August to 28 November 1944 was in the Western Pacific. The Bronze Star Medal was awarded to him "For heroic service as Commanding Officer of USS Iowa, in action...Fighting his ship with determined aggressiveness during powerful raids executed in coordination with other units of the United States Fleet, Rear Admiral McCann consistently blasted the formidable defenses of strongly held enemy positions and...contributed essentially to the success of our forces during a prolonged period of fierce hostilities in the Pacific Theatre..."

In December 1944 he reported to Headquarters, Commander in Chief, U.S. Fleet, Navy Department, and was assigned as his Assistant Chief of Staff (Anti-Submarine), and Chief of Staff to the Commander, Tenth Fleet, serving under immediate direction of Fleet Admiral Ernest J. King, USN. The Tenth Fleet, a fleet without a ship, was a highly specialized command, flexible in that it could call upon the surface and air forces of the Atlantic Fleet and the Sea Frontier Forces as needed for special assignments, and was organized to exercise unity of control over the Navy's war against the U-boat operations in the Atlantic from Iceland to Cape Horn. The Tenth Fleet was dissolved in June 1945, and Rear Admiral McCann was transferred to duty on the staff of the Commander in Chief, Atlantic Fleet, and was subsequently designated Commander, Task Force 68, in the light cruiser USS Philadelphia (CL-41) during the Presidential trip to Berlin, 4 July to 8 August 1945.

He was commended by President Harry S. Truman on 7 August 1945 for completing this most important mission, and for this duty he was awarded a Letter of Commendation with Ribbon by the Commander in Chief, Atlantic Fleet. He also was awarded a Gold Star in lieu of a second Legion of Merit "For exceptionally meritorious conduct in the performance of outstanding services...as Chief of Staff, Tenth Fleet, and as Assistant Chief of Staff (Operations) to the Commander in Chief, United States Fleet, from January to August 1945. Through his extensive experience and his knowledge of submarine warfare, (he) brought to a successful conclusion the war against the German submarine and later...directed the operations of United States Fleet Forces. He has contributed materially to the successful prosecution of the war.

He again served as Assistant Chief of Staff (Operations), on the staff of the Commander in Chief, US Fleet, from 20 August to 10 October 1945. In accordance with the reorganization of the Navy resulting from Executive Order 9635 of 29 September 1945, his title was changed to Head, Fleet Operations Section, Operations Division, under the Office of the Chief of Naval Operations, Navy Department. On 18 December 1945, he assumed duty as Commander, Submarine Force, U.S. Pacific Fleet, aboard light cruiser Fargo (CL-106) at the Submarine Base, Pearl Harbor, Territory of Hawaii.

In addition to the Legion of Merit with Gold Star in lieu of the second Legion of Merit, the Bronze Star Medal, and the Commendation Ribbon, Vice Admiral McCann has the Victory Medal, Atlantic Fleet Clasp (USS Kansas), the American Defense Service Medal, with Fleet Clasp; the Asiatic-Pacific Campaign Medal; European-African-Middle Eastern Campaign Medal, and WWII Victory Medal. He subsequently progressed in grade until his promotion to Rear Admiral, 25 March 1943. He transferred to the Retired List of the Navy on 1 May 1950, and advanced in rank to Vice Admiral.