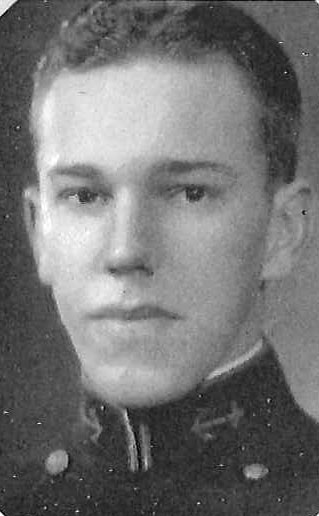 A native of Des Arc, Arkansas, Admiral Becton entered the Naval Academy in 1927 and was graduated and commissioned Ensign on June 4, 1931. Early in his naval career, he served in the battleships Texas and Arkansas, the destroyers Preston and Breckinridge, and from August 1935 until January 1938 on Asiatic Station, as Engineer Officer of the gunboat Guam and destroyer Pope. He returned to the Naval Academy in June 1938, and while on duty as an Instructor in the Department of Marine Engineering made the Midshipman’s cruise in 1939 on board the Texas.

He was serving as Executive Officer of the destroyer Aaron Ward at the outbreak of World War II, and later served as her Commanding Officer prior to her sinking following a Japanese air attack in the Guadalcanal Tulagi Area on April 7, 1943. In May, he became Operations Officer on the Staff of Commander Destroyer Squadron 21, attached to the flagship Nicholas, which won the Presidential Unit citation for outstanding performance on the night of July 5-6, 1943. He was personally awarded the Silver Star Medal, and a Letter of Commendation from Commander South Pacific Force.

At her commissioning on February 8, 1944, he assumed command of USS Laffey, and for meritorious performance as that destroyer’s Commanding Officer during the amphibious assault on Normandy and bombardment of Cherbourg, France, was awarded a Gold Star in lieu of the second Silver Medal, and the French Croix de Guerre with Star. Transferring to the Pacific area, the Laffey won the Presidential Unit Citation, and he personally awarded the Navy Cross and Gold Stars in lieu of the third and fourth Silver Star Medals. Prior to the cessation of hostilities, he was ordered to the Navy Department and on August 12, 1945, reported to the Training Activity of the Bureau of Naval Personnel, serving in 1946 as Officer in Charge of the Enlisted Training Section.

He completed the Personnel Administration and Training course at Northwest University in June 1948, and after duty as Executive Officer of the cruiser Manchester, September 1948 to April 1949, had fifteen months’ duty as Commander Destroyer Division 202, his pennant n USS A. M. Sumner. He again served n the Bureau of Naval Personnel, and after brief instruction in 1952, commanded the USS Glynn, a transport for two years. He completed a tour of duty in the Office of the Chief of Naval Operations as Assistant to the Director of the Surface-Type Warfare Division and Head of the Combined and Joint Training, and under orders of September 20, 1956, commanded the battleship Iowa.

Assigned to the Navy Department in 1958, he was Director of the Enlisted Personnel Division, Bureau of Naval Personnel and later had instruction in the Office of the Chief of Naval Operations. He next served as Executive Officer to the Personnel Directorate, Joint Staff, Joint Chiefs of Staff, Washington, DC.

In September 1959 he became Commander Cruiser Division FIVE, and in July 1960 was assigned additional duty as Commander Mine Force, Pacific Fleet. A month later he relinquished command of Cruiser Division FIVE, continuing to command Mine Force, Pacific Fleet and from September 30, 1960 had additional duty as Commander Naval Base, Los Angeles, California. In October 1961 he reported as Commander Naval Reserve Training Command, Omaha, Nebraska and in September 1964 assumed duty as Naval Inspector General, Navy Department. In September 1965 he was designated Deputy Naval Inspector General and served in that capacity until relieved of active duty pending his retirement, effective July 1, 1966.

Transferred to the Retired List of the US Navy, July 1, 1966

Commendation Ribbon with one Bronze Star and Combat “V”

Croix de Guerre with Gold Star, by Government of France

Navy Cross: “For extraordinary heroism as Commanding Officer of the USS Laffey in action against enemy Japanese forces off Okinawa, on April 16, 1945. With his ship under savage attack by thirty hostile planes, Commander Becton skillfully countered the fanatical enemy tactics, employing every conceivable maneuver and directing all his guns in an intense and unrelenting barrage of fire to protect his ship against the terrific onslaught. Crashed by six of the overwhelming aerial force which penetrated the deadly antiaircraft defense, the USS Laffey, under his valiant command fought fiercely for over two hours against the attackers, blasting eight of the enemy out of the sky. Although explosions of the suicide planes and two additional bombs caused severe structural damage, loss of armament and heavy personnel casualties, Commander Becton retained complete control of his ship, coolly directing emergency repairs in the midst of furious combat, and emerged at the close of the action with his gallant warship afloat and still an effective fighting unit…”

Silver Star Medal: “For conspicuous gallantry and intrepidity as Operations Officer on the Staff of Commander Destroyer Squadron Twenty-One on the Flagship USS Nicholas in night engagements with enemy surface forces n the Solomon Islands Area, July 5 to 13 and August 17-18, 1943. With complete understanding of objectives and tactics, (he) expertly assisted and advised his Squadron commander in controlling and coordinating the attacks of the vanguard destroyers of a cruiser-destroyer force in which several enemy ships were sunk and many damaged. In a subsequent skillfully planned assault, his flagship led a destroyer division against an attacking force and by combined gun and torpedo fire, caused the destruction of two destroyers, severe damage to a third and the annihilation of a number of landing barges…”

Gold Star in lieu of the second Silver Star Medal: “For meritorious performance of duty as Commanding Officer of the USS Laffey during the amphibious assault on Normandy, France in June 1944, and the bombardment of enemy defenses at Cherbourg, France, June 25, 1944. Commander Becton maneuvered his ship through heavily mined waters and under heavy and accurately controlled gunfire from enemy shore batteries, protecting vessels in the Western Task Force Area from enemy surface forces and submarines. During the bombardment of Cherbourg, though the USS Laffey suffered light damage from superior enemy gunfire and was subjected to further heavy and accurate fire (he) courageously maintained a continuous fire on the superior batteries to cover the retirement of the minesweepers and battleships, and…interposed himself between the shore batteries and the other units of the bombardment group to divert the fire of the shore batteries from those units. Later in the action when again subjected to heavy enemy fire that straddled the USS Laffey, (he) skillfully maneuvered his ship to evade the fire and placed his ship in a position to cover with gunfire or smoke the battleships then retiring out of range of enemy batteries…”

Gold Star in lieu of the third Silver Star Medal: “For conspicuous gallantry and intrepidity as Commanding Officer of the USS Laffey during action against enemy Japanese forces off Ormoc Bay, Layte, Philippine Islands, on December 7, 1944. Fighting his ship gallantly in the face of withering fire from hostile shore batteries and constant attack by enemy aircraft, Commander Becton boldly directed the Laffey’s accurate, determined gunfire against the heavily fortified hostile shores to neutralize Japanese defenses and pave the way for our assaulting troops. With a strong force of enemy aircraft attempting to bomb and crash our ships during retirement, he brought his powerful antiaircraft guns to bear with deadly accuracy, thereby providing an effective screen for the convoy and insuring a safe withdrawal…”

Gold Star in lieu of the fourth Silver Star Medal; “For conspicuous gallantry and intrepidity as Commanding Officer of the USS Laffey during action against enemy Japanese forces in the Philippine Islands Area in January 1945. Boldly penetrating dangerous restricted waters of Lingayen Gulf during the initial bombardment and assault at Luzon, Commander Becton fought his ship gallantly despite persistent attacks by hostile aircraft and devastating fire directed from Japanese shore batteries, successfully carrying out extensive antiaircraft screening missions, and bombardment of heavily fortified positions on the beach and providing effective fire support for underwater demolition units. By his ship-handling, brilliant leadership and zealous devotion to duty in the face of grave peril, (he) contributed materially to the success of our forces in recapturing the Philippines…”

Commendation Ribbon: “About 1045 on the night of November 12-13, 1942, our forces engaged units of the Japanese fleet in the Guadalcanal Area. During this action the ship suffered 9 direct hits and had a total of 70 casualties, killed and wounded. During the latter stages while action was still in progress, Lieutenant Commander Becton made several trips to the firerooms and engine rooms in order to attempt to keep them in operation and establish communications with the bridge. Immediately after the ship went dead in the water, he took complete charge of the engineering department and under extremely difficult circumstances and by exceptional effort, regained power, enabling the ship to open the firing range of an enemy battleship. It is considered this action was vitally instrumental in saving the ship, as we were shelled by this battleship at a later time, and no further hits were obtained on the ship.”

Bronze Star in lieu of second Commendation Ribbon: “For skillful and effective performance of duty as Operations Officer on the staff of commander Destroyer Squadron Twenty-One in the night engagements with enemy Japanese surface forces off Kolombangara Island, New Georgia Group, Solomon Islands, on July 5-6, and July 12-13, 1943. On both occasions the squadron flagship led the destroyers in the van and attacked enemy ships with guns and torpedoes. As a result of these attacks several enemy ships were destroyed and damaged. By his courage and performance of duty under fire, (he) materially assisted the squadron Commander in controlling and coordinating the attacks of the destroyers in the van…”

Presidential Unit Citation (USS Nicholas): “For outstanding performance in action against enemy Japanese forces off Kolombangara Island, New Georgia Group, Solomon Islands, on the night of July 5-6, 1943. After waging a vigorous battle as part of the small Task Force which destroyed a superior Japanese surface force, the Nicholas remained behind with an accompanying destroyer to save the survivors of the torpedoed USS Helena. Forces to clear the area on three occasions during rescue operations, she gallantly fought off continuing attacks by Japanese warships emerging from Kula Gulf and, with the other destroyer, sank or damaged an enemy light cruiser and two destroyers with deadly torpedo and gunfire, returning to the area after each onslaught to complete the heroic rescue of more than seven hundred survivors…”

Blue Star in lieu of second Presidential Unit Citation (USS Laffey): “For extraordinary heroism in action as a Picket Ship on Radar Picket Station Number One during an attack by approximately thirty enemy Japanese planes, thirty miles northwest of the Northern tip of Okinawa, April 16, 1945. Fighting her guns valiantly against waves of hostile suicide planes plunging toward her from all directions, the USS Laffey sent up relentless barrages of antiaircraft fire during an extremely heavy and concentrated air attack. Repeatedly finding her targets, she shot down eight enemy planes clear of the ship and damaged six more before they crashed on board. Struck by two bombs, crash-dived by suicide planes and frequently strafed, she withstood the devastating blows unflinchingly and, despite damage and heavy casualties, continued to fight effectively until the last plane had been driven off. The courage, superb seamanship and indomitable determination of her officers and men enabled the Laffey to defeat the enemy against almost insurmountable odds…”