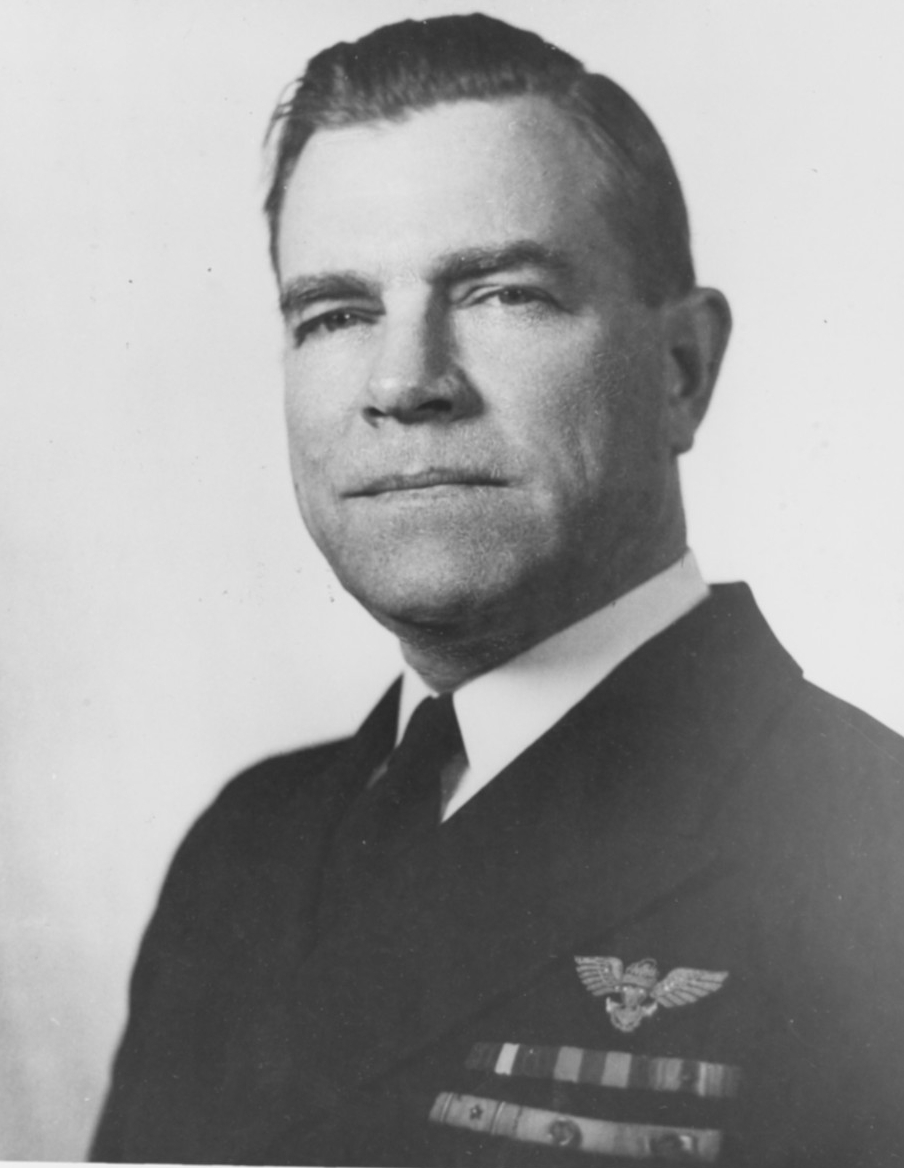 Patrick Nelson Lynch Bellinger was born in Cheraw, South Carolina on 8 October 1885. After attending Clemson College for a short term, he entered the US Naval Academy from South Carolina in 1903 and was graduated 6 June 1907. He was assigned to the USS Vermont in July 1907, and sailed in her on 16 December, from Hampton Roads, Virginia, for a cruise around the world with the Battle Fleet. On 12 May 1908, he was transferred to the USS Wisconsin at San Francisco, and completed the cruise in that battleship. He was commissioned Ensign on 7 June 1909, after serving the two years at sea then required by law, and subsequently attained the rank of Vice Admiral to date from 5 October 1943. He was transferred to the Retired List of the Navy on 1 October 1947.

After the completion of the world cruise, he had instruction in torpedoes in the USS Montgomery from May until October 1909, after which he assisted in fitting out and served in the USS South Carolina until April 1912. Reporting to the Atlantic Submarine Flotilla on 19 April 1912, he had submarine instruction, attached to the USS Severn, until September 1912, when he assumed command of the submarine C-4. Two months later, in November 1912, he was assigned aviation duty at the Naval Academy.

In January 1913, he was ordered to Guantanamo Bay, Cuba, for duty in connection with the aviation camp to be established there, taking passage in the battleship South Carolina on 16 March. This was the first time that naval aviation accompanied the Fleet on its winter maneuvers in the south, and it demonstrated its ability in scouting and in locating mine fields and submarines. On 5 March, he was detailed on aviation duty as a flyer of heavier than air aircraft and on 13 June, made the American seaplane record of 6,200 feet.

On 14 January 1914, he reported to the USS Orion, and in her proceeded to Pensacola, Florida, where the first Naval aviation training station was being established, taking all aviation equipment. There he joined the USS Mississippi, and from 24 April until 12 June 1914 was in charge of the Navy's Aeroplane Section at Vera Cruz, Mexico, during the occupation of that port. In that duty he made flights over the enemy's territory and was under fire by ground troops. His plane was struck on one occasion by rifle bullets. This was the first occasion when a US airplane was under enemy fire.

He served in the USS North Carolina, aviation training ship, from July to December 1914, and in January 1915, returned to the Naval Aeronautics Station, Pensacola, Florida. On 21 January he was designated Naval Air Pilot No. 4. During that tour of duty at Pensacola, in the rank of Lieutenant (jg), he accomplished the following outstanding feats in aviation:

13-18 February 1915. Piloted flying boat AB-3, in accordance with instructions from the Secretary of the Navy, from Pensacola, Florida, to Mobile, Alabama, to give demonstration during the Mardi Gras Carnival. This was the first extended flight of this kind ordered and carried out.

25 July - 25 August 1915. In charge of Special Aviation Section, cooperating with Army, and spotting Experimental Mortar Firing, at Fortress Monroe, Virginia. Piloted, spotted and signaled solo in Burgess-Dunne, AH-10. Used combination of Very pistol for signaling. This is the first actual instance in the Navy where Navy Aircraft spotted actual gun or mortar fire.

March 1916. At sea, off Guantanamo Bay, Cuba, spotted for battleships firing at regular target at sea. First instance of spotting of this nature in Navy. Duration of flights averaged approximately 1 hour, 50 minutes.

Detached from the Naval Air Station, Pensacola, in May 1916, and as Lieutenant, he rejoined the USS North Carolina, with duty in connection with aeronautics. In April 1917, he returned to duty at Pensacola, and on 9 May 1917, he conducted the first night seaplane flight in which floodlights were employed on the beach for illuminating water. This marked the first phase of regular night flying instruction in the Navy. 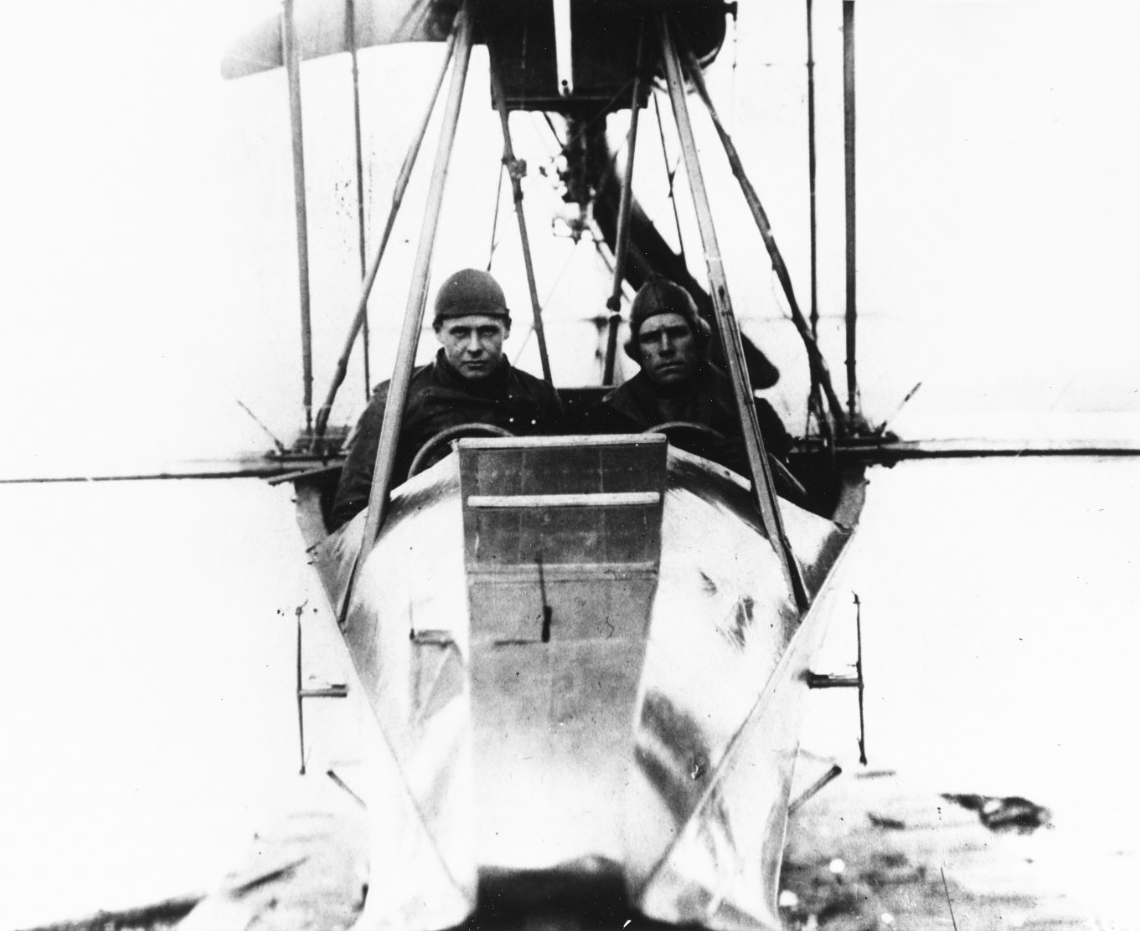 In the rank of Lieutenant Commander, he had command of the Naval Air Station, Hampton Roads, Virginia, from December 1917 until March 1919. In May 1919, he participated in the first trans-Atlantic flight as Commanding Officer of the NC-1, and was awarded the Navy Cross with the following citation: "For distinguished service in the line of his profession as commanding officer of the seaplane NC-1 which made a long overseas flight from Newfoundland to the vicinity of the Azores in May 1919."

Attached to the Office of the Chief of Naval Operations, Navy Department, Washington, DC, until August 1921, he was transferred to the Bureau of Aeronautics, upon its organization. He served with Aircraft Squadrons, Pacific Fleet, and Aircraft Squadrons, Scouting Fleet, from October 1921, until June 1923, when he joined the USS Wright, aircraft tender, with duty involving flying. He became Executive Officer of that vessel in September 1925. After completing the course at the Naval War College, Newport, Rhode Island, and serving on its staff for several months, he reported in December as Aide and Fleet Aviation Officer, on the Staff of Commander in Chief, Battle Fleet. He continued staff duty with Commander in Chief, US Fleet from 4 September 1926, until 8 November 1927 with additional duty as Fleet Aviation Officer.

After a brief assignment to the Ships Movement Section, in the Office of the Chief of Naval Operations, he served as assistant Naval Attaché at the American Embassy, Rome, Italy, from 28 July until May 1931. Upon his return to the United States, he assumed command of the USS Wright, aircraft tender, in July of that year. He had command of the USS Langley from July 1932 until June 1933, when he was ordered to the Bureau of Aeronautics, Navy Department, Washington, DC, where he was in Charge of the Plans Division and later of the Administrative Division. He was Commanding Officer of the USS Ranger from June 1936 until June 1937 when he was transferred to duty as Chief of Staff and Aide to Commander, Aircraft Battle Force, and Carrier Division One, US Fleet.

Following command of the Naval Air Station, Naval Operating Base, Norfolk, Virginia, from July 1938 until November 1940, he proceeded to Honolulu and assumed command of Patrol Wing TWO, with the rank of Rear Admiral. In May 1942, he was ordered to duty as Commander Patrol Wings, Pacific Fleet, and in August 1942 was appointed to Deputy Chief of Staff to the Commander in Chief, US Fleet. He served in that capacity until March 1943, when he was designated Commander Air Force, Atlantic Fleet. On 5 October 1943, he was appointed Vice Admiral, retaining this command. For "exceptionally meritorious service to the Government of the United States in a duty of great responsibility as Commander Air Force, Atlantic Fleet, from March 1943 to February 1946..." he was awarded the Distinguished Service Medal. The citation continues in part:

"...A resourceful and aggressive administrator, (he) exercised keen foresight and sound judgment in organizing the Air Force of the Atlantic Fleet and subsequently in directing its expansion, development and operations and, by his superior knowledge of aeronautical and naval problems and his thorough comprehension of the tasks assigned him, discharged his myriad duties expeditiously and effectively, contributing in large measure to the protection of Allied shipping in the Atlantic. As a result of his forceful leadership and expert methods, new carriers and carrier aircraft units of the United States Fleet were trained to an efficient state of combat readiness and the carriers in the Pacific theater of war were highly successful in their operations against the enemy..."

On 7 March 1946, Vice Admiral Bellinger reported for duty on the General Board, Navy Department, Washington, DC. On 7 July 1947, he was ordered relieved of active duty pending retirement, and on 1 October 1947 he was transferred to the Retired List of the US Navy in the rank of Vice Admiral. After retirement he served for ten years as President of the Craig-Botetourt Corporation. He died at Clifton Forge, Virginia on 29 May 1962, survived by his wife, the former Miriam Benoist of "Earlehurst," Coventry, Virginia, a son and three daughters.

In addition to the Navy Cross and the Distinguished Service Medal, Vice Admiral Bellinger had the Mexican Service Medal; the World War I Victory Medal; American Defense Service Medal, Fleet Clasp; Asiatic-Pacific Campaign Medal; American Campaign Medal; and the World War II Victory Medal. He also has the rank of Commander, Military Order of the Tower and Sword, from the Government of Portugal; Officer of the Order of Saints Maurice and Lazarus, from the Government of Italy; and the Legion of Honor and the Croix de Guerre with Palm, from the government of France.