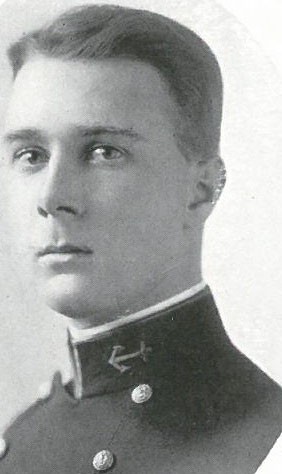 Rupert Meyrick Zimmerli was born in Lyons, New York, on 9 June 1898, son of Charles G. and Mary M. Zimmerli. Graduating from the Lyons High School in 1916, he was appointed a midshipman and entered the United States Naval Academy, Annapolis, Maryland, from the 36th Congressional District of New York. He served as a midshipman in the summer of 1918 aboard the USS Rochester on convoy duty across the Atlantic. Encountering two German submarines, a ship being convoyed was sunk by torpedoes. Graduated and commissioned Ensign in June 1920, with the Class of 1921, he was subsequently advanced in rank to Captain to date from 20 June 1942. Upon transferring to the Retired List of the Navy on 1 July 1950, he was promoted to Rear Admiral on the basis of combat awards.

Upon graduation in 1920, he was assigned to the USS Charleston, flagship of Destroyer Squadrons, Pacific Fleet, and served from July 1920 to October 1921. For the next four and a half years, he was attached for duty to destroyers of the Mine and Battle Force, Pacific. Arriving at Honolulu, Territory of Hawaii, in USS Bath, he reported on 7 November 1921 to USS Ingraham, and transferred the following January to USS Ludlow.

On 1 July 1926, he reported to the Naval Academy for post-graduate instruction in mechanical engineering. After one year, he continued the course at Columbia University, New York, New York, receiving the Master of Science degree from that university in 1928. He continued under instruction at various industrial plants, still under supervision of the Postgraduate School, until October 1928, when he reported for duty in USS Litchfield, flagship of Destroyer Squadron 12, Battle Fleet. He transferred in May 1930 to duty as Assistant Engineer Officer, Destroyer Squadron 10, later redesignated Destroyer Squadron 2, Battle Force, US Fleet, remaining in USS Litchfield until July 1931. He was then ordered to the Naval Academy, and had duty as an Instructor in the Department of Marine Engineering until May 1934.

Returning to sea duty, he joined USS Arizona on 1 June 1934, and after one year served in that battleship, with additional duty as Instructor on the staff of Fleet Machine Gun School, Guantanamo Bay, Cuba, he was appointed Assistant Engineer Officer, and served until 31 March 1937. After a two year tour served in the Bureau of Engineering, Navy Department, Washington, DC, he departed for the Asiatic Station, and on 3 October 1939 assumed command of USS Whipple, flagship of Destroyer Division 13, Asiatic Fleet. He transferred on 21 December 1940 to command of USS Paul Jones, Squadron Leader of Destroyer Squadron 5, Asiatic Fleet. When relieved of that command in August, 1941, he returned to the United States.

He was assigned duty in connection with fitting out USS Maumee, reporting to Maryland Dry Dock Company, Baltimore, Maryland. He commanded that oiler from 5 November 1941 to January 1943. He received from the Commander in Chief, Atlantic Fleet, the Letter of Commendation with Ribbon and combat distinguishing device V, stating in part: “On 29 October 1942 the Commander in Chief, US Atlantic Fleet, designated you, then Commanding Officer of the USS Maumee, as Commander Task Force 39, US Atlantic Fleet, and assigned you the task of convoying 28 light vessels from Hampton Roads, Virginia to French Morocco…”

Legion of Merit: “For exceptionally meritorious conduct . . . as Commander of Advanced Bases and Training Group, Tunisia and as Commander of the Joint Loading Control for all ships in an Amphibious Task Force during the period 12 May 12 to 19 July 1943. Assigned the difficult task of establishing and organizing the Advanced Amphibious Training Bases at Tunis and Bizerte, (he) executed his duties with outstanding professional skill and, in less than six weeks time, completed the assignment making possible the assembly and training of over four hundred ships and craft for the invasion of Sicily… coordinating the Army and Navy plans for loading of supplies, equipment and personnel, he supervised the operations with tireless enthusiasm . . . contributed immeasurable to the success of our forces in the invasion of Sicily.”

Gold Star in lieu of 2nd Legion of Merit, with Combat V: “For . . outstanding services to the Government of the United States as Commander of the Assault Section of a Major Task Force during the amphibious assault on Italy in September, 1943. Skillfully directing the movements of approximately fifty landing craft, (he) daringly pressed on toward the assigned beachheads in the face of severe enemy artillery fire. Subsequent to the assault, his Task Group efficiently maintained the British 46th Division over the beaches for more than two weeks despite hostile artillery fire which intermittently swept the area and our ships off shore. . .”

Gold Star in lieu of 3rd Legion of Merit, with Combat V: “For exceptionally meritorious conduct . . as Chief of staff to a Naval Task Force Commander, prior to and during the amphibious invasion of Southern France in August 1944. Effectively coordinating the activities of the Staff administrative and planning agencies during the intensive preparations for the conduct of this major assault operations, Captain Zimmerli was instrumental in solving numerous complex problems and , by his broad knowledge of the operational scope of a vast Task Force, rendered valuable service . . . contributing directly to the success of this vital operation. . . “

Following the invasion of Southern France, he was detached from the Eighth Amphibious Force, and reported to the Navy Department, Bureau of Naval Personnel, for temporary duty. He was then assigned to the Naval Academy for duty, reporting in September 1944. When detached in the summer of 1948, he assumed duty at Miami University, Oxford, Ohio, as Professor of Naval Science and Tactics, in connection with the Naval Reserve Officers Training Corps Unit. He was so serving upon his retirement from the Naval Service, effective 1 July 1950.

He was married in 1922 to Miss Majorie Howe Ross of Portland, Maine and passed away 6 December 1979 in Lyons, New York.