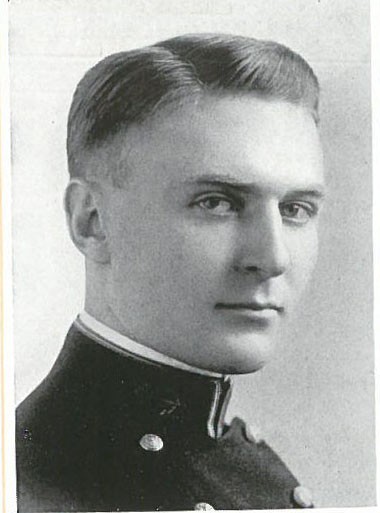 Walter Carson Calhoun was born at Philadelphia, Pennsylvania, May 13, 1894. Before entering the US Naval Academy in 1913, he had graduated from Southern Manual Training High School, Philadelphia, and attended University of Pennsylvania, School of Mechanical Engineering (Class of 1915). At the Naval Academy he was active in basketball, being captain of the team in 1917. He also played baseball. Graduated and commissioned Ensign on March 29, 1917, he advanced in rank as follows: Lieutenant (junior grade) October 3, 1917; Commander, April 8, 1937; Lieutenant Commander, November 13, 1927; Commander, April 8, 1937; Captain, January 2, 1942. He transferred to the Retired List of the Navy in the rank of Rear Admiral, effective June 30,1949.

Upon graduation, he was attached to USS Florida, of the Sixth Battle Squadron, Grand Fleet, and was present at the surrender of the German Fleet at the end of World War I. From July 25, 1921 to June 2, 1922, he was aboard USS Maryland. He was then ordered to duty at the Naval Academy where he served two years as Discipline Officer.

Returning to sea on September 14, 1924, he first served in the USS Huron (flagship of Chine Station), then was in command of USS Abercada until July 9, 1925, and the following year again served in USS Huron. From August to November, 1926 he was Chief Engineer of USS Henderson, of the Naval Transport Service. He was again assigned to the Naval Academy as an Instructor in Navigation, Gunnery, Physics, and Chemistry. In July, 1927 he reported to St. John’s College, Annapolis, Maryland, for duty as an instructor in Naval Reserves Officers Training Corps. Detached from that duty in September, 1928, he had orders to USS Vestal for duty as Navigator from the Vestal on April 15, 1931, he was assigned to the Navy Yard Washington, DC, as Aide to the Commandant, Naval Gun Factory, and in command of the Receiving Station there.

He was ordered to USS Pensacola on May 3, 1933, for duty as Gunnery Officer, and transferred on July 8,1935 to command of the USS Taylor (Special Service Squadron), and when relieved of that command, he reported, in May, 1936, to the New York Shipbuilding Corporation, Camden, New Jersey, and served as Inspector of Naval Ordnance until June 10, 1938. The following year, until June, 1939, he was under instruction at the Naval War College, he was ordered aboard USS Indianapolis, flagship of Commander Hawiian Detachment, Scouting Force, Pacific Fleet, for duty as Staff Gunnery Officer. Ordered in August, 1941to Mobile, Alabama, in connection with the conversion of the Crescent City to attack transport, he commanded that vessel from October to December, 1941.

From December, 1941 to March, 1943, he served in the Bureau of Naval Personnel, Navy Department, Washington, DC as Detail Officer. He was then ordered to place USS Baltimore in commission at Bethlehem Steel Company, Quincy, Massachusetts, and assumed command of that cruiser on April 15,1943. The Baltimore arrived at Pearl Harbor, October 18, 1943 and joined the Pacific Fleet. Operating with a carrier task group, the Baltimore participated in many of the major raids and battle operations in the Pacific and Asiatic Areas during 1943-44, including the bombardment of Japanese positions and successful occupation of Makin Island in the Gilbert Islands, raiding of Kwajalein Island (Marshall Islands), and bombing of Wotje Maleolap and Eniwetok atolls, first bombings of Truk Atoll in the Caroline islands, Saipan, Tinian, Palau, Woleai and Yap islands, and bombings and troop landings on Hollandia and New Guinea, the raids on Marcus, Wake and Guam. Finally she participated in the First Battle of the Philippine Sea, and raids on Iwo Jima and others.

For services in command of the USS Baltimore, he received a Letter of Commendation from the Commander in Chief Pacific Fleet, stating: “For gallantry in action and high professional excellence…Throughout these operations deep in enemy waters, he at all times handled his ship with conspicuous skill and courage and in the face of determined enemy aerial opposition maintained a position permitting the effective defense of the Task Group of which his ship was a part..” The Bronze Star Medal with combat distinguishing device “V” also was awarded him “For meritorious service as Commanding Officer of the Baltimore…from November, 1943 to June, 1944….”

Ordered to bring the Baltimore back to the United States to embark the President of the United States and his staff, in the late summer of 1944, a tour was then made of island bases, stopping at Hawaiian Island, Adak, Kodiak, and Juneau in Alaska. Returning from that tour, he was relieved of command of the Baltimore and on October 7, 1944 reported to the Office of the Chief of Naval Operations, Navy Department, Washington, for duty in connection with the disposal of Navy Surplus Property, Logistics Division, and in connection with devising programs of 1948. He was so serving with relieved of active duty pending his retirement on June 30, 1949.