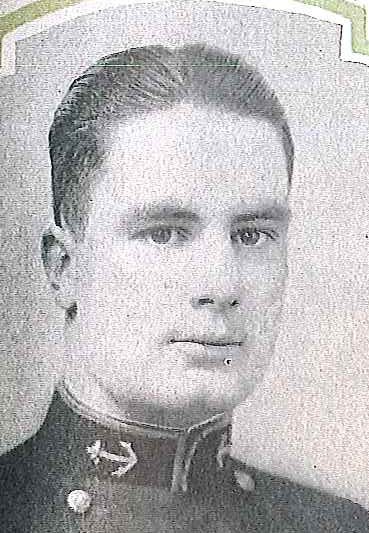 Robert Joseph Foley was born in East Orange, New jersey, January 30, 1905, son of Henry Joseph and Mary E. (McMahon) Foley. He attended Jamaica, New York, High School, and was employed in the New York Stock Exchange before his appointment to the U. S. Naval Academy from the Second District of New York in 1923. While attending the Academy he was a member of the Varsity boxing and track teams. In the latter sport, he established a new record in the high jump. Graduated and commissioned Ensign on June 2, 1927, he subsequently attained the rank of Captain to date from March 20, 1945.

After graduation in 1927, he remained at the Academy for the short course of instruction in aviation, and in August 1927 joined USS Florida in which he served until May 1930. He was next under instruction at the Naval Unit, Edgewood Arsenal, Edgewood, Maryland, completing the course in chemical warfare, and from July to December 1930, had instruction at the Submarine Base, New London, Connecticut. He served in USS S-41 with Submarine Division 10, Asiatic Fleet, from November 1930 until December 1933.

He joined the submarine R-2, based at New London, in April 1934, and served in her until June 1935. The two succeeding years he was under instruction at the Postgraduate School, Annapolis, where he completed the course in Applied Communications. After one month at the Submarine Base, New London, Connecticut, he reported to USS California in July 1937, serving in her for two years. From June 1939 until January 1940 he was Communications Officer on the Staff of Commander, Battleships, Battle Force, USS West Virginia, Flagship.

In January 1940 he joined USS Arizona and served as Communications Officer of that battleship until transferred in April 1941 to duty as Aide and Flag Secretary on the Staff of Commander, Battleship Division 2. He was aboard USS Tennessee during the Japanese attack on Pearl Harbor. In the spring of 1942 he was ordered to duty as Squadron Radio and Sound Officer of Submarine Squadron Four, transferring in July of that year to USS Greenling, from one war patrol. He received the ribbon for and a facsimile of the Presidential Unit Citation, Captain Foley was awarded the Navy Cross, and two Gold Stars in lieu of the second and third Navy Cross. The citations follow in part:

Navy Cross:  “For extraordinary heroism as Commanding Officer of USS Gato during the fourth war patrol of that vessel. Upon sighting a hostile convoy escorted by warships, Lieutenant Commander Foley, with bold skill and daring, maneuvered his ship into position to strike the enemy and launched a vigorous attack. Sinking one Japanese transport and three cargo vessels totaling 31, 700 tons, and damaging an unidentified ship, he successfully avoided detection and desperate anti-submarine counter measures on the part of enemy escorting vessels. . . . .”

Gold Star in lieu of second Navy Cross: “For extraordinary heroism . . . . . during three vital submarine patrols in enemy Japanese waters. Encountering strong hostile opposition and repeated depth charge attacks throughout this hazardous period, Commander Foley daringly and aggressively fought his ship at every opportunity, sinking three valuable hostile craft and damaging three others on each occasion skillfully evading the enemy and returning safe to base When his craft was severely depth charged during one action resulting in extensive hull damage and loss of power, he valiantly kept his crippled ship under control and brought her back for repairs without loss of personnel . . . . .”

Gold Star in lieu of Third Navy Cross:  “. . . . . Fighting his ship fiercely and with outstanding tactical skill, Commander Foley delivered smashing torpedo attacks against escorted hostile shipping and, by the bold and effective use of his deck guns, succeeded in destroying four enemy ships, including one heavily armed merchantman, out of a total of six sunk and another severely damaged during this hazard patrol. Employing expert evasive maneuvers under severe depth charge and aerial bombing attacks, he brought his ship through the fierce engagements without damage and returned her safe to port . . . .”

Presidential Unit Citation, USS Gato:  “For extraordinary heroism in action during her Fourth, Fifth, Sixth, Seventh, and Eighth War Patrols in enemy Japanese controlled waters in the Solomon Islands, Bismarck New Guineas and Truk Areas, from January 1943 to April 1944. Pursuing tenacious tactics in the face of strong surface and air opposition, the USS Gato penetrated hostile waters to track and close her targets, striking with swift fury and withdrawing safely to renew her relentless search for Japanese shipping and combatant vessels. By her accurate torpedo and gunfire, she sank 13 Japanese ships for a total of 66,000 tons and damaged 5 for a total of 31,500 tons . . . . This notable record of achievement under conditions of extraordinary difficulty and danger attests the Gato’s readiness for combat and the fighting spirit of her officers and men, thereby adding new luster to the traditions of the United States Naval Service.”

Completing the course at the Naval War College, Newport, Rhode Island, he reported in June 1950 to the staff of Commander Submarine Force, Atlantic Fleet. On July 1, 1952 he was relieved of his duty as Chief of Staff and Aide in that command, and ordered to the Bureau of Naval Personnel for further assignment. Under orders of August 12, 1952 he assumed command of USS Wisconsin (BB 64), and commanded that battleship for a year in the North Atlantic area, cruising to Norway, Rio de Janerio, Trinidad, Guantanamo Bay, and Haiti. Since his detachment in the fall of 1953, he has been assigned to the Office of the Chief of Naval Operations, first as Head of the Program Budget Branch, Logistic Plans Division, and later as Assistant Director of Logistics Plans Division.