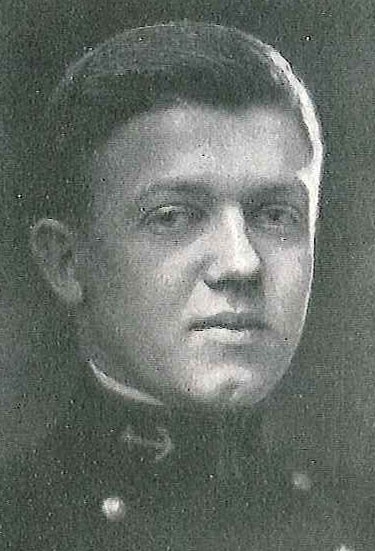 Richard Pierce Carlson was born on May 18, 1903, in Washington, DC, son of Carl A. and Amelia C. (Pierce) Carlson. He attended public schools and The Swavely School in Washington, and in 1918 was employed as a boat builder’s helper in construction of small boats and tugs. On June 16, 1920, he entered the U. S. Naval Academy on appointment as Midshipma, at large, and while there was a member of the class wrestling squad and varsity tennis team. He was graduated and commissioned Assistant Civil Engineer with rank of Ensign on June 5, 1924, and through subsequent promotions attained the rank of Captain in the Civil Engineer Corps, to date from June 1, 1943.

In July 1924, after graduation from the Naval Academy, he reported to USS Idaho, in which he served as Assistant Fire Control Officer and Division Officer until August 1925. In September he returned to Annapolis for instruction in Naval Construction at the Postgraduate School and, continuing the course at Rensselaer Polytechnic Institute, Troy, New York, he was graduated with the degree of Civil Engineer in June 1927 and a Master’s degree in Civil Engineering in June 1928. He has brief familiarization duty in the Bureau of Yards and Docks, Navy Department, and from October 1928 until June 1930 served as Assistant Public Works Officer at the Navy Yard, Pearl Harbor, TH.

During the last year of the war, he organized, completed, and operated, as Officer in Charge, the Advance Base Depot, Tacoma, Washington. For outstanding performance of duty  as Officer in Charge of that Depot, from July 15, 1944 to September 7, 1945, he received a Commendatory Letter from the Assistant Secretary of the Navy, dated February 4, 1946. The letter states that he “displayed great energy in pushing to completion construction of this Depot, which was urgently needed for the handling of the rapidly increasing shipments of equipment and material for the construction of advance bases. . .”

In October 1945 he reported to the Navy Department for duty first, in the Bureau of Yards and Docks as Assistant to the Director of Construction, and from February 1946 to January 1948 in the Industrial Survey Division of the Executive Office of the Secretary. He next served as District Public Works Officer and District Civil Engineer in the Seventeenth Naval District, with Headquarters at Kodiak, Alaska. Detached in October 1949, he reported to the Puget Sound Naval Shipyard, Bremerton, Washington, for duty as Public Works Officer, and additionally served until March 1952, as Public Works of the Naval Base there.

Duty from April 1952 until August 1953 as Assistant Chief of Staff for Base Development, on the staff of Commander Naval Forces, Marianas, included the assignment of Officer in Charge, Bureau of Yards and Docks Contracts. When detached, he returned to the United States, reporting in September 1953, as District Civil Engineer, Twelfth Naval District, San Francisco, California. He continues to serve in that capacity.

Captain Carlson is a member of the Society of American Military Engineers, and he is an enthusiast of golf, bowling, swimming, and photography.