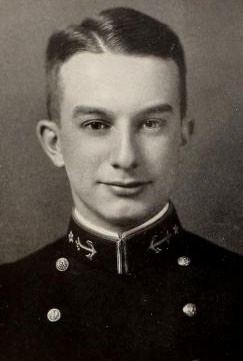 James Arthur Coddington was born in Peoria, Illinois, on August 18, 1914, son of Linton T. and Hilda H. (Hildebrand) Coddington. He received his early education from Peoria and Springfield public schools and entered the US Naval Academy, Annapolis, Maryland, from his native state on June 13, 1932. As a Midshipman he participated in soccer, wrestling and crew, was on the staffs the “Log” and “Lucky Bag” and was a member of the Musical Club. Graduated and commissioned Ensign on June 4, 1936, he was subsequently promoted, attaining the rank of Captain to date from August 1, 1954.

Detached from the Naval Academy after graduation in June 1936, and month’s duty there, he reported on board the USS Arizona in which he served in the various assignments of a junior officer from August 1936 to May 1938. He then had three years graduate instruction at the Rensselaer Polytechnic Institute, Troy, New York, from which he had graduated in June 1941 with the degree of Master of Civil Engineering, having transferred from the Line of the Navy to the Civil Engineer Corps in June 1940.

He next had twenty-one months duty as Resident Officer in Charge of Construction at the Naval Auxiliary Air Station, Weeksville, North Carolina, and in June 1943 reported as Public Works Officer at the Advanced Amphibious Base, Tenes, Algeria. He was Executive Officer of the 14th Naval Construction Regiments at Algiers, Algeria, between October and November 943, after which he served as the Public Works Officer at the Naval Air Station, Pearl Harbor, Territory of Hawaii.

During May and June 1945 he had temporary duty with the Service Force, US Pacific Fleet and in July 1945 joined the staff of Commander Naval Forces, Marshall-Gilberts Area. Immediately after the Japanese surrender he planned the rebuilding of Wake Island and from January to March 1946 served on the staff of Commander Naval Forces, Marianas as Base Development Officer. In May of that year he returned to the United States and became Officer in Charge of Construction at the White Sands Proving Ground, Las Cruces, New Mexico. In that assignment he also served as Officer in Charge of Construction, Bureau of Ordnance Civil Work, at Albuquerque.

In August 1948 he was assigned to the Executive Department at the Naval Academy, where he had duty for five months as Company Officer, seventeen months as Battalion Officer and as Officer in Charge of the Midshipman Detachment on board the USS Missouri during the Midshipman’s Practice Cruise (August- September 1949). Between July 1950 and August 1952 he has Budget Manager in the Shore Establishment Division, Officer of the Chief of Naval Operations, Navy Department, after which he was attached to the Charleston (South Carolina) Naval Shipyard as Public Works Officer. He remained there until September 1954 and the next month reported as Force Civil Engineer on the staff of the Commander in Chief, Naval Forces, Eastern Atlantic and Mediterranean.

For a year, August 1956 to June 1957 he was under instruction at the national War College, Washington, DC, and since July 1957 has been Pubic Works Officer at the Naval Academy with additional duty as District Public Works Officer, Severn River Naval Command.