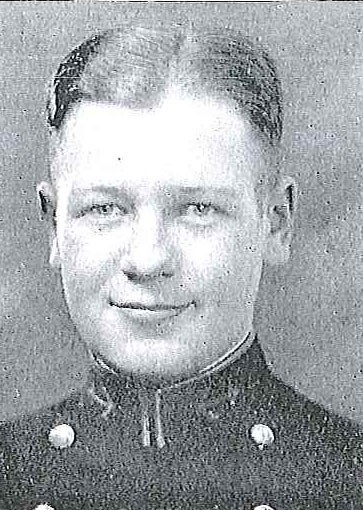 After graduation with the Naval Academy’s Class of 1928, Rear Admiral Archer had seven years at sea, serving in the battleship West Virginia, the ammunition ship Nitro, and the destroyer Dallas.  In 1935-1937, he had postgraduate instruction in Applied Communications, then served afloat as Communications Officer of the cruiser Memphis, and as Executive Officer and Navigator of the yacht Isabel and the destroyer Peary of the Asiatic Fleet.

In October 1941, he reported to Georgia School of Technology as an Instructor in the NROTC Unit, remaining there after the outbreak of World War II until November 1942.  He was Communications Officer of the aircraft carrier Essex the next year and, still attached to the Essex, served on the Staff of Commander Carrier Division ONE and Commander Task Groups 38.3 and 58.3 from January to November 1944.  The Essex won the Presidential Unit Citation, and he was awarded the Legion of Merit with Combat “V” for Staff duty from January 14 to November 5, 1944.

From March to August 1945, he commanded the destroyer Evans, a radar picket ship which was awarded the Presidential Unit Citation for service off Okinawa on May 11, 1945.  He was awarded the Navy Cross for extraordinary heroism as her Commanding Officer on that date when his ship “was subjected to attacks of an overwhelming force of enemy aircraft for one and one-half hours and (he) directed gunfire of his batteries in shooting down fifteen enemy planes and assisting in the destruction of four others…”  Four additional Kamikazes landed abroad.

He served as Head of the Board of Awards on the Staff of Commander Destroyers, Pacific, late in 1945, after which he briefly commanded Destroyer Division 122.  From March 1946 to May 1949, he was Head of the Operations Command Department of the General Line Schools at Newport and Monterey, successively.  He then commanded USS Comstock (LSD-19) for a year, during which she rescued personnel from USS Elder in the Pacific.

From July 1950 to August 1953, he was on the Faculty of the Armed Forces Staff College, Norfolk, and in September assumed command of Escort Destroyer Squadron SIX, his pennant in USS Berry.  In 1955, he served as Assistant Chief of Staff for Operations to Commander Military Sea Transportation Service, Pacific Area, and on February 27, 1956, was ordered to duty in the Ninth Naval District, Headquarters at Great Lakes, Illinois, as Assistant Chief of Staff for Operations.  He remained in that assignment until his transfer to the Retired List on July 1, 1958.

Retired 7/1/58 and advanced to R. Adm. on basis of citations awarded for combat

Navy Cross:  “For extraordinary heroism as Commanding Officer of the USS Evans, in action against enemy Japanese forces while assigned to Radar Pickett Duty Okinawa on May 11, 1945.  When his ship was subjected to attacks by an overwhelming force of enemy aircraft for one and one-half hours, Captain (then Commander) Archer directed the gunfire of his batteries in shooting down fifteen enemy planes and assisting in the destruction of four others.  Although the Evans was severely damaged by hits from four suicide planes and in a sinking condition, he led his crew in determined efforts to save the ship and bring her safe to port…”

Legion of Merit (Combat V):  “For exceptionally meritorious conduct…as Staff Watch Officer and Flag Communications Officer on the Staff of Commander Carrier Division One, during Fast Carrier Task Force offensive operations against enemy Japanese forces in the south, central and western Pacific, from January 14 to November 15, 1944…(He) contributed in large measure to the capture or neutralization of numerous enemy strongholds including Truk, Kwajalein, Eniwetok, Saipan, Guam, the Visayas and Manilla, and to the destruction of a major part of the enemy’s air and sea forces in this strategic area…”