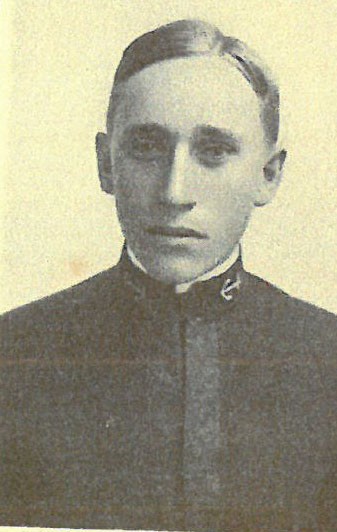 Captain Baker was born on September 6, 1886, at Lynchburg, Virginia, son of Henry Wallace Baker and Mrs. Emma (Polk) Baker. He received his early education in the public schools of Lynchburg and entered the US Naval Academy as Midshipman from Virginia on June 24, 1903. He was graduated on September 12, 1906, with the Class of 1907, and served the two years at sea, then required by law before being commissioned, in USS Tennessee. Commissioned Ensign in September 1908, he attained the rank of Captain on June 30, 1932. He was transferred to the Retired List of Navy on January 1, 1947.

Captain Baker served aboard USS Tennessee, USS St. Louis and again in the Tennessee, from his commissioning in 1908 until the summer of 1913, when he returned to the Naval Academy for two years’ duty as Assistant Discipline Officer. Ordered again to sea, he served consecutively from July 1915 to August 1918 aboard the battleships Georgia and Kansas. He was on duty as Engineer Officer of the latter vessel throughout the greater part of World War I, while she operated with the Atlantic Fleet.

Again returning to the Naval Academy, Captain Baker served as an instructor in the Department of Navigation from July 1918 until June 1920, during which period he had temporary duty aboard USS Wyoming, in connection with the Midshipmen’s cruise. He next reported to USS Connecticut as Navigator, and in December 1920 he assumed command of USS Scorpion, station ship at Constantinople, Turkey, and while in that command had additional duty in 1921 as US Naval Port Officer at Constantinople. Relieved on December 31, 1921, he returned to the United States via the Brazos, and reported to the Fifth Naval District Headquarters, Norfolk, Virginia, where he had duty from December 1922 until May 1925. He was designated, early in 1925, as senior member of the Fifth District Section of the Joint Merchant Vessel Board.

Early in the summer of 1925, Captain Baker proceeded to Asiatic Station, where at Shanghai, China, he assumed command of USS Rizal, and later became Commander, Mine Detachment, Asiatic Fleet. Transferred to command of USS Peary, he had additional duty as Commander Destroyer Division 43, Asiatic Fleet, until July 1926, when he again transferred, this time to command of USS Black Hawk Detached from Asiatic Station in November 1927, he returned to the Fifth Naval District for duty as Port Director, Naval Transportation Service, until June 1928.

After completing the Senior Course at the Naval War College in 1929, Captain Baker remained at Newport, Rhode Island, to serve for a year on the staff of the President. He returned to sea in May 193- as Executive Officer of the battleship Idaho and in 1931 became Aide in the staff of Commander Scouting Force, US Fleet (USS Augusta, flagship) in which capacity he remained until June 1932.

Captain Baker served as Head of the Department of Modern Languages, at the Naval Academy, Annapolis, Maryland, from July 1932 until June 1935, at which time he was ordered to duty in command of the heavy cruiser Houston. In the fall of 1935, USS Houston under command of Captain Baker, was assigned to special duty with the President of the United States, Franklin D. Roosevelt, for his cruise to Portland, Oregon. Captain Baker received a Letter of Commendation from the President following that cruise. He continued in command of the Houston until July 20, 1937, during which period the President made several other cruises aboard.

Captain Baker sailed for Buenos Aires, Argentina, where he served as Advisor to the Argentine Navy Department from August 1937 until August 1940. Thereafter he returned to the Navy Department, Washington, DC, for duty in the Office of the Chief of Naval Operations. Detached in April 1941, he became Chief of Staff and Aide to Commandant, Sixth and Seventh Naval Districts, with additional duty as Captain of the Yard, Navy Yard, Charleston, SC. Detached from the Seventh Naval District assignment in 1942, he continued the other duties throughout World War II, and during that period placed in commission many newly completed vessels of various sizes and types to become fighting units of the US Fleet.

In November 1945 Captain Baker was detached from the Sixth Naval District and reported in December of that year for General Court martial duty in the First Naval District, Boston, Massachusetts until he was relieved of all active duty in September 1946, pending retirement. He was transferred to the Retired List of the Navy on January 1, 1947.