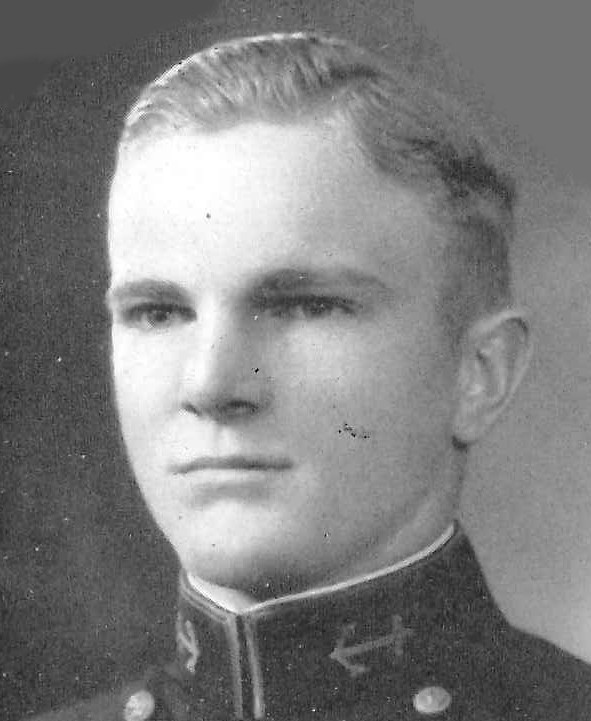 Raymond Henry Bass was born in Eaglette, Arkansas, on January 15, 1910, son of Mrs. Maud Wise Bass, and the late Henry Luther Bass.  He attended Thornton, Arkansas, High School, and had eighteen months’ enlisted service in the US Navy before entering the Naval Academy, Annapolis, Maryland, on appointment at large on June 28, 1927.  As a Midshipman he was a member of the Pep Committee; the Gymnastic Team, excelling in 1930 and 1931, and after graduation was a member of the Navy’s Olympic Team.  Graduated and commissioned Ensign on June 5, 1931, he subsequently attained the rank of Captain, to date from January 1, 1951.

Following graduation from the Naval Academy, he served for six months in the USS Lexington, returning to the Academy for a tour of duty, 1932-1933, and won First Place with the Navy Olympic Team at Los Angeles in 1932, while so attached.  He next has submarine instruction at the Submarine Base, New London, Connecticut, from July to December 1933, and from January 1934 to May 1936 served in the USS S-20, as Assistant Engineer and Electrical Officer.

In June 1936 he joined the USS Porpoise.  Two years later he was detached to attend the course in chemical warfare at the Edgewood, Maryland, Arsenal, June and July, 1938, and the Naval Postgraduate School until September 1939.  He served two months aboard the USS Concord, and in January 1940 joined the USS Snapper as Executive Officer and Navigator.  Nine months later he was ordered to Philadelphia, Pennsylvania, to fit out the USS O-2.  He commanded that submarine from her commissioning in February 1941 until May 1942, during the early months of the United States participation in World War II.

From September to December 1942 he served as Navigator (and prospective Commanding Officer) of the USS Porpoise, and in January 1943 assumed command of the USS Plunger.  For heroic service in that command he was awarded the Navy Cross (two awards), the Silver Star Medal, the Legion of Merit with Combat Distinguishing “V,” the Bronze Star Medal with Combat “V” and the Letter of Commendation with Combat “V.”  The citations follow in order of action for which received:

Navy Cross: “For extraordinary heroism as Commanding Officer of a submarine on patron in enemy Japanese-controlled waters.  With outstanding skill and courage, Lieutenant Commander Bass launched determined torpedo attacks on a convoy of five Japanese ships, sinking three and severely damaging two of the enemy vessels…”

Silver Star Medal: “For conspicuous gallantry and intrepidity as Commanding Officer of the USS Plunger during an aggressive and successful submarine war patrol in enemy-controlled waters…with courageous skill and efficiency, succeeded in sinking an important amount of Japanese shipping.  Despite vigorous anti-submarine measures on the part of the enemy, he managed to bring his ship through an extremely hazardous period without disabling damage…”

Gold Star in lieu of Second Navy Cross: “For extraordinary heroism as Commanding Officer of a United States Submarine during a War Patrol of that vessel in enemy Japanese controlled waters…(he) launched aggressive attacks on heavily escorted hostile convoys, tenaciously pursuing his targets despite severe enemy air and surface counterattacks and sinking four Japanese ships totaling more than 22,500 tons… he courageously and expertly directed his vessel and succeeded in bringing her to port without serious injury to the ship or crew…”

Bronze Star Medal: “For meritorious service as Commanding Officer of the USS Plunger, during the Eighth War Patrol of that vessel in enemy Japanese-controlled waters, from August 6 to September 5, 1943.  Operating his ship despite material casualties, (he) conducted repeated torpedo attacks against enemy shipping to sink two freighters totaling 9,000 tons and employing effective evasive tactics during severe enemy counterattacks, succeeded in returning his ship safe to port…”

Legion of Merit: “For exceptionally meritorious conduct in the performance of outstanding services to the Government of the US as Commanding Officer of the USS Plunger during the Ninth War Patrol of that vessel in enemy Japanese controlled waters from November 14 to December 13, 1943…Commander Bass boldly operated his ship on the surface as he conducted vigilant search for friendly airmen show down during the attack on Mille Atoll, diving only when immediate attack threatened.  While making a difficult approach in extremely rough seas to rescue a downed airman on November 22, a Japanese fighter suddenly appeared out of a rain squall and immediately executed a shallow dive, strafing the Plunger as he flew over and wounding one officer and five enlisted men before the bridge could be cleared…”

Letter of Commendation (by CinCPac): “For distinguishing himself by meritorious conduct in action in the line of his profession as Commanding Officer of a US submarine during a War Patrol of that vessel.  He delivered attacks against the enemy shipping which resulted in sinking more than 5,000 tons…”  He is also entitled to the Ribbon for and a facsimile of the Navy Unit Commendation to USS Plunger, as follows:

“For outstanding heroism in action against enemy Japanese shipping and combatant units in the Central and Southwestern Pacific Area during her Second War Patrol from June 9, 1942…to March 8, 1944.  Boldly penetrating hazardous enemy controlled waters in her extensive area coverage, the USS Plunger struck with devastating force in a series of brilliantly executed attacks.  Valiantly withstanding relentless opposition, she dealt crippling blows against the enemy, demolishing or severely damaging sixteen ships, including a light cruiser and two destroyers, for an impressive total of 108,045 tons.  The splendid achievements of the Plunger during the critical period of the war attest the superb seamanship and gallant fighting spirit of her officers and men and reflect the highest credit upon the United States Naval Service.”

Detached from the Plunger in March 1944, he had three months’ duty as Prospective Commanding Officers’ Instructor at New London, Connecticut, and in September of that year was ordered to Portsmouth, New Hampshire to fit out a new submarine, the USS Runner.  He commanded the Runner from her commissioning in February 1945, until January 1946, and “For exceptionally meritorious conduct…during the First War Patrol of that vessel in enemy controlled waters near the Japanese Homeland from 23 June to 24 July 1945…” he was awarded a Gold Star in lieu of the Second Legion of Merit, with Combat “V.”  The citation continues: “Skilled and persistent in the performance of his duties, Commander Bass successfully accomplished an extremely important mission in conjunction with Fleet operations.  In addition, he launched a torpedo attack to sink a 600-ton hostile vessel, successfully evading all enemy countermeasures…”

He was on his way to the Sea of Japan for a third time when he was ordered instead to lead a squadron of twelve submarines, “Benny’s Peacemakers,” into Tokyo Bay for the Japanese Surrender.  During the period January 1946 to May 1947 he has successive command of Submarine Divisions 61 and 62 in the Canal Zone and from June 1947 to August 1949 served as Operations Officer on the Staff of Commander Submarines, Atlantic Fleet.  A student for a year at the Naval War College, Newport, Rhode Island, he reported in July 1950 for duty in the Office of the Chief of Naval Operations, Navy Department, and in 1951 was the Navy Member of the Team in Copenhagen which negotiated the Greenland Base Rights Agreement.  Two years later he assumed duty as Commander Submarine Squadron 10, and on August 1, 1953 took command of the USS Rockbridge, an amphibious attack transport.  In July 1954 he returned to the Office of the Chief of Naval Operations to serve in the Strategic Planning Division and as Assistant to the Director, Long-Range Objectives Group.  Under orders of August 9, 1956, he commanded the USS Bremerton (CA-130) for a year, after which he again returned to the Office of the CNO.  There he served as Assistant Director, Mobilization & Projected Plans, General Planning Group until relieved of all active duty pending his retirement effective November 1, 1959.  Upon being transferred to the Retired List he was advanced to the rank of Rear Admiral on the basis of combat awards.