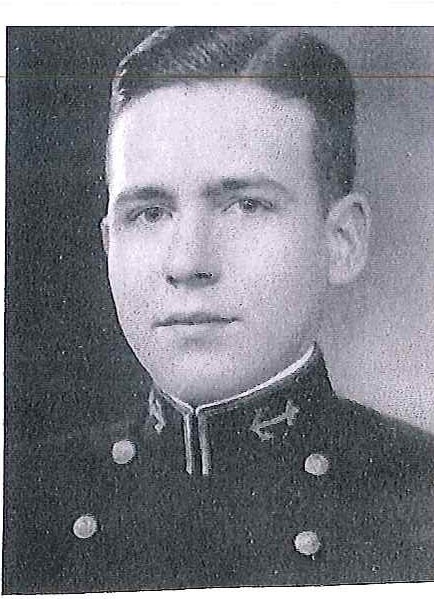 James Meacham Elliott was born on April 6, 1909, in Battle Creek, Michigan, son of Dr. James Adam Elliott and Mrs. (Agnes LaForge Meacham) Elliott. He attended Battle Creek (Michigan) High School and Michigan State College at East Lansing for two and one half years before his appointment to the US Naval Academy, Annapolis, Maryland, from his native state in 1929. Graduated and commissioned Ensign on June 1, 1933, he subsequently advanced in rank, attaining that of Captain to fate from January 1, 1952.

Following graduation from the Academy in 1933, he joined USS Arizona, and from June 1935 to February 1936 had duty as an Aviation Gunnery Observer with Observation Squadron TWO-B, aboard that battleship. Detached from Arizona, he returned to the United States for flight training at the Naval Air Station, Pensacola, Florida. Designated Naval Aviator on March 16, 1937, he remained at Pensacola until April of that year, when he was assigned to Bombing Squadron TWO-B based aboard USS Lexington. From July 1937 to June 1938 he was attached to Bombing Squadron FOUR, after which he reported aboard USS New Mexico for duty with Observation Squadron THREE.

Transferred to USS Mississippi in June 1940, he was Senior Aviator with Observation Squadron THREE until May 1941. Thereafter he was assigned to the Naval Air Station, Naval Operating Base, Norfolk, Virginia, serving as Gunnery and Project Officer with the Aircraft Unit. In July 1943 he reported for duty in the Armament Test Section, Naval Air Station, Patuxent River, Maryland, and in November of that year returned to sea as Air Officer aboard USS Chenango.

His services aboard that carrier escort entitled him to the Ribbon for, and a facsimile of the Navy Unit Commendation awarded the Chenango. The commendation states in part: “. . .Operating for long periods in the most advanced areas, the USS Chenango and her attached air groups penetrated hostile submarine infested waters to seek her targets and to destroy or damage Japanese warships, aircraft, merchant craft and shore facilities. . .”

Detached from the Chenango in November 1944, he served as Executive Officer and later Commanding Officer of USS Natoma Bay, which was awarded the Presidential Unit Citation, as follows: “. . .The USS Natoma Bay caused extremely heavy losses to the enemy in warships, aircraft, merchant shipping and shore installations destroyed or severely damaged. As Flagship of Task Unit 77.4.2 in the historic Battle for Leyte Gulf, the Natoma Bay fought her guns gallantly against enemy dive bomber and suicide planes, at the same time sending out her own aircraft to strafe and bomb Japanese Fleet units. . . . . . . . .Although crashed by a Japanese Kamikaze while participating in a heavy assault on Miayko Jima on June 7, she sent out 55 sorties form her damaged flight deck. . .” He also receiver a Letter of Commendation, with authorization to wear the Commendation Ribbon from the Commander SEVENTH Fleet, from services aboard USS Natoma Bay from December 10-19, 1944 and January 1-17, 1945.

Detached from command of the Natoma Bay in June 1946, he served as Executive Officer of the Naval Air Station, Mojave, California. He remained there until January 1947 when he became Commanding Officer of the Naval Air Facility, Inyokern, California. While there he also had additional duty as Assistant Experimental Officer for Air. He assumed command of Air Transport Squadron TWENTY ONE in July 1949, and continued to serve in that assignment until August 1950, when he joined the staff of Commander Fleet Logistics Wing, Pacific, as Chief Staff Officer.

In November 1951 he reported as Head of the Aviation Ordnance Branch, Bureau of Ordnance, Navy Department, Washington, DC, and in July 1954 became Commanding Officer of the Naval Station, Adak, Alaska. On April 26, 1955, he was ordered to similar duty at the Naval Air Station, Olathe, Kansas, and a year later was transferred to command of  USS Windham Bay (TCVU-92). When detached (orders of October 8, 1957) he became District Inspector General, Sixth Naval District, Headquarters at Charleston, South Carolina. On March 9, 1961, he was ordered as Commanding Officer, Naval Ammunition Depot, Bangor, Maine.

His hobbies are cabinet making and photography.