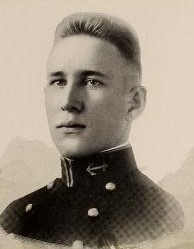 Captain Foster was born on January 16, 1899, at Hennessey, Oklahoma. He attended the Topeka High School, Topeka, Kansas and entered the U.S. Naval Academy, Annapolis, Maryland, from Kansas in 1915, a member of the class of 1919, which graduated June 6, 1918. Graduated and commissioned Ensign, he advanced progressively through the various grades to the rank of Captain to rank from June 17, 1942.

Captain Foster had World War duty while a Midshipman, aboard the USS Rhode Island from May 29 until August 22, 1917, and following graduation from the Academy in 1918, was assigned duty in the USS Oklahoma, operating with the British Grand Fleet during the latter part of the war. He reported in September 1923 at the Postgraduate School, Annapolis, Maryland, for instruction in ordnance engineering, continuing his instruction under the cognizance of the Postgraduate School at the Navy Yard, Washington, D.C; Ford Instrument Company, Long Island, New York; and at the University of Chicago, Chicago, Illinois, receiving the degree of Master of Science from the latter in 1926.

From June 1926 until April 1929, Captain Foster served aboard the USS Mexico, after which he had duty at the Navy Proving Grounds, Dahlgren, Virginia. On August 1, 1931, he was assigned to the Bureau or Ordnance, Navy Department, Washington, D.C., serving there until December 1937, when he was ordered to the Navy Yard, Mare Island, California. From June 24, 1941 to January 30, 1942 he served as Inspector of Ordnance in Charge at the Naval Ordnance Plant, Centerline, Michigan, with additional duty as Naval Inspector or Ordnance, Pontiac Division, General Motors Corporation, Pontiac, Michigan and had further additional duty as Naval Inspector of Ordnance, Chrysler Corporation, Detroit, Michigan. In January 1942, he was relived of the latter additional duty. He was again ordered to duty in the Bureau of Ordnance, Navy Department, and served in that assignment until October 1943, when he was detached and reported for duty at the Naval Proving Grounds, Dahlgren, Virginia. On February 16, 1945, he received orders to report at the U.S. Technical Mission Europe for temporary additional duty, and while in this assignment he was killed in a plane crash at Breancon, France on March 3, 1945. For his combined service during World War II he was awarded the Legion of Merit with the following citation:

“For exceptionally meritorious conduct in the performance of outstanding services to the Government of the United States as Inspector of Ordnance in Charge at the Naval Ordnance Plant, Centerline, Michigan, from December 1941, to January 1942, as Chief of the Guns and Mounts Section of the Research Division of the Bureau of Ordnance from January 1942, to October 1943; and as Ordnance Officer and Second in Command at the Naval Proving Grounds from October 1943, to February 1945. Demonstrating administrative ability and technical skill in each of these difficult assignments, Captain Foster rendered invaluable assistance in organizing and training competent staffs to insane a satisfactory quality of weapons, urgently needed for antiaircraft protection for our Fleet. In addition, he furnished advice on intricate manufacturing procedures and inspection techniques to contracting corporations, thereby paving the way for the delivery of ordnance material of the requisite quantity and quality. His devotion to duty was in keeping with the highest traditions of the United States Naval Service.”