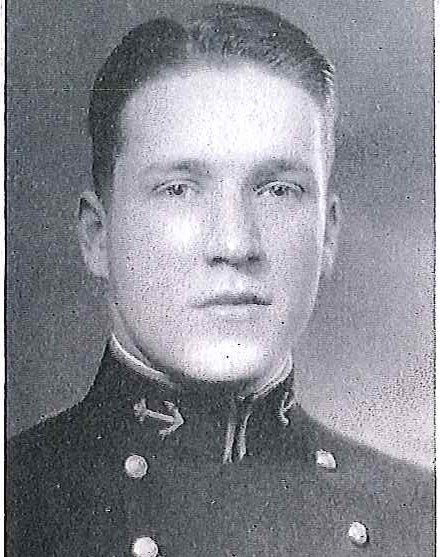 William Thomas Denton was born in Collingsville, Texas, on February 1, 1911, son of Mrs. Eula Lee (Strickland) Denton and the late Mr. Horace Brunen Denton. He entered the US Naval Academy, Annapolis, Maryland, from his native state on June 13, 1929, and was graduated on June 1, 1933, but not commissioned in the US Navy due to legislative action of the year before. As a Midshipman he excelled in athletics, being a member of the Gym Team – NAAU, and the Olympic Gymnastic Team of 1932; and an instructor in swimming and life saving.

During the period between his graduation from the Naval Academy and the beginning of World War II, he had active duty several times (training) including a short period from January 4, 1939, with the South Texas District Civilian Conservation Corps, San Antonio, Texas. He was employed by a Dallas oil company when ordered to active duty, on December 23, 1940, and for four months thereafter had instruction at Pennsylvania State College in the Naval Reserve Diesel Engineering Course.

On May 3, 1941, he reported to the American Shipbuilding Company, Cleveland, Ohio, for temporary duty with the Supervisor of Shipbuilding. He next assisted in fitting out USS Redwood at the Navy Yard, Portsmouth, New Hampshire, and on November 22, 1941, was assigned to the Commander Inshore Patrol, Cape May, New Jersey, where he was on duty when the United States entered the war.

On February 6, 1942, he was transferred to Headquarters, Fourth Naval District, Navy Yard, Philadelphia, Pennsylvania, and during the conversion of the Marmot (VP 221), was designated Officer-in-Charge. On July 14 he was ordered to Dravo Corporation, Pittsburgh, Pennsylvania, to fit out USS Direct, as prospective Commanding Officer.

He assumed command of that vessel on her commissioning, August 22, 1942, at New Orleans, Louisiana, and remained in command until June 1943.

After instruction at the Submarine Chaser Training Center, Miami, Florida, he was ordered to command of USS Charles R. Greer (DE 23), and commanded her from August 1943 until July 14, when he reported to the Twelfth Naval District for further assignment. On August 15 he reported to the Beach Battalion, School, Amphibious Training Base, Oceanside, California, and after two months’ duty was transferred to the Training Command, Amphibious Forces, Pacific Fleet (Administrative) at Coronado, California.

Detached from the Pacific Amphibious Training Command, he reported on April 13, 1945, to Commander Transport Squadron 19, and served on the Staff until June 5 of the same year, when he was first admitted to a Naval Hospital with an illness from which he never recovered.