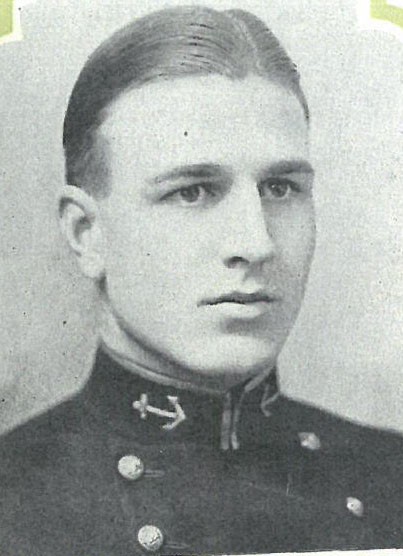 Leonard William Bailey was born in Cranston, Rhode Island, on January 11, 1905. Before entering the Naval Academy from the Second Congressional District of Rhode Island in 1923, he attended public schools in Cranston, and Marion Institute, Marion, Alabama. As a midshipman, he won his letter in track, and was a member of the wrestling and soccer teams. He graduated and was commissioned Ensign on June 2, 1927, and subsequently attained the rank of Captain to date from January 9, 1946. He was transferred to the Retired List of the Navy, on January 1, 1949 and advanced to the rank of Rear Admiral, on the basis of combat citations.

He remained at the Naval Academy for a summer course in aviation, and in August 1927 joined USS California at San Francisco, California. He served in that battleship until June 1928, when he was transferred to USS Hull, a unit of Destroyer Squadron, Battle Force. In February of the next year he reported for duty in USS MacFarland, a destroyer of the Scouting Force, Atlantic Fleet and served until June 1930 when he was ordered to the Naval Torpedo Station, Newport, Rhode Island for instruction. Three months later he rejoined the MacFarland, to serve as Torpedo Officer until she was decommissioned late in 1930.

His next assignment was in USS Whipple, operating with the Asiatic Squadron. His vessel was laid up for repairs at Shanghai during the first Japanese invasion on that city in 1932. In the three years of duty as Torpedo Officer of the Whipple he was twice commended by the Secretary of the Navy for high standing destroyer torpedo firing, and another commendation was awarded for improvement of methods and material connected with torpedo control.

Instruction in General Line duties at the Naval Postgraduate School from June 1934 until December 1935, was followed by duty at the Bethlehem Shipbuilding Corporation, Quincy, Massachusetts, in connection with fitting out USS Clark. He served as Gunnery Officer of the Clark from her commissioning in May 1936, until December 1938, when ordered to USS California, flagship of the Battle Force, US Fleet. In May 1940 he reported as Officer in Change of the Naval Fuel Depot, Melville, Rhode Island, later redesignated Commanding Officer of that Depot, and had additional duty as Commanding Officer of the adjacent Naval Net Depot.

In June 1942, he was detached to fit out the USS Murphy, (DD-603) then building at Mariner’s Harbor, New York, and upon commissioning of that destroyer on July 25, 1942 assumed command. He was awarded a Letter of Commendation with Ribbon by the Secretary of the Navy, as follows:

“For outstanding performance of duty as Commanding Officer of the USS Murphy during the amphibious assault on the Island of Sicily from July 10-12, 1943. Skillfully maneuvering his ship through dangerous waters, Lieutenant Commander Bailey carried out daring anti-submarine patrols and anti-aircraft defense of the transport anchorage off Gela, Sicily. As a result of his extremely effective operations, all shipping under his protection was able to disembark assault troops and discharge cargo with speed and efficiency. His courageous leadership in the face of grave danger and his untiring efforts contributed materially to the success of the invasion forces and were in keeping with the highest traditions of the United States Naval Service.”

He remained in command of the Murphy until February 1944.After brief temporary duty at Headquarters, Third Naval District, New York, New York he was in charge of fitting out USS Harry E. Hubbard, and assumed command of that destroyer upon her commissioning in July 1944. In January 1945, he was transferred to USS Vicennes, and served as her Executive Officer from March 1945 to January 1946.

In March 1946, he reported for shore duty in the Officer of the Ordnance Superintendent, New York Naval Shipyard. The following September he was transferred to the Navy Department, Washington, DC, for duty in the Officer of Budget and Reports, and served there until relieved of all active duty in May 1948, pending his retirement by reason of disability incurred in time of war, on January 1, 1949.

Admiral Bailey died in Jamestown, Rhode Island, on January 5, 1959, and was buried with full military honors, at Arlington National Cemetery, on January 9, preceded by services at the Fort Myer Chapel.