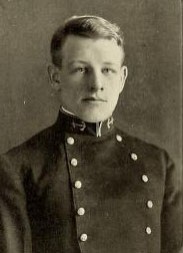 After graduation in June 1912, he was assigned for a year to the USS Colorado, an armored cruiser of the Pacific Fleet, then served successively in the USS Pittsburgh and USS South Dakota, also armored cruisers of the Pacific Fleet, the USS Buffalo, a transport operating from Pacific Station, and the USS Denver, a Pacific Fleet cruiser. Detached from that latter in October 1916, he was ordered to the Naval Station, Pensacola, Florida, for flight training, and in March 1918, during World War I, was transferred to the Naval Air Station, Rockaway, Long Island, New York.

Following Armistice, November 11, 1918, he served in the Office of the Chief of Naval Operations, Navy Department, Washington, DC, and in March 1919, was ordered to the Naval Air Station, Cape May, New Jersey, where a month later he joined the Navy dirigible, C-5. In June of the same year he was ordered to London, England, for duty at the US Naval Headquarters, and served in the Aviation Section until May 1920, when he was transferred to the Office of the Staff Representative, London. In August 1920 he was again transferred, this time for duty in connection with the R-38 (ZR-2) then building in Howden, England, and attached to the Naval Airship Detachment (US) of the Royal Air Force Airship Force Base, Howden, Yorkshire, England.

He was killed while serving on board the ZR-2, when that dirigible crashed on a trail flight near Hull, England, on August 24, 1921, before she was taken over from the British Government by the United States Navy.

Lieutenant Commander Coil had the World War I Victory Medal.