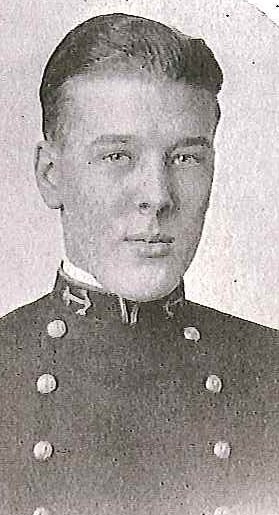 After graduation from the Naval Academy he was assigned to USS Mississippi, reporting to that battleship on July 5, 1910, and serving on board as a Passed Midshipman until April 11, 1912, and as Ensign from that date until detached on August 18, 1912. He then served as a junior officer on board another battleship, USS Delaware, until June 1914, when he was ordered to the Works of Wm. Cramp and Sons Co., Philadelphia, Pennsylvania, to assist in fitting out USS Nicholson. He served on board that destroyer from her commissioning, June 26, 1914, until August 4 of that year.

He had brief duty on board the battleship Tennessee, and from November 25, 1914, until June 30, 1915, served in USS North Carolina, a battleship of the Atlantic Fleet. He assisted in fitting out USS Ericsson, and from that destroyer’s date of commissioning, August 14, 1915, until June 24, 1916, he served on board. He had postgraduate instruction in Engineering at the Naval Academy, during the next eight months, on March 26, 1917, just before the outbreak of the First World war on April 6, he joined USS Trippe. After more than a year in that destroyer, which operated in the War Zone from June 1, 1917, throughout the war period, he returned to the United States, and home to await orders.

On May 31, 1918, he reported to Philadelphia, Pennsylvania, where USS Dent was building, and served as her Executive Officer from her commissioning, September 9, 1918, until January 6, 1919, after the Armistice. He next reported to the Navy Yard, Boston, Massachusetts, for duty in the Machinery Division, and on August 16, the same year, was ordered to the Navy Department, Washington, DC, for duty with the Board of Inspection and Survey under the Chief of Naval Operations.

Detached from the Navy Department (Board of Inspection and Survey) in March 1920, he was ordered to the Receiving Ship at New York, NY, pending transportation to London, England. Upon arrival there he reported to the Commander Naval Forces Operating in European Waters, for duty in connection with the Navy Dirigible R-38, as Engineer Officer on board when commissioned. Reporting on April 20, to Howden, England, he joined the dirigible R-38, and on August 24, 1921, he died as the result of an accident to Dirigible ZR-2, near Hull, England. (R-38 was the same as ZR-2, which was never taken over from the British Government, being wrecked on its trial flight.)

Lieutenant Commander Bieg had been designated Student Naval Aviator, and was at the time of his death one of 49 members of the Crew of the ZR-2. All except five were killed in the ill-fated accident, on her third trial flight.

He had the Victory Medal, with Destroyer Clasp (USS Trippe), for World War I.