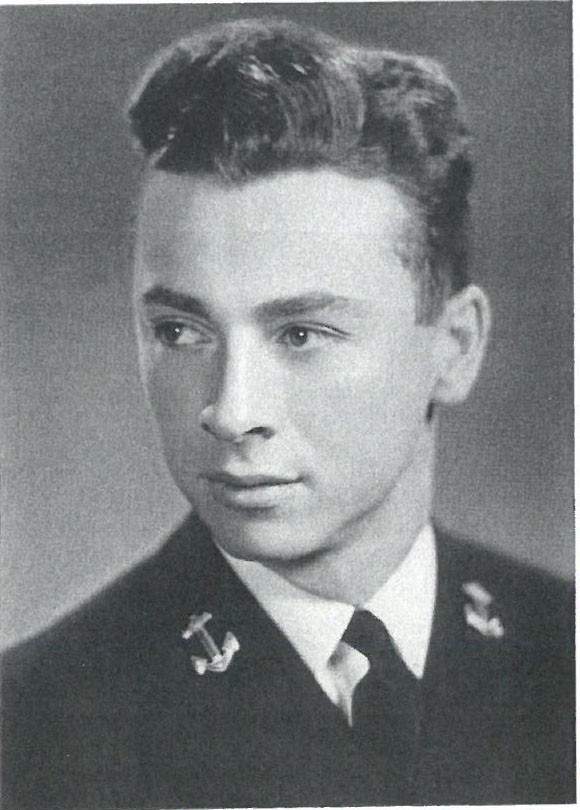 Malcolm Winfield Cagle was born in Grand Junction, Colorado, on September 26, 1918, son of Victor M. and Anna Leola (Cross) Cagle, both now deceased. He attended Knoxville (Tennessee) High School, and entered the US Naval Academy, Annapolis, Maryland, on Congressional appointment from Tennessee on June 11, 1937. As a Midshipman he participated in athletics (basketball, tennis and gymnastics) and was News Editor of the “Log.” Graduated and commissioned Ensign on February 7, 1941, he progressed in rank to that of Vice Admiral, to date from July 22,1971.

After graduation from the Naval Academy in February 1941, he reported to the USS Overton, in which he served in communications and gunnery until January 1943. During the early period of World War II, the Overton was assigned to escort of convoy duty in the North Atlantic, and later operated in the Gulf of Mexico and the Caribbean, rescuing the entire crew of the Coast Guard cutter Acacia after an attack by submarine, and taking them to San Juan, Puerto Rico.

From January to August 1943 he was a Student Naval Aviator at the Naval Air Station, Pensacola, Florida, and, designated Naval Aviator (HTA) on August 15, 1943, was ordered as Assistant Flight Instructor, Melbourne, Florida. In June 1944 he was detached for duty with Fighting Squadron Eighty-eight, based on the USS Yorktown, first as Executive Officer, and from June to October 1945 as Commanding Officer.

He was awarded the Navy Cross “for extraordinary heroism…in action against enemy Japanese forces in Kure Harbor, Honshu, Japan, July 24, 1945…” He also received the Distinguished Flying “for heroism and extraordinary achievement…against enemy forces over the Japanese Homeland, July 14, 1945…” and the Air Medal “for meritorious achievement…from July 10 to August 13, 1945…” In addition, he is entitled to the Ribbon for, and a facsimile of the Presidential Unit Citation awarded the USS Yorktown.

Returning to the United States in October 1945, he served until June 1946 as Flag Secretary on the Staff of Commander Fleet Air, Alameda, at Headquarters in Alameda, California, then had two years of similar duty on the Staff of Commander Air Force, Atlantic. In June 1948 he assumed command of Fighting Squadron Sixty-three based on the new carrier, USS Franklin D. Roosevelt and when detached in January 1950, he reported to the Navy Department, Washington, DC, for duty as Assistant to the Special Assistant to the Chief of Naval Operations (OP-004). During that tour of duty he had three months’ temporary additional duty in the West Pacific during Korean hostilities on the Staff of Commander Naval Forces, Far East.

As Carrier Operations and Special Weapons Officer on the Staff of the Commander in Chief Naval Forces, Eastern Atlantic and Mediterranean, he was again aboard during the period January 1952 until June 1954. He then returned to the Navy Department to serve sixteen months as Special Assistant to the Secretary of the Navy, and from October 1955 until July 1957 as Administrative Aside to the Secretary. He was a student at the National War College, Washington, DC, for the 1957-1958 school year, and in June 1958 he reported as Operations Officer on board the USS Intrepid. He became Executive Officer of that attack aircraft carrier in March 1959.

Detached from the Intrepid in August 1959, he next served as NATO Representative of Commander Second Fleet, Paris, France and in July 1961 returned to the United States for duty as Deputy Director of the Institute of Naval Studies, Cambridge, Massachusetts. He remained there until June 1963 and in September of that year assumed command of the USS Suribachi (AE 21). In July 1964 he became Commanding Officer of the USS Franklin D. Roosevelt (CVA-42), and in October 1965 was assigned to the Office of the Vice Chief of Naval Operations, Navy Department. In December that year, he transferred to the Office of the Duty Chief of Naval Operations (Air), where he served as Director of the Aviation Programs Division. “For exceptionally meritorious service from December 1965 to May 1968…’ in that capacity, he was awarded the Legion of Merit.

In June 1968 he assumed command of Carrier Division One. During this period, Vice Admiral Cagle made two deployments to combat operations in the Western Pacific. On April 16, 1969, he was designated as Commander Task Force Seventy-one, following the North Korean shootdown on the Navy EC121. This force of twenty-nine ships, including four carriers and three cruisers, was the largest combat naval force assembled since World War II. He was awarded the Distinguished Service Medal for planning, coordinating, and executing sustained combat airstrike operations against enemy aggressor forces in the Republic of Vietnam… In addition, as Commander Task Force Seventy-one, from April 20 to May 12,1969, Rear Admiral Cagle displayed a thorough knowledge of tactical and strategic concepts in developing a number of retaliatory strike options and plans for the protection of reconnaissance flights in the Sea of Japan..."

Vice Admiral Cagle has done much writing, including books, essays and filmed Television Scripts. In collaboration with Captain Walter Karig, USNR, now deceased, he wrote “Battle Report,” Volume VI. In collaboration with Captain Frank A. Manson, USN (Ret.), he wrote “The Sea War in Korea.” He is the author of “Naval Aviation Guide.” He was the 1957 winner of the U. S. Naval Institute Prize Essay Award and the 157 Navy League winner of the Alfred Thayer Mahan Award. He is the author of “The Butchers of Kapstan,” a story of a classmate’s adventure in the Korean war, which appeared on the Television Program “Navy Log,” in January 1958, and other stories shown on the same program. His latest books are “Flying ships: Hovorcraft and Hydrofoils” and “A Pilot’s Meteorology.”