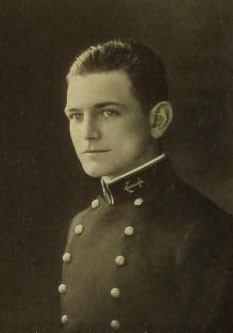 Marion Young Cohen was born in Birmingham, Alabama, on April 11, 1892, son of Mr. and Mrs. J.O. Cohen. He entered the US Naval Academy, Annapolis, Maryland, on appointment as Midshipman from New Jersey on August 17, 1910, and was graduated and commissioned Ensign in the U.S. Navy on June 6, 1914. He subsequently advanced to the rank of Captain on August 31, 1941, and upon his transfer to the Retired List of the Navy was promoted to the rank of Rear Admiral on the basis of distinguished service in combat. He died at his home in Philadelphia, Pennsylvania, on February 12, 1955.

After graduation from the Naval Academy in 1914, he had sea duty until December 1915, serving first in the USS Utah, a battleship operating in the Mexican area, and later in the cruiser, USS Brooklyn. He was next assigned to the First Submarine Division, with instruction on board the USS Mohican, and later, after qualifying for command of submarine, again joined the Brooklyn, then in Asiatic waters. He served on board that cruiser during the period November 1916 to August 1918, covering most of World War I period of hostilities.

He commanded the USS 0-11, of Submarine Division One, based at Vladivostok, Russia, from July 1919 until May 1920, after serving on board that submarine for eight months as Executive Officer and Navigator. For fifteen months thereafter he commanded the USS R-21, with additional duty as Commanding Officer, successively, of the USS 0-11 and the USS 0-12, also units of Submarine Division One. He returned to the Naval Academy in March 1922, and there had duty until June 1924 as an instructor in the Department of Seamanship.

He was next ordered to the Navy Department, Washington, DC, and after five months service in the Bureau of Navigation, reported as Aide on the Staff of Commander Train Squadron One, Fleet Base Force. While serving in that capacity from November 1924 until August 1927, he had additional duty with the Fleet Camera Party, on board the USS Antares. When detached he reported to Headquarters, Fifth Naval District, Norfolk, Virginia, for tour of duty at the Naval Training Station, Naval Operating.

In rank of Lieutenant Commander, Rear Admiral Cohen commanded the USS S-13 from July 1929 until June 1932, after which he reported to Headquarters, Fourth Naval District, Philadelphia, Pennsylvania, where he later assisted in fitting out the USS Minneapolis. He went aboard that cruiser at her commission on May 19, 1934, and served first as her Navigator, later as First Lieutenant and Damage Control Officer, until June 1936. A month later he returned to the Bureau of Navigation, Navy Department, where he completed a tour of duty in May 1939.

Detached from the Navy Department, he joined the USS Astoria, a unit of Cruiser Division 6, Scouting Force, and served as her Executive Officer until February 1940. For the next ten months he served as Commander Destroyer Division 70, with additional duty as Commanding Officer of the USS Crane. In December 1940 he assumed command of Destroyer 30, and during an extended period in this command contacted many enemy submarines. He was awarded the Legion of Merit, with combat Distinguishing Device, and cited as follows:

“For exceptionally meritorious conduct in the performance of outstanding services to the Government of the United States as Commander of Escort Units with the North Atlantic Trade Convoys during the period September 16, 1941, to March 10, 1942. By the skillful conduct of his convoy but, on November 1, 1941, while in command of a Task Unit launched an effective attack on an enemy submarine…”

Detached from command of Destroyer Squadron 30, he moved from the North Atlantic to the Caribbean area to serve on the Staff of Commander Caribbean Sea Frontier. He reported in August 1944 to Commander Amphibious Training Force, Pacific Fleet, as a prospective Transport Division Commander. A month later he was assigned duty with Commander Hawaiian Sea Frontier, as Commander Sea Forces, with additional duty as Commanding Officer, Section Base. That duty continued until the cessation of hostilities in August 1945, after which, for three months, he served as Commander Transport Division 72. From January to July 1946 he commanded the New York Group of the Sixteen Fleet, and when detached was relieved of all active duty pending his retirement on November 1, 1946.