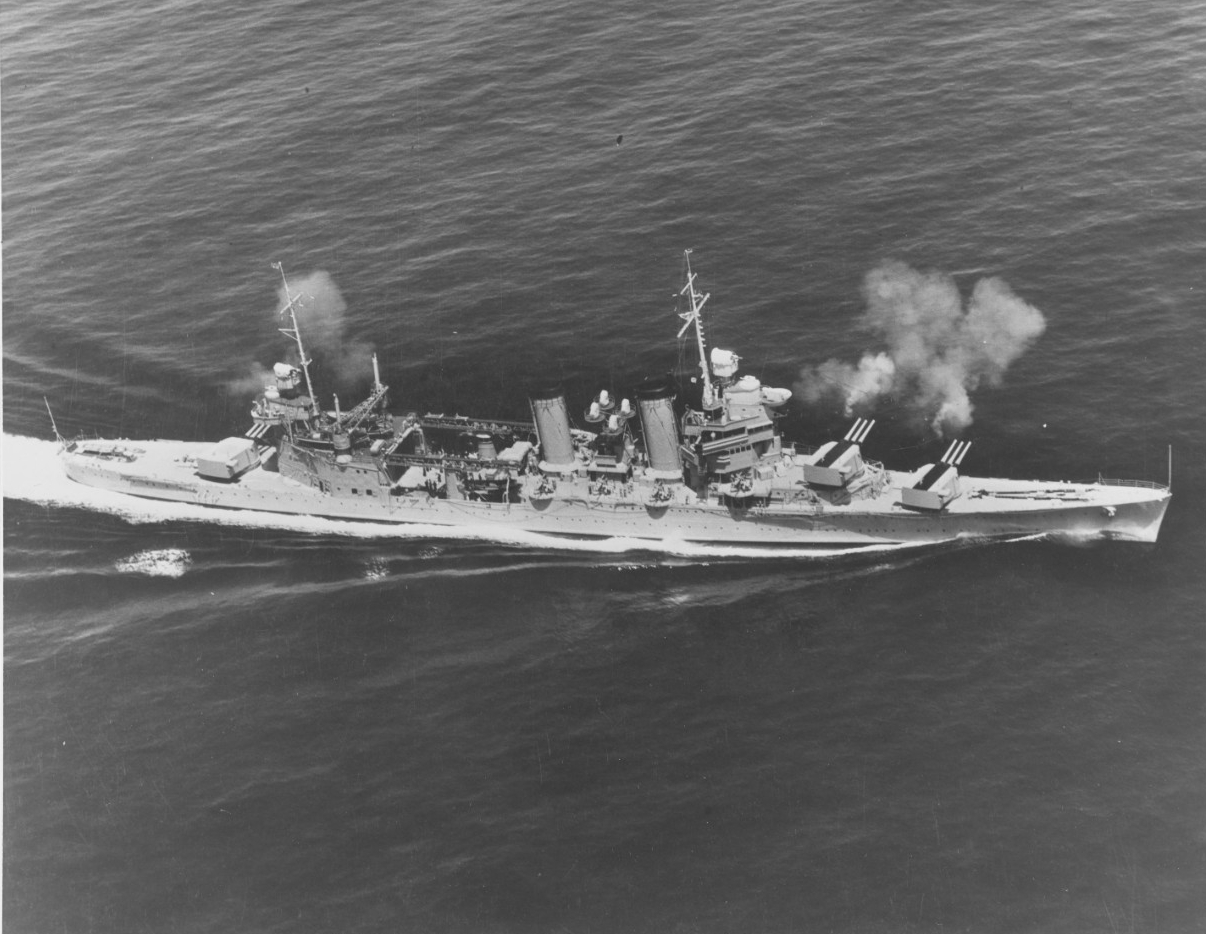 Minneapolis (CA-36) firing her 8/55 main battery guns during battle practice, 29 March 1939. Taken from a floatplane of her embarked aviation unit, VCS-6. Note the stripes painted on the tops of her forward gun turrets. Photograph from Department of the Navy collections in the U.S. National Archives. Catalog#: 80-CF-21343-2

A city in southeast Minnesota.

After shakedown in European waters during July to September 1934 and alterations in Philadelphia Navy Yard, the new heavy cruiser departed 4 April 1935 for the Panama Canal and San Diego, arriving 18 April to join Cruiser Division 7, Scouting Force. She operated along the west coast, aside from a cruise to the Caribbean early in 1939, until arriving at Pearl Harbor in 1940.

When Japan attacked her base 7 December 1941, Minneapolis was at sea for gunnery practice about 20 miles from Pearl Harbor. She immediately took up patrol until late January 1942 when she joined a carrier task force about to raid the Gilberts and Marshalls. While screening Lexington 1 February, she helped turn back an air attack in which three Japanese "Bettys" were splashed. She screened the carriers during their successful raids 20 February and again 10 March, when they blasted Japanese shipping at Lae and Salamaua, disrupting enemy supply lines to those garrisons.

Minneapolis took part in the Battle of the Coral Sea 4 to 8 May, screening Lexington through the great air engagement and shooting down three Japanese bombers. She rescued survivors when Lexington was lost, part of the price for preserving the vital lines of communication to Australia and New Zealand and stopping further Japanese expansion southward.

The cruiser was also engaged in the second key battle of the early phase of the Pacific war, the Battle of Midway 3 to 6 June, again protecting the carriers as their aviators dealt a deadly blow to Japanese naval aviation, sinking four enemy carriers and downing 250 planes with their trained pilots. This victory was not only critical in preserving the American position in the central Pacific, but meant the beginning of the end for Japanese sea/air power, so decisive in modern naval warfare.

After replenishing and repairing at Pearl Harbor, Minneapolis sailed to protect the carriers as they covered the landings on Guadalcanal and Tulagi 7 to 9 August. Remaining with the flattops, she went to the aid of Saratoga 30 August, when the carrier took a torpedo hit, and towed her from the danger area. Through September and October, she supported landings west of Lunga Point and on Funafuti.

As flagship of TF 67, she sortied 29 November to intercept a Japanese force attempting to reinforce Guadalcanal. At 2305 the next night she spotted six Japanese ships, and the Battle of Tassafaronga was opened by her 8‑inch fire. Within 2 minutes, she had sunk an enemy transport; and her second group of four salvos, with those of another cruiser, sank a second enemy ship. Now a second group of Japanese warships, which had been giving distant cover to the transport group, entered the action, and Minneapolis took two torpedo hits, one on the port bow, the other in her number two fireroom, causing loss of power and severe damage; her bow was gone back to the chain pipes, her port side badly ruptured, and two firerooms open to the sea. Magnificent damage control work and skillful seamanship kept her afloat and enabled her to reach Tulagi. There, camouflaged with palm fronds and shrubs to protect her from frequent air raids, she was temporarily repaired by her own crew with the help of a Seabee unit stationed on the island, and was able to sail for extensive repairs at Mare Island. 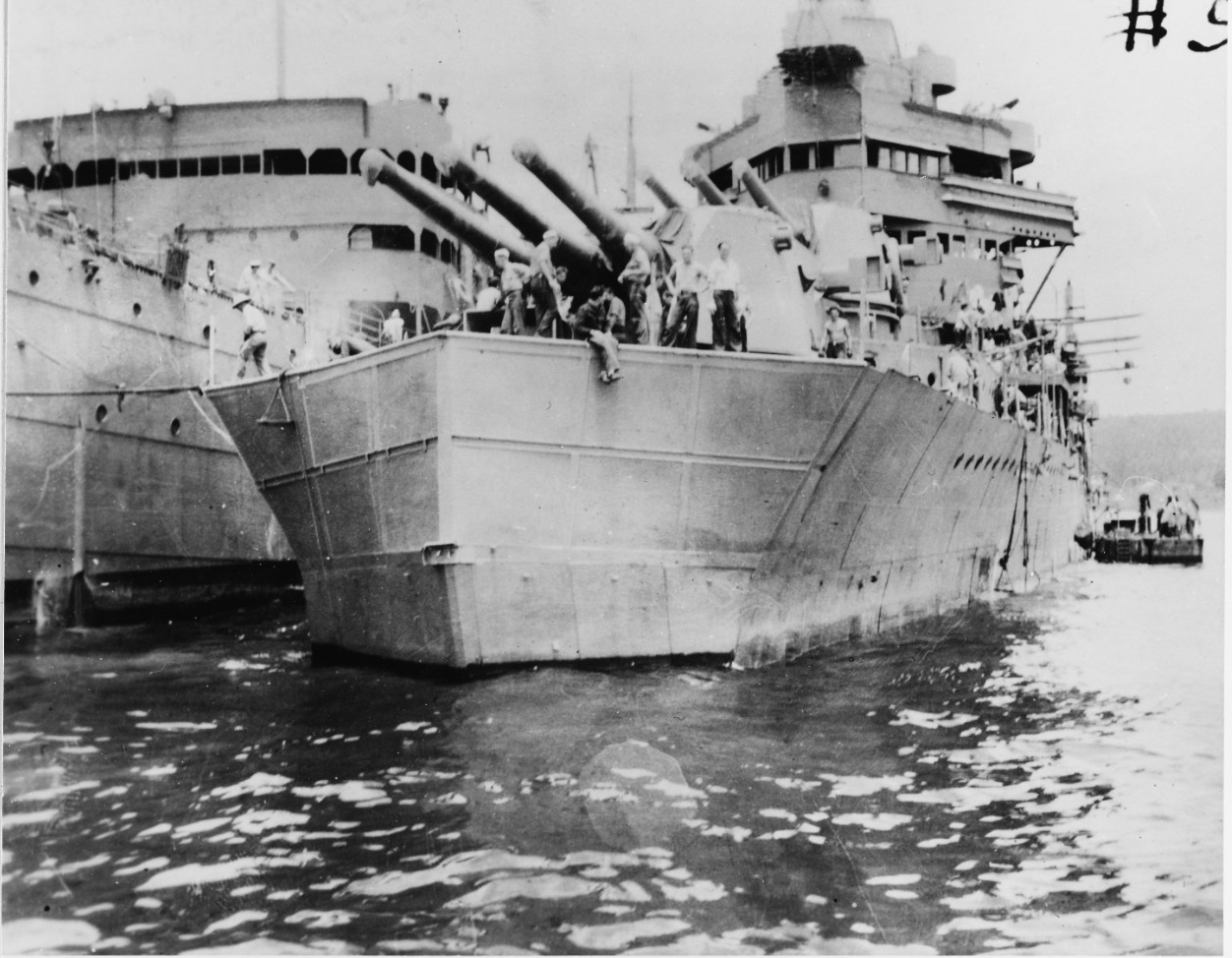 Minneapolis (CA-36) At Espiritu Santo, New Hebrides, in January 1943, after being fitted with a short temporary bow for the voyage back to the United States for permanent repairs. Minneapolis had been torpedoed by Japanese destroyers during the Battle of Tassafaronga, off Guadalcanal on 30 November 1942. Collection of Vice Admiral Homer N. Wallin, USN (Retired). U.S. Naval History and Heritage Command photograph. Catalog#: NH 46013

By August 1943, Minneapolis was back in the Pacific for 20 months of frontline duty which would include every major Pacific operation save Iwo Jima. Her first was the bombardment of Wake 5 October, then 20 November to 4 December, she joined in the assault and capture of Makin in the Gilberts. In December she screened a carrier group in the preinvasion strikes against Kwajalein and Majuro, serving on in the capture of the Marshalls into mid‑February 1944. With the carriers blasting the Marianas and the Carolines, Minneapolis continued to guard them through raids on the Palaus, Truk, Satawan, Ponape, and other key Japanese bases into April. The latter raids were coordinated with the landings at Hollandia, New Guinea.

In May, Minneapolis prepared at Majuro for the assaults in the Marianas, firing on Saipan in preinvasion bombardment 14 June. As word came that a large Japanese force was sailing to attempt a disruption of the operation, Minneapolis rejoined TF 58 to screen the carriers during the Battle of the Philippine Sea, 19 and 20 June. As American aviators won another great victory, Minneapolis screened the carriers and provided antiaircraft fire. After taking a bomb miss close aboard, her crew again patched her up.

From 8 July to 9 August, Minneapolis brought her heavy guns to the support of the Marines winning Guam back from the enemy. Firing deep support, night harrasing, and call fire, she won grateful praise from Gen. A. H. Turnage, commanding the 3d Marine Division: "...a prime factor in the success of this operation...a job well done." From 6 September to 14 October, she gave similar essential aid to the capture of the Palaus, her operations at the close of that period preparing directly for the assault on Leyte. In the preinvasion bombardment force, she entered Leyte Gulf 17 October, and she downed five enemy planes during the initial resistance to the assault.

As the Japanese launched the three‑pronged naval attack which would develop into the Battle for Leyte Gulf, Minneapolis was assigned 24 October to Adm. Jesse B. Oldendorf's bombardment group with other cruisers and older battleships. With them she deployed across Surigao Strait that night, alert to any sign of contact with the enemy by the plucky PT‑boats and destroyers fanned out ahead. As the Japanese ships steamed in column, they ignored the flank attacks of the smaller ships heading straight for Oldendorf's battleline, which opened fire with an enormous coordinated salvo, immediately sinking the first of the two Japanese battleships they would conquer that night. Three destroyers were also sunk, and a heavy cruiser so badly damaged that aircraft could pick it off the next day. Admiral Oldendorf in this Battle of Surigao Strait had performed the classic maneuver of crossing the T, meeting the individual fire of the enemy with his own massed fire, and had won a victory as great as his brother admirals in the other three phases of this battle.

Continuing to alternate carrier screening and bombardment duties in the Philippines, Minneapolis was on the scene for the attack and landings at Lingayen Gulf, Luzon, 4 to 18 January 1945 and the landings on Bataan and Corregidor 13 to 18 February. During March she prepared for the assault on Okinawa, off which she arrived for preinvasion bombardment on the 25th. She fired at once on Kerama Rhetto, seized first in a brilliant move to provide a safe haven for ships during the assault on Okinawa proper. When the main invasion began 1 April, Minneapolis bombarded the Japanese airfield at Naha, rendering it useless to the enemy, then began call fire as ground forces pinpointed her targets by radio.

After months of such action, her gun barrels were worn so badly as to need replacement, and she prepared to sail 12 April. Her departure was delayed that day by the largest air attack yet of the Okinawa operation, during which she splashed four would‑be kamikazes and watched three others crash harmlessly into the sea. At nightfall she sailed for Bremerton, Wash., where she repaired and replaced the linings of her gun barrels. Headed back for more action, she was in Subic Bay, Philippines, at the end of hostilities.

She flew the flag of Adm. Thomas Kincaid as he accepted the Japanese surrender of Korea 9 September, then patrolled the Yellow Sea, covering the landing of Marines at Taku and Chinwangtao, China. After carrying homeward bound veterans to the west coast, she sailed 14 January 1946 for the Panama Canal and Philadelphia. Here she was placed in commission, in reserve, 21 May 1946, and out of commission 10 February 1947. She was sold for scrapping 14 August 1959 to Union Metals and Alloys Corp. 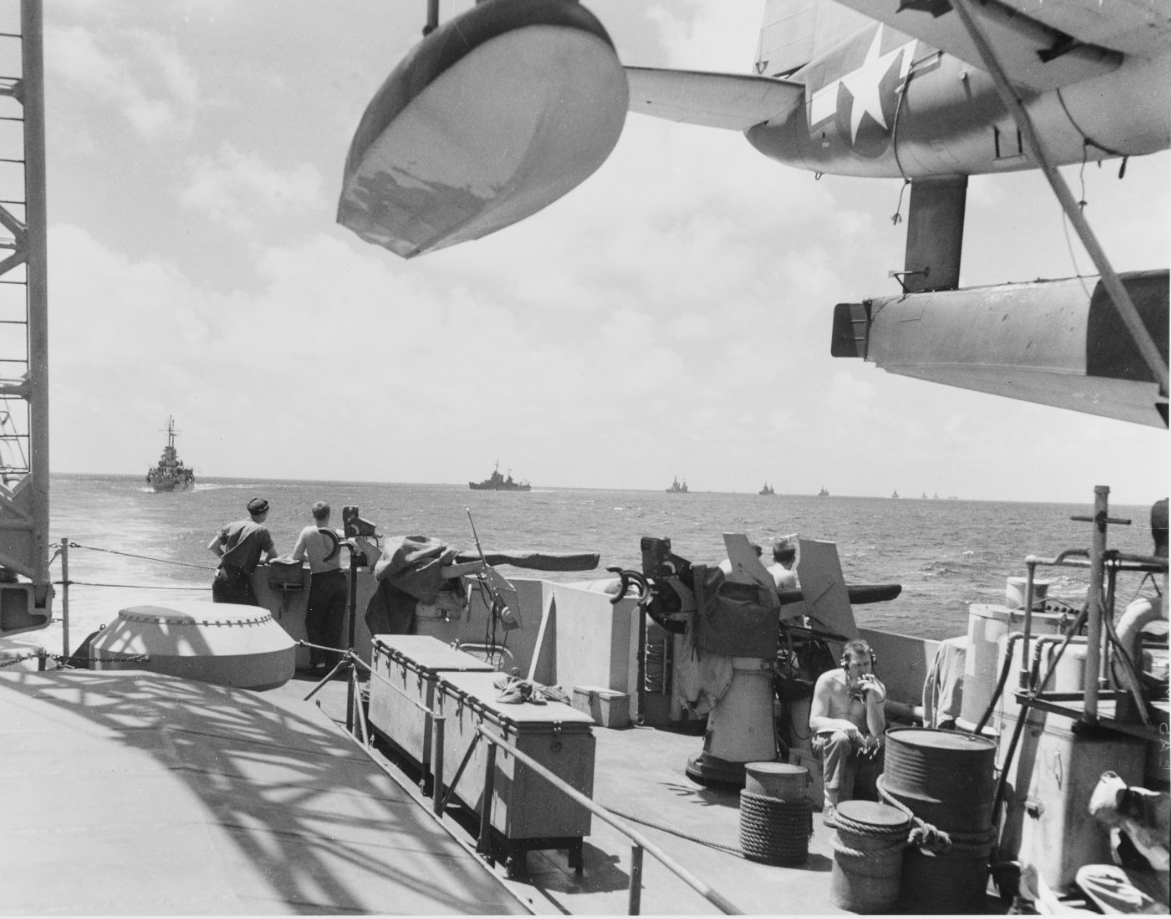