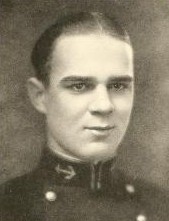 Forrest Close was born in Waynesboro, Georgia, on January 4, 1904, son of Mrs. Mary Louise (McElmurrary) Close and the late Nathaniel Bedford Forrest Close, of Savannah, Georgia. He was graduated from Savannah (Georgia) High School and was appointed to the US Naval Academy, Annapolis, Maryland, from his native state in 1920. Graduated and commissioned Ensign on June 5, 1924, he subsequently attained the rank of Captain to date from June 1, 1943.

Upon graduation from the Naval Academy in June 1924, he was assigned to the USS West Virginia, and after two years’ service as a junior officer in that battleship, was transferred to the USS Marblehead. During his four year period of duty as Watch and Division Officer aboard the latter, that lighter cruiser was assigned variously to the Atlantic, Pacific, and Asiatic Fleet, and to Special Service Squadron, and participated in the Second Nicaraguan and Yangtze Valley Campaign.

He returned to Annapolis in 1930 for instruction in Communications Engineering at the Naval Postgraduate School, and, continuing the course at Harvard University Graduate School, received the degree of Master of Science on June 1932. For a year thereafter, he served As Communication Officer of the USS Louisville, a unit of Cruiser Division 5, Scouting Force, and during a second year (1933-34), he was Radio Officer on the staff of Commander, Battleship Division One. In 1934-35 he served as Aide and Flag Lieutenant to Commander Battleship, Battle Force, attached to the USS West Virginia, flagship.

In the summer of 1935 he was ordered to the Navy Department, Washington, DC, where he served for three years in the Office of the Judge Advocate General of the Navy. While so assigned, he studied Law, his specialty Patent Law, at George Washington University, from which he received the degree of Bachelor of Laws in 1938. He was admitted to the Bar, US District Court for the District of Columbia, the same year.

On December 4, 1941, he assumed command of the USS Hambleton. In 1942 he commanded a group of destroyers on cruise to the West and East Coasts of South American. Under his command, the Hambleton engaged in anti-submarine operations on the Atlantic Coast, and in the Caribbean, escort of convoys to England and northern convoy operations with the British Fleet. The Hambleton, participating in the North African Campaign in November 1942, received torpedo hits causing extensive personnel casualties and structural damage, but after being repaired at Casablanca, was returned to service.

He attended the command course at the Naval War College, Newport, Rhode Island, in 1943, and remained there for a second school year as a lecturer and instructor in tactics on the staff. In 1944-45 he served as Chief of Staff and Aide to Commander Service Squadron, South Pacific, staging Army and Navy forces for the Iwo Jima and Okinawa Campaigns. “For exceptionally meritorious conduct… as Chief of Staff to the Commander Service Squadron, South Pacific Force, during operations against enemy Japanese forces from January to September 1945…” he was awarded the Legion of Merit, the citation continues:

“Demonstrating professional ability and sound judgment, Caption Close directed numerous and complex staff functions and, by is precise planning, rendered invaluable assistance to the command in the support of major forces staging for amphibious operations and in the redeployment of forces and equipment in the South Pacific to forward areas…”

Under orders of October 15, 1947 he assumed command of the USS Prairie, flagship of Commander Service Squadron 3, at Tsingtao, China, and returned her to American waters when she was relieved by the USS Piedmont on March 4, 1948. Detached from the Prairie in October of that year in the Office of the Chief of Naval Operations. On March 28, 1950 he was ordered to duty as Commander, Destroyer Squadron 8.