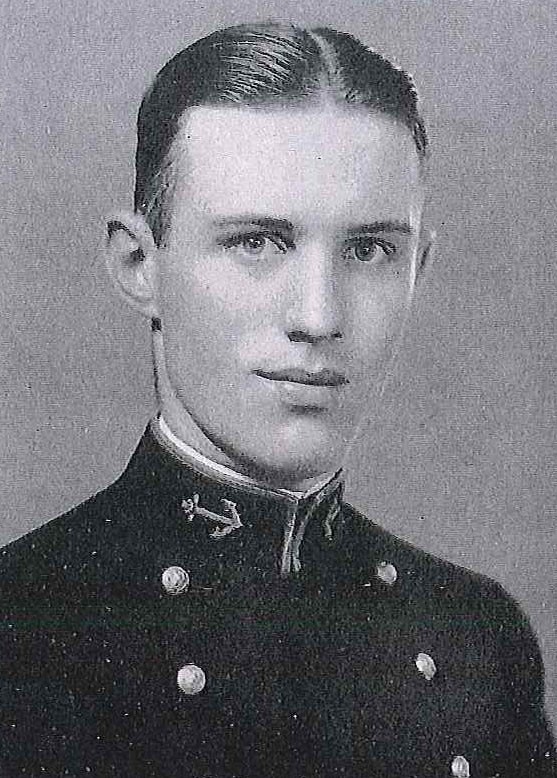 Paul Foley, Jr. was born in Annapolis, Maryland, on September 12, 1908, son of Mrs. (Josephine Frances Drake) Foley and the late Captain Paul Foley, USN (Retired). He attended Irving School, Tarry-town-On-Hudson, New York, prior to his appointment to the US Naval Academy, Annapolis, Maryland, from the First District of South Carolina in 1925. As a Midshipman he was on the Plebe swimming team, was a member of the Trident Society and was Managing Editor of the “Log”. Graduated and commissioned Ensign on June 8, 1929, he subsequently advanced in rank, attaining that of Captain, to date from March 30, 1945.

Following graduation from the Naval Academy in 1929, he reported on board USS Saratoga and in September 1930 was detached for flight training at the Naval Air Station, Pensacola, Florida. Designated Naval Aviator on August 5, 1931, he next served with Fighting Squadron Six, attached to the USS Saratoga, and in May 1934 transferred to Patrol Squadron One, based at Pearl Harbor. Territory of Hawaii. From June 1937 until May 1940 he served with Cruiser-Scouting Squadron Four, operating from USS Houston and later USS Northampton. While on board the Houston he participated in the Presidential Cruises in 1938 and 1939 to Clipperton, Galapagos, Cocos, Old Providence Island, Silver Cay, Guadalupe, St. Kitts, Nevis, Virgin Islands, and also in 1939 the Secretary of Navy’s cruise to the Bahamas.

In May 1942 Patrol Squadron Forty-One, under his command, shifted its base to Dutch Harbor, Alaska, in anticipation of Japanese attacks on Dutch Harbor. He assumed further duty as Advance Staff Operations Officer of Patrol Wing Four for all operations west of Cold Bay. He conducted war patrols with PBY-5s and PBY-5As of Patrol Wing Four (later Fleet Air Wing Four) in the Alaska Sector, and in June 1942 was present during the Japanese attacks on Dutch Harbor. He led his squadron in support of shore bombardment, by Task Force Eight, of Japanese installations at Kiska Island, and subsequently based at Cold Bay, Alaska, he conducted antisubmarine patrols as far west as Attu.

He was relieved of his secondary duty in September 1942 and in November assumed additional service as Senior Patrol Wing Four Aviator at Adak to coordinate antisubmarine and anti-shipping patrols from that base and participated in the preliminary survey operations of Amchitka. He was detached from command of Patrol Squadron Forty-One in December 1942 and ordered to return to the United States. For outstanding services in the Alaska area he was awarded the Bronze Star medal with Combat “V”, and the Legion of Merit. The citations follow in part:

Bronze Star Medal: “For meritorious achievement as Commander Patrol Squadron Forty-One and as Advance Staff Operations Officer of Commander Patrol Wing Four, during the Japanese aerial attack on Dutch Harbor, Alaska, June 3 and 4, 1942. . . (He) contributed materially to the success of the Navy Patrol plane scouting and bombing operations toward preventing the enemy from accomplishing the immediate objectives in this area. . .”

Legion of Merit:  “For exceptionally meritorious conduct . . . as Commander of a patrol plane squadron in action against enemy Japanese forces, and later as Fleet Air Wing Four advance Staff Operations Officer at Dutch Harbor, and as Senior Naval Aviator at Adak, during the Aleutian Island Campaign from June 15 to December 21, 1942. In addition to leading his squadron on two hazardous night formation flights in weather which required instrument flying, Lieutenant Commander Foley also directed the details of the complicated schedule of flights supporting the movements of surface forces with skill and daring. At Adak, despite the severe winter weather, inadequate basing and lack of facilities, he succeeded in carrying out scheduled operations. . .”

In January 1943 he was assigned to the Military Requirements Division, Bureau of Aeronautics, Navy Department, Washington, D C., and in July of that year became Deputy Director of that division. In that capacity he handled all Navy multi-engine aircraft, electronics, antisubmarine warfare and air-sea rescue activities. While there he was also a member of the Munitions Assignment Committee (Air), (Sub-Committee on Aircraft and Installations) and the Joint Chiefs of Staff Committee on Air-Sea Rescue.

He remained in the Bureau of Aeronautics until May 1945, when he joined the staff of Commander Air Support Control Units, Pacific at Pearl Harbor, T. H. In that assignment he travelled extensively in the Western Pacific in connection with air support activities. He was present at Okinawa in June 1945 and thence in the Philippines and Marianas. Later that month he became Commander Air Support Control Unit #4, engaged in planning Operation Olympic and in briefing Headquarters Sixth Army and officers of the Fortieth Infantry, First Calvary, Forty-Third Infantry and Headquarters IX Corps in Navy Air Support Tactics. He was controlling the air support (by North Pacific escort carriers) for the occupation of Aomori, Ominato, Hakodate and Otaru, Japan and the remainder of the Island of Hokkaido.

Between February and November 1946 he was Deputy Air Operations Officer for Operation Crossroads, Joint Task Force One. As such he participated in the Atomic Tests ABLE and BAKER at Bikini Atoll for which he received a Letter of Commendation, with authorization to wear the Commendation Ribbon, from the Secretary of Navy. The citation follows in part:

“For outstanding service as Deputy Staff Air Operations Office Officer, Joint Task Force One, during Operation Crossroads, from February 20 to August 15, 1946. Captain Foley trained a mixed staff in Navy procedures, advised the Air Operations Officer in Navy matters and actively directed the operation of the Combat Information Center in the test area on Rehearsal and Test Days. In developing an Air Plan understandable to Army and Navy air, surface personnel and scientific groups, he determined, screened, coordinated and translated the individual tasks for the Navy Air Task Units into a simple, workable plan of operation and, in addition, simultaneously developed the basic concept of, and prepared the Air Communication Plan. Following the completion of the atomic bomb tests, he planned the policies for the disposition of the Naval Air Task Units and remained aboard the Flagship as the Staff Air Representative when the remainder of the Staff was flown to Washington. By his initiative, professional knowledge and determined efforts, Captain Foley contributed materially to the success of Operation Crossroads. . .”

In October 1946 he joined the staff of Commander Second Task Fleet as Aviation Officer and in September 1947 returned to the Bureau of Aeronautics to serve as Deputy Director of the Maintenance Division. He remained there until July 1950, after which he attended the course in strategy and tactics at the Naval War College, Newport, Rhode Island. From January 1951 until May 1952 he had duty as Operations and Plans Officer on the staff of Commander Sixth Fleet, followed by instruction at the Damage Control School and the Fleet Sonar School. Key West. Florida.

He became Commanding Officer of USS Mindoro in June 1952, and in June 1953 was detached for duty on the staff at the Naval War College, Newport, Rhode Island, as Head Command and Staff Department. While at the College he was awarded a Certificate of Completion of the two-year course in Naval Warfare. On May 28, 1955 he assumed command of USS Bennington, his present assignment.