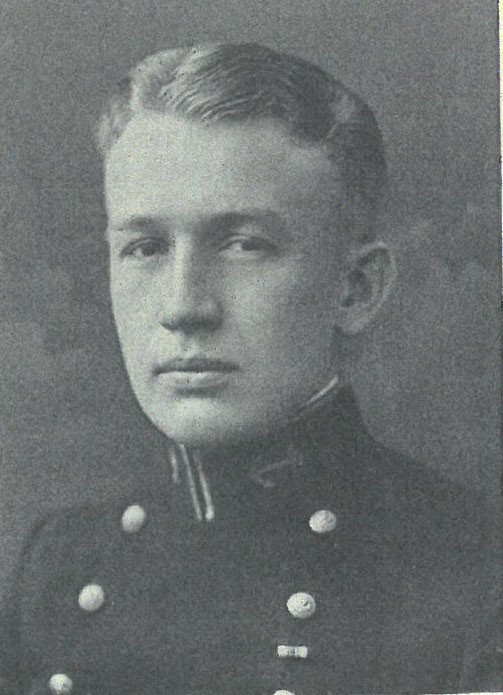 George William Campbell was born in Springfield, Illinois, on July 15, 1902, son of A.D. and Anna M. Campbell.  On May 29, 1918 while in his second year at SPringfield High School, he enlisted in the US Army as a Private in the Medical Corps.  Stationed at Camp Merritt, New Jersey, her remained there for fourteen months, and on July 18, 1919 was honorably discharged, returning to high school.  He was graduated in 1921 and, the next year received an appointment to the US Naval Academy, Annapolis, Maryland, from the Twenty-first District of his native state.  As a Midshipman, he was Manager of the football team.  Completing the four year course there, he was commissioned Ensign on June 3, 1926, and subsequently advanced in rank, attaining that of Captain, to date from August 1, 1943.

Following graduation in 1926, he reported aboard USS Arizona, and in March 1928 was detached for service on the staff of Commander Battleships, Battle Fleet.  Transferred in June 1929 to the staff of Commander Batte Fleet, he served until May 1930 as Assistant Flag Secretary and Assistant for Operations.  Ordered next to the Naval Air Station, Lakehurst, New Jersey, for flight training, he completed his instruction and was designated Naval Aviator (lighter-than-air) on June 6, 1931.  He remained at the Lakehurst Air Station until January 1932, when he  joined the airship Akron as Watch Officer and Assistant Material Officer.

Ordered to Akron, Ohio, in December 1932, he duty in connection with the fitting out of USS Macon, and was assigned to that airship as Watch Officer and Material Officer, from her commissioning, June 23, 1933 until she crashed off Point Sur, California, on February 12, 1935.  After the loss of the Macon, he was on duty at the Naval Air Station, Sunnyvale, Mountain View, California, for several months prior to reporting in June 1935 aboard  USS Wright.  Detached from that seaplane tender in June 1936, he then assumed command of USS Eagle #48, engaged in the training of Naval  Reserves in the Third Naval District, with additional duty as Instructor, Eighth Battalion, US Naval Reserve, Perth Amboy, New Jersey.

On June 10, 1938 he became Executive Officer of USS Zane, and in March 1939 was assigned to USS Arkansas as Assistant First Lieutenant and Damage Control Officer.  During March and April 1941 he was in command of USS Bainbridge, followed by duty as First Lieutenant and Damage Control Officer of USS Wyoming.  He was attached to the latter when the United States entered World War II, December 8, 1941 and continued duty in that battleship, operating as gunnery training ship for officers and men, until March 1943.

On March 15, 1943, he reported as Assistant to the Director of Public Relations (Communique and Security Officer), Navy Department, Washington, DC and on August 8, 1944 assumed duty as Deputy Director of  Public Relations (redesignated Office of Public Information on June 19, 1945).  "For outstanding services as a Public Information Officer, serving in the capacity of Assistant Director, and subsequently as Deputy Director from March 15, 1943 to August 31, 1945..." he received a Letter of Commendation with authorization to wear the Commendation Ribbon, from the Secretary of Navy.  The citation follows in part:

"Exercising sound judment, expert organization ability and a broad knowledge of Public Relations, Captain Campbell was responsible in large measure for the expeditious release of Naval News to the country's public media.  His close relationship with high government officials resulted in a more complete understanding of the problems involved and aided materially in the release of certain information which previously had been held for security reasons.  Unwavering in his devotion to duty, Captain Campbell contributed greatly to the cordial relations maintained between thr press and the Navy..."

He assumed command on October 6, 1945, of USS Ariel, auxiliary store ship operating in the Atlantic, commanding her until December of that year.  In January 1946 he became District Public Information Officer, Fourth Naval District, with headquarters in Philadelphia, Pennsylvania, and continued to serve in that capacity until June 1949, when he was assigned to the Office of the Chief of Naval Operations, Navy Department, Washington, DC.  In November 1949 he reported as District Public Information Officer, First Naval District, with headquarters in Boston, Massachusetts, for duty as War Plans Officer.

In September 1950 he joined the staff of Commander Naval Forces, Far East, as Public Information Officer, and for "meritorious achievement (in that capacity)...from October 9, 1950 to July 31, 1951..." he received a Letter of Commendation with authorization to wear a Bronze Star in lieu of a Second Commendation Ribbon, from Commander Naval Forces, Far East.  The citation continues in part:  "By his administrative ability, keen foresight and excellent dissemination of news of the Navy's part in the Korean hostilities, he aided materially in the successful accomplishment of the task of keeping the public and the Navy informed of Naval activities in the Far East.  His diplomatic coordination of interservice news coverage exhibited a high degree of skill and efficiency..."

Returning to the United States in July  1951,  he reported as Operations Officer on the staff of the Commandant First Naval District, Boston, Massachusetts.  He continued to serve in that capacity until July 1952, when he joined the staff of the Supreme Allied Commander, Europe, as Chief of Staff for Information.  In February 1954 he was ordered to duty as Assistant for Public Information (District Public Information Officer), Third Naval District, with headquarters in New York.

He is the author of many  places (fiction and non-fiction) which have appeared in popular magazines.