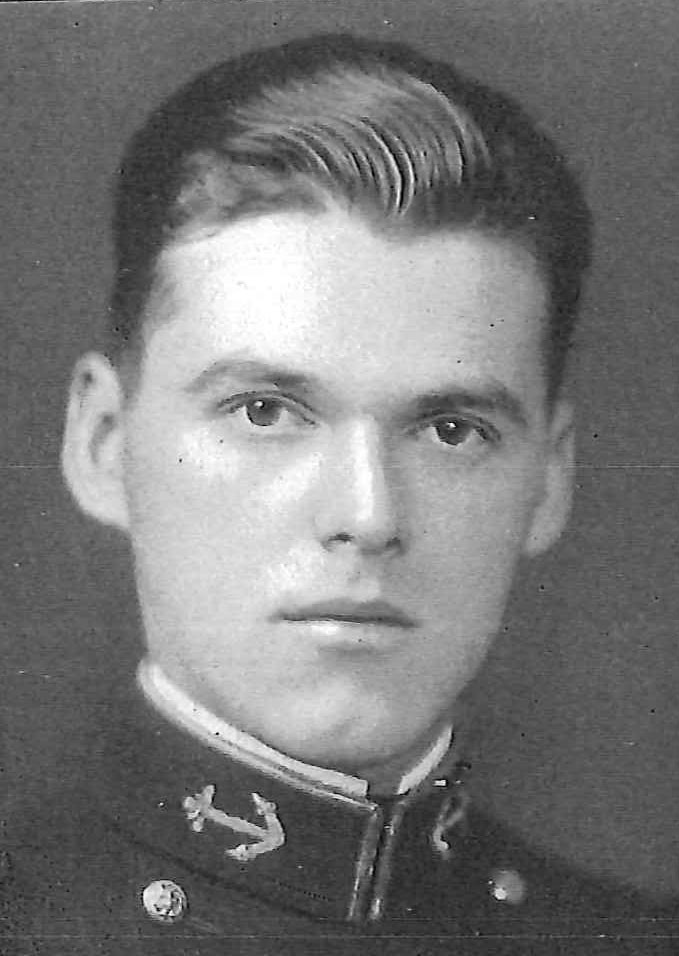 Albert Thomas Church, Jr., was born in Washington, DC, on December 15, 1917, son of the late Rear Admiral A.T. Church, USN, and Mrs. (Marion Gibson) Church of Annapolis, Maryland. He attended High Schools in Bremerton, Washington, and Annapolis, Maryland, and entered the US Naval Academy as a Midshipman from the First Congressional District of Washington, on August 7, 1934. He was graduated with the degree of Bachelor of Science on June 2, 1938, and commissioned Ensign in the U.S. Navy. Through subsequent advancement he attained the rank of Captain, to date from July 1, 1956.

After graduation from the Naval Academy in June 1938, he served for a year in USS West Virginia with duties of a junior officer in gunnery, navigation and communications. From June 1939 until March 1941 he was attached to the Engineering and Communication Departments of USS Helm, and in April 1941 was transferred to USS Washington, then building at the Navy Yard, Philadelphia, Pennsylvania. He had communications, gunnery and operations duties on board that battleship from her commissioning in July 1941 throughout the early period of World War II, until June 1943, participating in the capture and defense of Guadalcanal and the consolidation of the southern Solomons.

From July 1943 until September 1944 he served as Executive Office of USS Gatling (DD-671). As such, in that period, he participated in the Marshall Islands operations (occupation of Kwajalein and Majuro); attacks on Truk and the Marianas, Palau, Yap, Ulithi and Woleai raids, and raids on Truk, Satawan and Ponape; Hollandia operations; and the Marianas operation, including the capture and occupation of Saipan, the Battle of the Philippine Sea, the capture and occupation of Guam, and raids on Yap, Palau, Ulithi and he Bonis.

During the period October 1944, throughout the remaining months of the war, he was Commanding Officer of USS Herndon (DD-638), which after serving the European theater, then operated in the Far East (China waters). He remained in command of the Herndon, after the Japanese surrender, until May 1946, while she was assigned to occupation duty. Upon his return to the United States, he reported to the Naval War College, Newport, Rhode Island, where he was a student for a year, then served on the Staff until June 1949.

He assumed command of USS Warrington (DD-383) in July 1949. A year later, under his command, that destroyer visited Iceland for a five day operational visit with three other destroyer of Destroyer Division 22. Upon his detachment in December 1950, he was ordered to the Navy Department, Washington, DC, where he completed a tour of duty in the Office of the Chief of Naval Operations (Evaluation) in April 1954. From June of that year until November of the next, he was assigned to Amphibious Group 4, with duty in Gunnery, Training, Special Weapons Employment and Atomic Defense.

In December 1955 he reported to the Office of the Navy Comptroller, Navy Department, for general orientation, and in February 1956 became Naval Aide to the Assistant Secretary of the Navy (Financial Management). He continued as Naval Aide when Mr. William B. Franke moved up to the position of Under Secretary of the Navy, in April 1957. In July 1958 he joined the Staff of the Commander in Chief, US Pacific Fleet as Assistant Chief of Staff for Administration. In September 1960 he assumed command of USS Hassayampa (AO-45), and in September 1961, became Commanding Officer of USS St. Paul (CA-73). He served in the Joint Staff Office, Joint Chiefs of Staff, Washington, DC. From December 1962 until ordered detached in October 1964 for duty in the Office of the Chief Naval Operations, Washington, D.C.

Captain Church awarded a Letter of Commendation, with Ribbon, by the Commander Seventh Fleet, “For distinguished himself by excellent services as Officer in Charge of twelve surrendered Japanese naval and merchant vessels at Tsingtao, China, from 16 to 22 September 1945, and of six surrendered Japanese combatant vessels at Jinsen, Korea, from 24 to 27 September…” the citation continues “despite innumerable difficulties and localities of confused economic conditions… he successfully demilitarized, safeguarded, and prepared the surrendered combatant vessels for sea, exercised military control over the Tsingtao wharf, at which they were berthed, and transmitted the necessary directives to the local Japanese Naval Command…”