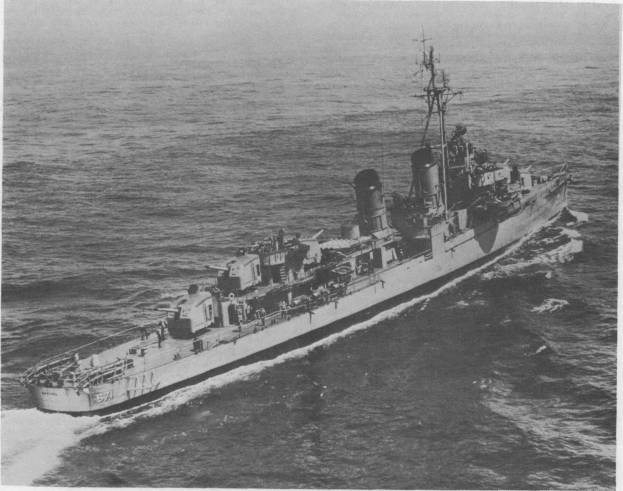 Caption: USS Gatling (DD-671) deployed and ready to fight while keeping the peace in the Mediterranean in 1959.

Richard Jordan Gatling, born in Hartford County, N.C., 12 September 1818, won fame as the inventor of machines to plant cotton, rice, and wheat; and hemp-breaker; a steam plow; and a screw propeller for steamboats. During the Civil War he designed a multibarrelled machine gun. He died in New York City 25 February 1903.

After shakedown out of Bermuda and alteration at New York early November, the new destroyer called at Norfolk, Va., to conduct training cruises for crews of destroyers still under construction.

On 19 November 1943 Gatling proceeded to Trinidad, British West Indies, to escort carrier Langley to Norfolk. Gatling stood out from Norfolk 3 December, escorting Intrepid through the Panama Canal to San Francisco, arriving 22 December. The next day she sailed for Pearl Harbor.

On 16 January 1944 Gatling sortied with Task Force 58 to support the forthcoming invasion of the Marshall Islands; thereafter, Gatling was continuously with the carrier task forces as they struck Japanese outposts and finally hit the heart of Japan itself.

In February the first carrier strikes against Truk occurred. Gatling provided fire support during the raid and screened the flattops during raids on the Marianas a few days later. In March she joined in the attack on Emirau Island and at the beginning of April in the air strikes against the Palau Archipelago. Steaming south to strike Hollandia, Wakde, Sawar, and Same, New Guinea, the task force supported Army landings at Aitape, Tanahmerah Bay, and Humboldt Bay from 21 to 26 April. During this action, Gatling stood radar picket duty and directed fighter planes. After new attacks on Truk late April 1944, Gatling supported the invasion and occupation of the Marianas from 10 June to 5 July. In the Battle of the Philippine Sea, 19 and 20 July, Gatling was credited with shooting down or aiding in the kills of six Japanese planes.

Late that month, carrier task forces again struck the Palaus and blasted Yap and Ulithi. In early August the Bonin Islands became targets1 for Gatling's, powerful guns, and in September the carriers she guarded repeatedly struck Japanese targets in the Philippines.

October saw attacks against Okinawa on the 10th and against Formosa, Luzon, and the Visayas from the llth to the 23d. On 24 October, after enemy bombs had sunk Princeton in the Battle of the Sibuyan Sea, Gatling rescued over 300 of the light carrier's survivors. For heroism in saving these men, 4 of Gatling's crew were awarded the Navy-Marine Corps Medal, and 16 others received the Bronze Star.

Gatling landed the survivors at Ulithi and rejoined carrier task groups for November and December strikes against the Philippines. After a powerful typhoon in which 3 destroyers capsized, Gatling searched for survivors and helped to save over 100 men from the sea.

At Christmas 1944, the destroyer returned to Ulithi. The task force sortied 29 December to strike Formosa and Luzon during January 1945. Hoping to locate and destroy a Japanese fleet in that area, Admiral Halsey took the task force into the South China Sea 10 January and hit targets in Indochina and on the China coast.

In the middle of February, the carriers launched initial attacks against Honshu with Tokyo as their main target. As part of a picket line over 30 miles in advance of the main forces, Gatling was once within 40 miles of Honshu. On 19 and 20 February, as part of Destroyer Division 99, she escorted North Carolina and Indianapolis to Iwo Jima to support the gallant marines who were fighting to wrest that volcanic fortress from Japan to become a base for B-29's damaged over the home islands. Rejoining the carrier task force, Gatling aided in new strikes against Honshu and Okinawa in late February and early March. She returned to Iwo Jima independently and throughout March blasted Japanese shore batteries to support the invasion. During this duty, the versatile and busy destroyer saved the entire crew of a B-29 forced down while returning from a mission against Nagoya.

On 29 March 1945, she stood out from Iwo Jima, escorting transports carrying victorious mirines to Guam. The destroyer then sailed to the United States for well-earned overhaul and repairs, arriving San Francisco 18 April.

After repairs and refresher training, Gatling escorted New Jersey and Biloxi to Eniwetok, bombarding Wake Island en route. Continuing to escort New Jersey, she arrived at Guam 9 August. There the news came that Japan had accepted the provisions of the Potsdam Declaration and agreed to surrender. The mighty sea war was won. Gatling now headed for Japan escorting transports bearing the 4th Marine Division as the 3d Fleet rendezvoused off Japan. On 3 September 1945, Gatling steamed into Tokyo Bay as a unit of the Allied Naval Occupation Forces of Japan.

During her aggressive career in World War II, Gatling traveled over 175,000 miles and fired 77 tons of high explosives from her guns. She sank two enemy ships and splashed eight Japanese planes, either as kills or assist. In addition to her other rescue missions, preserving the lives of over 400 sailors, she saved 37 aviators forced to ditch at sea. Finally, these heroic exploits through two busy battle-filled years were accomplished without the loss of a single man from enemy action, sickness, or accident. Gatling decommissioned 16 July 1946 and entered the Atlantic Reserve Fleet at Charleston, S.C.

After Communist aggression erupted in Korea, the veteran destroyer recommissioned 4 June 1951 at Charleston, S.C., Comdr W. J. Keating in command. Until August 1952 she operated off the Atlantic coast and in the West Indies before proceeding to the Philadelphia Naval Shipyard for modernization.

In the fall of 1952 Gatling as a unit of the NATO forces stood out of Newport, R.I., for Europe and visited Scotland, Norway, and Belgium in Operation "Mainbrace." Later she was active in Caribbean Operation "Springboard," calling at St. Thomas and San Juan. Returning to the Far Eastern waters she knew so well, Gatling arrived Tokyo 3 June 1953, and joined Task Force 77 supporting United Nations forces in Korea. Then, following the sun, she steamed to Manila, Saigon, Singapore, Colombo, and, passing through the Suez Canal, called at France and Portgual. She returned to Philadelphia in late summer 1953.

After repairs and training in New England waters, Gatling sailed to Portugal, France, and Italy. Recrossing the Atlantic and transiting the Panama Canal, the detroyer arrived Guayaquil, Ecuador, 7 October 1955. The following year she visited France and Cuba as a part of her varied operating schedule.

In 1957 Gatling again took part in NATO exercises, calling at Spain, Greece, Turkey, and Lebanon. Further operations brought her to England, to Spain again, and in 1958 to San Juan and Cuba. Her last major operations took her to Mediterranean ports of call, Pakistan and Iran, after which Gatling returned to her home base at Rhode Island 11 October 1959.

Gatling, after distinguished service in war and peace, again decommissioned 2 May 1960 and entered the Atlantic Reserve Fleet. At present she is berthed at Norfolk.