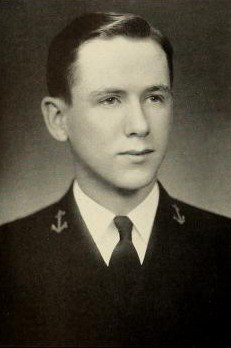 Louis Hallowell Bauer was born in Philadelphia, Pennsylvania, on September 22, 1911, son of Walter S. and Florence (Hallowell) Bauer.  He attended Germantown High School, Philadelphia, and the Severn School, Severna Park, Maryland, prior to his appointment to the US Naval Academy, Annapolis, Maryland, from his native state in 1931.  As a Midshipman he was a member of the Lacrosse and Swimming Teams and was a Cheer Leader.  Graduated and commissioned Ensign on June 6, 1935, he subsequently attained the rank of Captain, to date from March 1, 1944.

Following graduation from the Naval Academy in 1935, he reported on board the USS Ranger and in December 1937 was detached for flight training at the Naval Air Station, Pensacola, Florida.  Designated Naval Aviator on December 21, 1938, he remained at the Pensacola Air Station until January 1939 and the next month joined Fighting Squadron TWO, attached to the USS Lexington.  In March 1942 he transferred to Fighting Squadron TWO Detachment based on the USS Saratoga and served as Executive Officer until June 1942 and for a month was in command of that squadron.  In July 1942 he assumed command of Fighting Squadron SIX, operating from the USS Enterprise and later the USS Saratoga.  He received the Ribbon for, and a facsimile of the Presidential Unit Citation awarded the USS Enterprise and was personally awarded the Navy Cross and the Distinguished Flying Cross.  The citations for his personal awards follow in part:

Navy Cross: “For extraordinary heroism and distinguished service as Commander of a Fighting Squadron in action against enemy Japanese forces during the Solomon Islands Campaign of August, 1942.  With daring initiative and brilliant combat tactics, Lieutenant Bauer led his squadron in a vigorous attack against enemy shore objectives and while countering enemy aircraft opposition, he and his squadron succeeded in shooting down a total of forty-one Japanese planes…”

Distinguished Flying Cross: “For heroism and extraordinary achievement…as Commanding Officer of Fighting Squadron SIX, attached to the USS Saratoga, during operations against enemy Japanese forces in the Pacific War Area from January 20 to March 20, 1943.  Leading numerous fighter escort missions and strafing attacks on Munda, New Georgia, and Vila, Kolombangara in the Solomon Islands, (he) repeatedly braved heavy enemy antiaircraft fire to press his attacks to point-blank range and succeeded in inflicting heavy personal casualties on the enemy.  In early February, he shot down a hostile search aircraft before it could gain knowledge of the presence of our Carrier Task Force…”

Returning to duty ashore, he was assigned in October 1943 as Assistant Officer in Charge of Air Test at the Naval Air Test Center, Patuxent River, Maryland.  He remained there until August 1945, when he became Commander Carrier Air Group THREE, based on the USS Kearsarge.  He was a student at the Armed Forces Staff College, Norfolk, Virginia, from July 1947 until January 1948, after which he served as Head of the Armament Sub-Section, Office of the Chief of Naval Operations, Navy Department.

In July 1950 he joined the staff of Commander Air Force, US Pacific Fleet as Air Group Training Officer and in June 1952 reported as Executive Officer of the USS Bon Homme Richard.  “For meritorious service…(in that capacity) during operations against enemy aggressor forces in Korea from June 18 to December 24, 1952…” he was awarded the Bronze Star Medal with Combat “V.”  The citation further states: “A capable and resourceful leader, Commander Bauer successfully organized the ship’s crew into a closely knit, smoothly operating combat team and promoted and maintained a high standard of morals and esprit de corps among the officers and men of his ship…planned effective operations against the enemy, thereby contributing directly to the outstanding accomplishments of his ship and air group in the infliction of heavy damage upon hostile forces…”

He was All Weather Coordinator in the Office of the Assistant for Air Defense, Office of the Chief of Naval Operations, Navy Department, from June 1953 until August 1955, after which he had instruction at the National War College, Washington, DC until June 1956.  He next served as Head Employment Plans and Policy Section Operations Division on the staff of the Commander in Chief, Pacific Fleet, and when detached in March 1958 was ordered to command of the USS Orca.  In June 1959 he assumed command of the USS Yorktown (CVS-10), and a year later joined the Staff of Commander Anti-Submarine Defense Force, Atlantic (later Anti-Submarine Warfare Force, Atlantic).  On May 10, 1962 he was ordered to duty as Commanding Officer, Naval Air Station, Miramar, California.