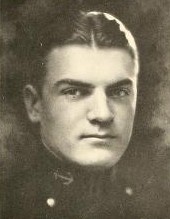 Edward William Clexton was born on August 15, 1900, at Staten Island, New York, son of Andrew R. an Mrs. Anna V. (Finnerty) Clexton. He attended the public schools of New York, and Columbia University, New York, New York, and had enlisted service in the US Army during World War I. he was appointed to the U.S Naval Academy, Annapolis, Maryland, from his native state in 1920, and was as a Midshipman was a member of the plebe and the varsity crew: “N” Club; and Water Polo Team; was Midshipman Lieutenant Commander (First Battalion); and was President of the Class of 1924. Graduated with distinction, fourth in his class, on June 4, 1924, and commissioned Ensign, he subsequently advanced to the rank of Rear Admiral to date from July 1, 1953. On February 3, 1956 he was promoted to the rank of Vice Admiral while serving as Chief of Naval Material, his date of rank February 9, 1956 and was retired in that rank effective July 1, 1960.

Following graduation from the Naval Academy in 1924, he was assigned to the Gunnery Department (Spot One) of the USS Mississippi for two years. In June 1926 he returned to Annapolis for instruction in Naval Architecture and Aeronautical Engineering at the Postgraduate School. Continuing instruction at the Massachusetts Institute of Technology, Cambridge, Massachusetts, he received the completed a course in Chemical Warfare at the Edgewood Arsenal, Edgewood, Maryland, in November 1929, after which he was assigned to the Naval Aircraft Factory, Philadelphia, Pennsylvania, as Shop Superintendent.

In June 1933 he reported for flight training at the Naval Air Station, Pensacola, Florida, and on August 8, 1934 was designated Naval Aviator. Upon detachment from that station, he served in the Air Department of the USS Lexington until June 1935. Then designated for Aeronautical Engineering Duty Only, he returned to the Naval Aircraft at Philadelphia. While serving there as Assistant Chief Engineer, in charge of catapult and arresting gear design, he made the first experimental shots on the landplane catapults, now installed on all aircraft carriers.

From June 1937 to March 1941 he was in charge of the design of dive-bombers and torpedo bombers, in the Airplane Design Section, Bureau of Aeronautics, navy Department, Washington, DC When detached, he reported for duty on the staff of Commander Aircraft, Atlantic Fleet, attached to the flagships USS Ranger and later USS Yorktown, and served successively as Fleet Air Maintenance Officer and Material Officer until August 1944. For “exceptionally meritorious” service in that assignment, he was awarded the Legion of Merit. The citation follows in part:

“…. Displaying excellent technical skill and untiring effort, (he) was directly responsible for the efficient organization and supervision of the equipment, repair, procurement and assignment of aircraft and aircraft material for all squadrons and other air units of this Fleet, including the design and installations of new weapons and armor in planes engaged in the anti-submarine campaign in the Atlantic. He directed certain military changes made in aircraft of many carrier groups destined for the Pacific, thereby greatly increasing their operational readiness, and also coordinated the flow of Naval aircraft to the European, Mediterranean, and African areas….”

Returning to the Bureau of Aeronautics in August 1944 for duty as Director of Maintenance, he assisted in the development of an integrated overhaul, maintenance and supply system known as Integrated Aeronautical Programs.

Also in that capacity, he provided means and coordination to maintain all aircraft of the Navy and Marine Corps, operating overhaul and maintenance facilities ashore and afloat, outfitting with aero material all fleet and shore units servicing aircraft and exercising management control over all overhaul activities.

For his development and administration of this program and especially for his work in establishing unified control of the continental overhaul shops, he received a Letter of Commendation, with authorization to wear the Commendation Ribbon, from Secretary of the Navy.

He remained in the Bureau of Aeronautics until July 1947, when he was transferred to the Office of the Fiscal Director as Budget and Appropriation Review Officer, Navy Department, Washington, DC On June 15, 1948 he assumed the duties of Assistant Director of the Office of Budget and Reports, Navy Department, and on October 18, 1950 became Assistant Comptroller and Director of Budget and Reports, with rank of Rear Admiral. In that assignment he was in charge of the Navy Department Budget for the Secretary in all hearing before Congressional committees and other higher authority. The budgets during his tenure of office totaled over one hundred billion dollars. On April 20, 1955 he reported as Deputy Comptroller of the Navy, Navy Department, and on February 1, 1956 assumed duty as Chief of Naval Material, Navy Department. “For exceptionally meritorious conduct… (in that capacity) from February 1, 1956 to June 30, 1960…” he was awarded the Distinguished Service Medal. The citation further states in part:

“Exercising sound professional judgment and dynamic leadership in administering the material program of the United States Navy, Vice Admiral Clexton has rendered distinguished service to the United States, adding significantly to our national defense posture. Through his keen foresight and diplomacy, he has fostered the highest degree of cooperation with private industry, and has greatly improved the material effectiveness of the areas of policy coordination of procurement, production, inspection and supply management. Possessing a wide knowledge of military and industrial organization and procedures, he skillfully directed the planning and implementation of a consolidation of the Bureau of Aeronautics and Ordnance into the Bureau of Naval Weapons within the remarkably short period of eight months…”

On July 1, 1960 he was transferred to the Retired List of the US Navy.