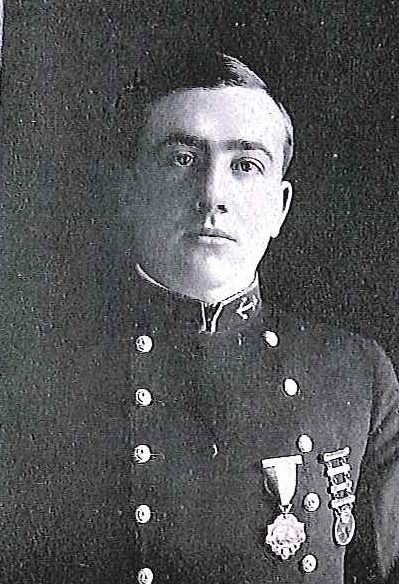 Captain Barber was born on June 11, 1889, in Owingsville, Kentucky, the son of Lewis Johnson Barber and Mrs. Nancy Alice (Reeves) Barber. He attended Morehead Normal, Morehead, Kentucky, and Bethany College, Bethany, West Virginia, before his appointment to the US Naval Academy at Annapolis, Maryland, from his native state in 1908. While a Midshipman he was a member of the Rifle Team in 1910, 1911, and 1912. Graduated and commissioned Ensign on June 7, 1912, and on September 3, 1912, was appointed an Assistant Paymaster, with rank of Ensign, in the Supply Corps, US Navy. Thereafter he progressed in grade to that of Pay Director, with rank of Captain, to date from June 9, 1943. On June 30, 1948, he was transferred to the Retired List of the US Navy.

After receiving his commission in the Supply Corps in 1912, Captain Barber was assigned the following month to USS Pudacah. He saw sea service in that vessel until November 1915, when he reported for duty at Port au Prince, Haiti. From May 1916 to April 1917, he served as Assistant to the Supply Officer at the Navy Yard, New York, New York, after which he boarded USS Chattanooga. Detached from the Chattanooga on October 1917, he returned to the States and reported as Assistant to the Supply Officer at the Navy Yard, Boston, Massachusetts. In November 1918 he transferred in the same capacity to the Fleet Supply Base, South Brooklyn, New York. During World War I he installed special billing machines in various Navy Yard, which type of machine is still in use and saves the Government several thousand dollars annually.

Between March and June 1919, Captain Barber served as Officer in Charge of a special course of instruction for officer of the Pay Corps, at New York University, New York, New York, and thereafter had three months duty in the Bureau of Supplies and Accounts, Navy Department, Washington, DC. In October 1919 he was assigned to the Naval Aircraft Factory, Philadelphia, Pennsylvania, as Accounting Officer, continuing to serve there until May 1920, when he joined USS South Carolina as Supply Officer. He transferred to USS Oklahoma, in the same capacity, in January 1921, and while attached to that battleship won the officers individual pistol match and was firing member of the Champion Ships’ Rifle Team of the Navy, which he had coached, at Guantanamo Bay, Cuba, in 1921.

Detached from the Oklahoma in February 1922, Captain Barber reported aboard USS Melville as Supply Officer, serving in that capacity until January 1923, when he returned to the States for duty as Disbursing and Accounting Officer at the Naval Base, San Diego, California. He was assigned to the Naval Station, Cavite, Philippine Islands until February 1928, after which he served as Supply Officer at the Naval Training Station, San Diego, California. During October and November 1930, he had duty at the Naval Supply Depot, Hampton Roads, Virginia, after which he joined USS Maryland as Supply Officer. While attached to that battleship he coached the officer and enlisted men’s pistol teams, which teams broke all previous Navy records in the match competition at Fort Lewis, Washington.

Detached from the Maryland, Captain Barber was assigned to the Naval Ammunition Depot, Iona Island, New York, as Supply and Disbursing Officer, between March 1934 and August 1936, and thereafter had duty as Disbursing Officer at the Navy Yard, New York, New York. On June 30, 1938, he was transferred to the Retired List of the US Navy.

Recalled to active duty on December 1, 1939, Captain Barber was assigned duty as Assistant to the Supply Officer at the Navy Yard, New York, New York, until June 1942. The following month he reported for duty in connection with the establishment of the Naval Training Station, Bainbridge, Maryland, and upon its establishment remained as Supply and Accounting Officer until September 1942. He served as Accounting Officer at the Navy Yard, Mare Island, California, and on February 18, 1946, he was again relieved of all active duty.