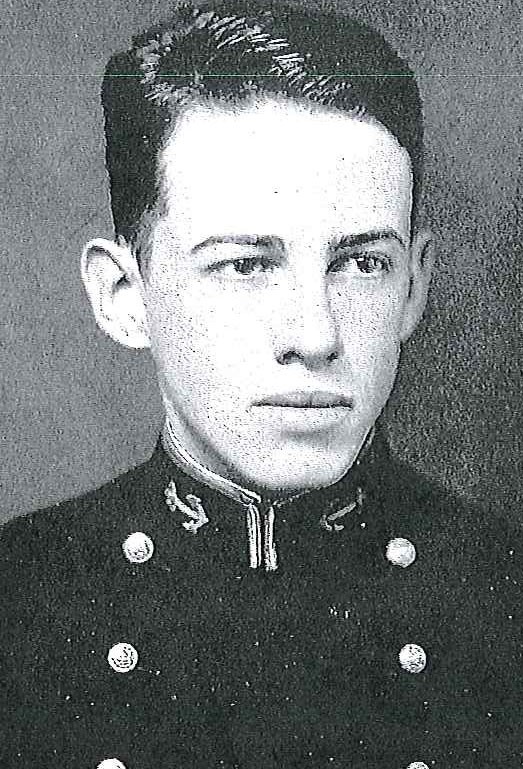 Parker Lowell Folsom was born in Portsmouth, New Hampshire, on May 21, 1913, son of Harold M. and Jane L. (Leavitt) Folsom. He attended Biddeford (Maine) High School and the University of Maine at Orono, for one and one-half years prior to his appointment to the US Naval Academy, Annapolis, Maryland, from the First District of Maine in 1932. As a Midshipman he was a member of the cross country and gymnasium teams. Graduated and commissioned Ensign on June 4, 1936, he received periodic promotions, attaining the rank of Captain to date from March 1, 1955.

Following graduation from the Naval Academy in 1936, he joined USS Astoria, and in November of that year was detached for fitting out duty in USS Vincennes, building at the Bethlehem Shipbuilding Corporation, Quincy, Massachusetts. He reported aboard that heavy cruiser upon her commissioning, February 24, 1937, to serve until June 1938, when he transferred to USS Phelps. Ordered to the Navy Yard, New York, New York, he assisted in the fitting out of USS Helena, and was assigned to that cruiser when she was commissioned September 18, 1939. He was aboard the Helena at Pearl Harbor, Territory of Hawaii, when the Japanese attacked the Naval Base there on December 7, 1941. The Helena was damaged during the attack by an enemy torpedo, and after minor repairs were effected, she returned to the United States for overhaul.

Detached from the Helena in July 1942, he attended a course in ordnance engineering at the Postgraduate School, Annapolis, Maryland. Completing his instruction, he reported in March 1944 aboard USS Essex. While attached to that aircraft carrier, he participated in every major campaign from the capture and occupation of Saipan to Tokyo Bay. “For exceptionally meritorious conduct. . .as Gunnery Officer of USS Essex and later, as Anti-aircraft Coordinator for Task Group Fifty Eight Deint[CTSCUND(1]  Three, in operations against enemy Japanese forces in the Pacific War Area from June 1944 to March 1945. . .” he was awarded the Legion of Merit with Combat “V”. The citation continues in part:

“Devising a system of anti-aircraft coordination, Commander Folsom enabled the Task Group to defend itself successfully from numerous air attacks from March 18 to 20, by the use of anti-aircraft fire alone. By his untiring efforts and professional skill, he brought the gunnery department of his ship to its highest level of efficeincy.”

He is also entitled to the Ribbon for, and a facsimile of the Presidential Unit Citation awarded the USS Essex.

In August 1945, he joined the staff of Commander First Carrier Task Force operating in the Pacific, and in December of that year transferred to the staff of Commander Fifth Fleet. Continuing staff duty, he served between January and October 1947, with Commander First Fleet, after which he was assigned to the Electronics Division, Office of the Deputy Chief of Naval Operations (Logistics), Navy Department, Washington, DC. He remained there until May 1951, and in August of that year assumed command of the USS Vesole. Detached from command of that destroyer, he was ordered in April 1953 to the Naval War College, Newport, Rhode Island reporting for duty under instruction in August of 1953. After graduation in June 1954, he remained there for a year as a member of the Staff (Logistics Department).

After three months of Special Studies with the Joint Staff (Joint Chiefs of Staff), he returned to the Naval War College to complete Naval Warfare II course and serve again as member of the Staff (Strategy and Logistics Department). This was followed by a two-month assignment in Special Studies with the Joint Staff, and in August 1956 he was assigned to Cruiser Force, Atlantic Fleet, for duty as Assistant Chief of Staff for Operations and Plans. There he was engaged in the development of Regulus I, Talos and Terrier guided missile doctrines.

“During this period, Captain Folsom, in addition to other demanding duties in connection with the development of the Navy’s Operations Control Centers, communications systems, and electronics warfare systems and equipment, served in the highly important capacity of Project Officer for the development of the revolutionary Navy Tactical Data System (NTDS). This project has produced a computerized network which increases the accuracy and tactical data handling capacity of the naval command control system many fold and, at the same time, lightens the burden heretofore borne by the commander involved. Captain Folsom’s distinguished contributions to the success of this vitally important system reflect the highest credit upon himself and the United States Naval Service.”