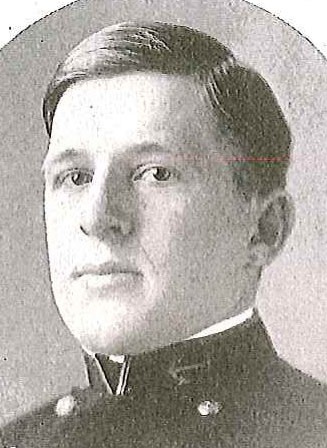 Herbert Aloysius Ellis was born in East Boston, Massachusetts, on October 13, 1886. He attended Mechanic Arts High School in Boston, prior to entering the US Naval Academy, Annapolis, Maryland, from his native state in 1906. Graduated on June 3, 1910, he served the two years at sea, as then required by law, before he was commissioned Ensign on April 2, 1912. Advancing progressively in rank, he attained that of Lieutenant Commander to date from October 1, 1921. He was transferred to the Retired List of the U.S. Navy on June 30, 1931 and was promoted (on the Retired List) to Commander, February 1, 1942 and Captain, October 30, 1945.

Following graduation from the Naval Academy in 1910, he joined USS New Hampshire and was serving in USS Michigan when he received his commission in 1912. Detached from the later [sic] in May 1912, he had duty in USS Chester for a month and in August transferred to USS Des Moines. In 1914 the Des Moines operated off the coast of Mexico protecting American lives and interest during the Mexican Intervention. Between December 1914 and May 1916 he was attached to USS Nebraska, after which he continued service afloat in USS Georgia until July 1916 and then in USS Kentucky.

At the outbreak of World War I, the Kentucky was stationed at the New York Navy Yard undergoing repairs and overhaul and training men of the New York and New Jersey Naval militia. She departed on May 1, 1917 for Hampton Roads, Virginia, where she remained until August 1917 training men for the ships of the fleet. She then put to sea with the Battleship Force for maneuvers and returned to the Chesapeake Bay area in September, where she resumed training men for engineering duty. In January 1918 he was assigned to USS Kansas, operating in the Chesapeake Bay area conducting fleet maneuvers and training crews. He remained on board that battleship for six months, joined USS Tacoma in August 1918 and in December of that year transferred to USS Huntington.

Between February and April 1919 he had duty in connection with the Harvard Radio School, Cambridge, Massachusetts and thereafter until December 1921 served in the Machinery Division at the Navy Yard, Boston, Massachusetts. In February 1922 he assumed command of USS Mac Leish, stationed in Mediterranean waters and in October of that year members of the crew of that destroyer formed a part of the landing force sent ashore at Smyrna, Turkey. He transferred to command of USS Overton in May 1923 and in December 1924 reported as Officer in Charge of the Navy Recruiting Station, Springfield, Massachusetts.

He became Commanding Officer of USS Williamson in December 1926 and in January and February 1927 participated in operations in Nicaragua. In November 1929 he was relieved of all active duty pending his retirement, effective June 30, 1931.

After his retirement he entered the real estate business. Prior to being called to active duty in 1939 he had served for a number of years as an assessor for the City of Boston.

Recalled to active Naval service in October 1939, he was assigned to the First Naval District with headquarters in Boston, Massachusetts, where he served in the District Intelligence Office, as Officer in Charge of the Public Relations Office, as District Inspection Officer and as Assistant Commandant for Logistics. In January 1945 he assumed command of USS William Ward Burrows, which under his command participated in the assault and occupation of Okinawa Gunto. He continued to serve in that assignment until August 1945 and on December 4, that year was again relieved of active duty.