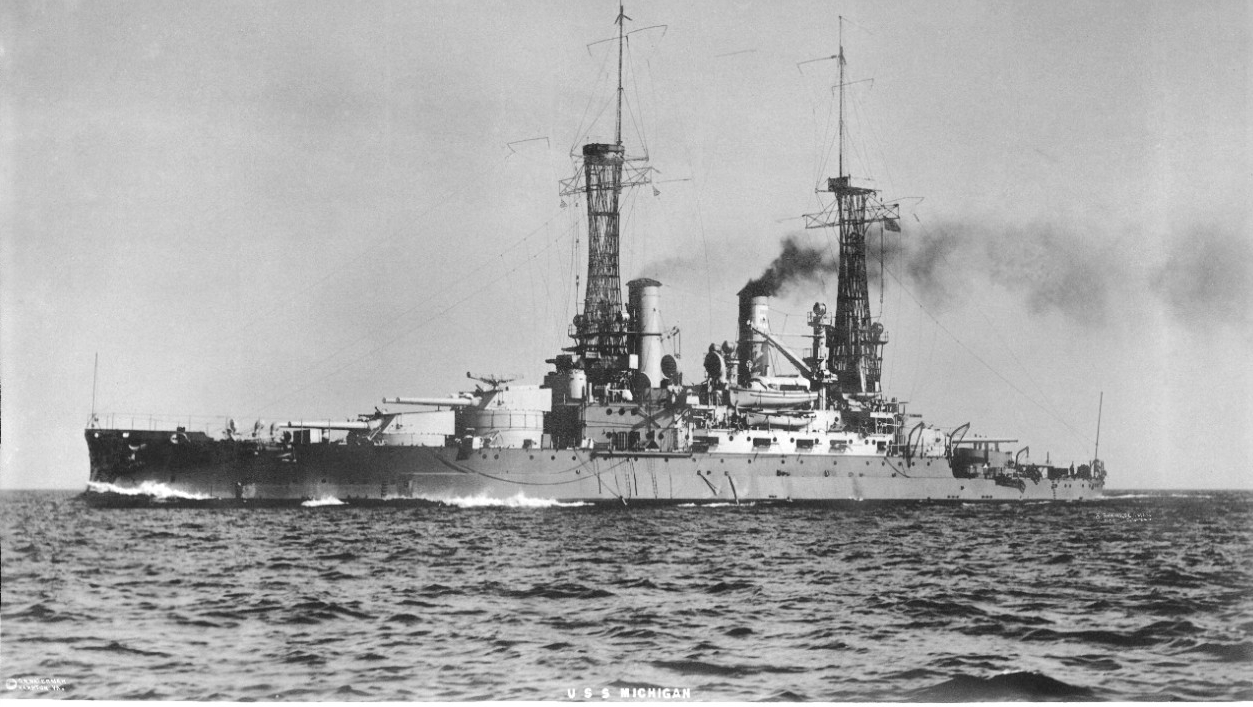 Michigan (Battleship #27) photographed circa 1916-1917 by O.W. Waterman, Hampton, Virginia. The ship is wearing a horizontal two-tone paint scheme, possibly an experimental camouflage. The photograph, given to Michigan (SSGN-727) by Mr. Sanford Aronoff, was donated by the ship to the Naval History and Heritage Command in 2008. U.S. Naval History and Heritage Command photograph. Catalog#: NH 106438.

Assigned to the Atlantic Fleet Michigan conducted shakedown off the east coast and in the eastern Caribbean until 7 June 1910. Standing out of New York Harbor 29 July, the battlewagon then steamed along the New England and middle Atlantic coasts on maneuvers. On 2 November she departed Boston, Mass., for a training cruise to western Europe. After visiting Portland, England, she arrived Cherbourg, France, 8 December. She sailed 30 December for the Caribbean, touched Guantanamo Bay, Cuba, 10 January 1911, and reached Norfolk on the 14th.

Michigan operated along the Atlantic coast until standing out from the Virginia Capes 15 November 1912 for a cruise to the Gulf of Mexico. After visiting Pensacola, New Orleans, and Galveston, she arrived Vera Cruz, Mexico, 12 December. She headed for home 2 days later and reached Hampton Roads on the 20th. She operated along the east coast until departing Quincy, Mass. 6 July for the Gulf coast of Mexico to protect American interests endangered by civil strife in Mexico. The battleship anchored off Tampico on the 15th and remained alert off the Mexican coast until sailing for New York 13 January 1914, reaching Brooklyn Navy Yard on the 20th.

She began a run from Norfolk to Guacanayabo Bay, Cuba, 14 February and returned to Hampton Roads 19 March. Underway again 16 April she joined American forces upholding American honor at Vera Cruz. Reaching that troubled Mexican city 22 April, she landed a battalion of Marines as part of the main occupation force, then operated off the Mexican coast heading home 20 June and entered the Delaware Capes on the 26th. 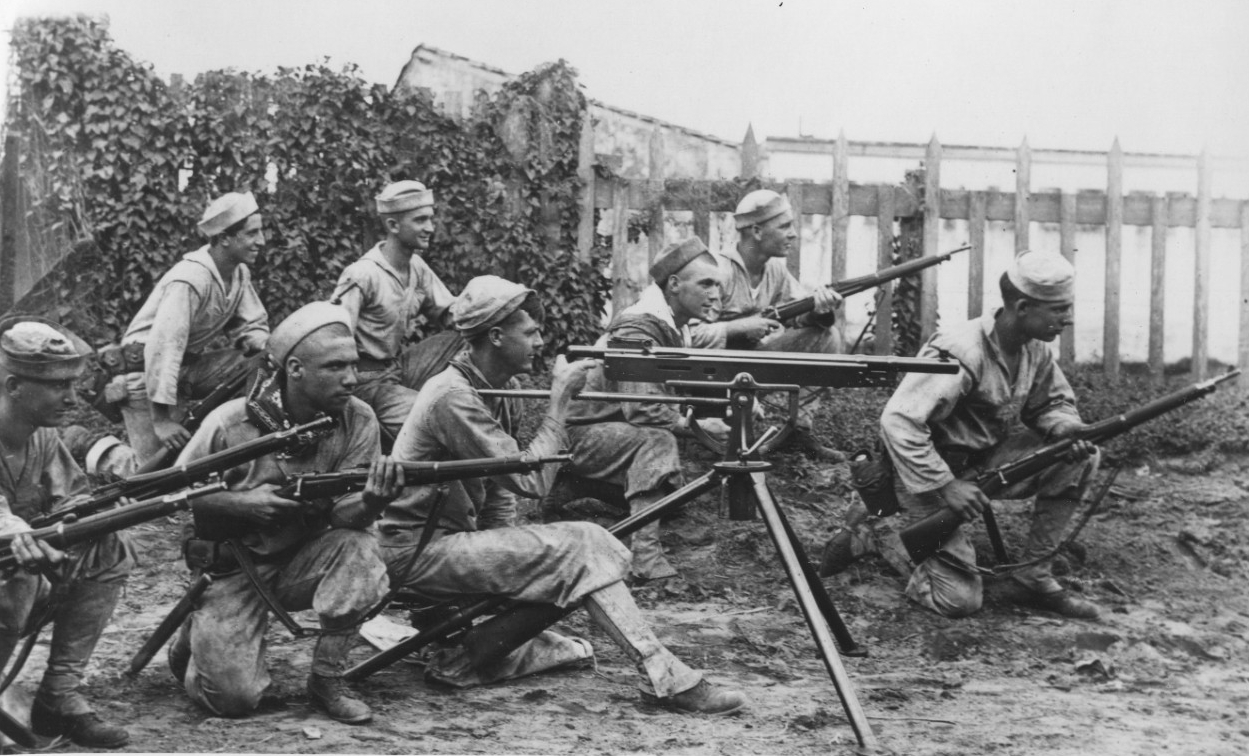 Men of the Michigan (BB-27) Battalion on the outskirts of Vera Cruz, circa late April 1914. They are wearing dyed Whites and are armed with a Colt M1895 machine gun and M1903 rifles. Note the colorful bandannas worn by two of these men. Courtesy of the Naval Historical Foundation. U.S. Naval History and Heritage Command photograph. Catalog#: NH 100616.

Michigan next put to sea 21 October 1914 and from that time until the eve of America's entry into World War I, operated out of various ports on the eastern seaboard. Assigned to Battleship Force 2, 6 April 1917, the warship escorted convoys, trained recruits, and engaged in fleet maneuvers and battle practice. On 15 January 1918, while steaming in formation with the fleet off Cape Hatteras. Michigan's foremast buckled and was carried away over the port side as the battlewagon lurched violently in the trough of a heavy sea. Six men were killed and 13 injured, five seriously, in this accident. Michigan proceeded to Norfolk where the next day she transferred her casualties to Solace (AH‑5). On the 22d she entered Philadelphia Navy Yard for repairs. Early in April she resumed operations off the east coast and trained gunners in Chesapeake Bay until World War I ended.

Ordered to duty with the Cruiser and Transport Force in late December 1918, the battleship made two voyages to Europe, 28 January to 3 March and 18 March to 26 April 1919, returning 1,062 troops to the United States.

Following overhaul at Philadelphia during May and June, Michigan resumed training exercises in the Atlantic until 6 August, when she was placed in limited commission at Philadelphia Navy Yard. She next put to sea 19 May 1919, sailing to Annapolis to embark midshipmen for a training cruise through the Panama Canal to Honolulu, Hawaii, arriving 3 July. The cruise continued to major west coast naval bases and Guantanamo Bay before the battleship returned home 2 September. She returned to Philadelphia 5 September, and was placed in ordinary until sailing 4 April 1921 for the Caribbean. Returning Hampton Roads 23 April, she reached Annapolis 28 May to begin her second midshipmen training cruise. She got underway 4 June for Europe, visiting Christiana, Norway; Lisbon, Portugal; and Gibraltar, and returning via Guantanamo to Hampton Roads 22 August. The veteran battleship put to sea 31 August to make her final cruise up the Delaware River to Philadelphia, arriving 1 September. Michigan decommissioned at Philadelphia Navy Yard 11 February 1922 and was stricken from the Navy list 10 November 1923. In accordance with the treaty limiting naval armaments, she and four other battleships were scrapped by the Philadelphia Navy Yard during 1924. Materials from their hulls were sold to four different foundries. 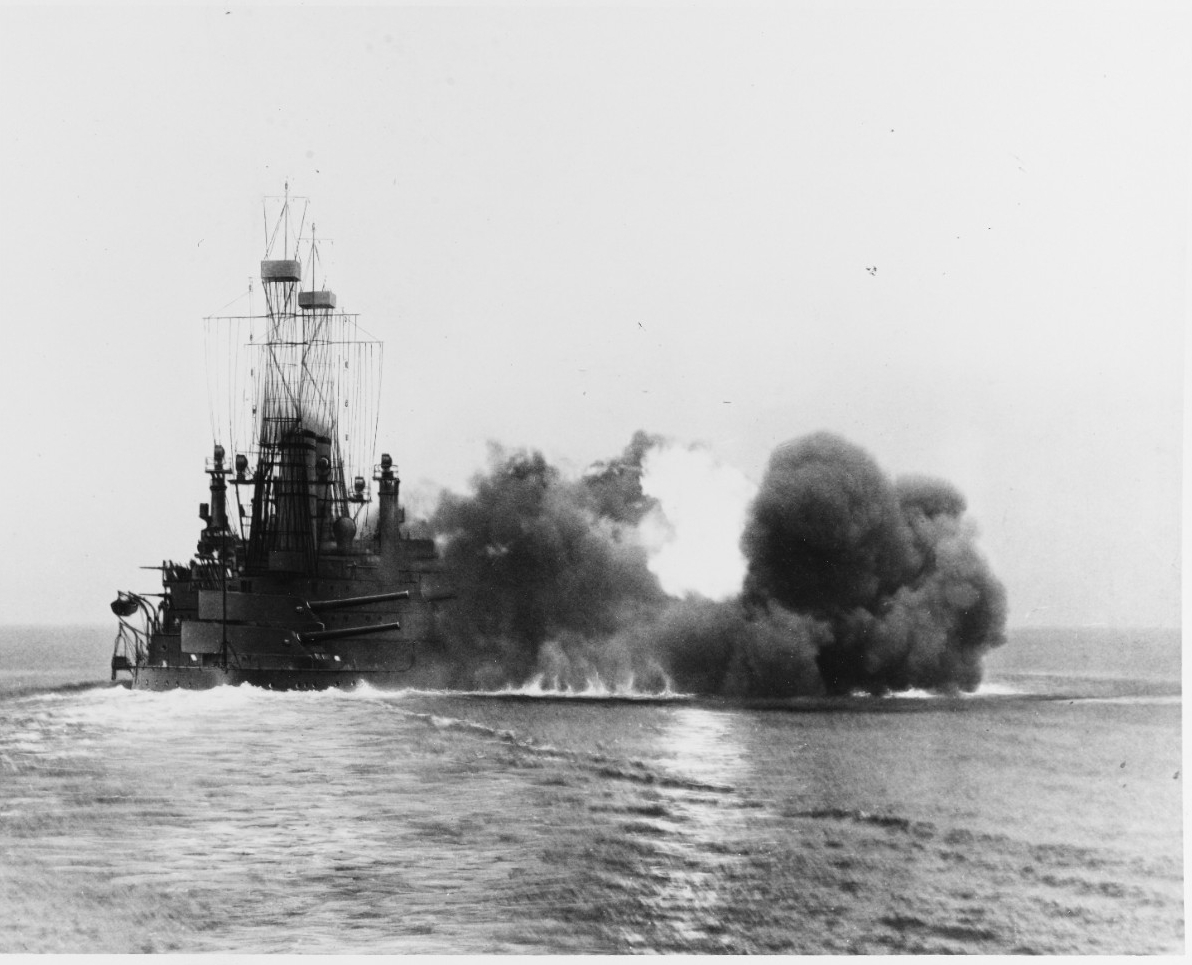 Michigan (BB-27) firing a broadside with her 12/45 main battery guns, 1912. Photographed by Enrique Muller. This image has been retouched to emphasize guns and masts. U.S. Naval History and Heritage Command photograph. Catalog#: NH 66299.