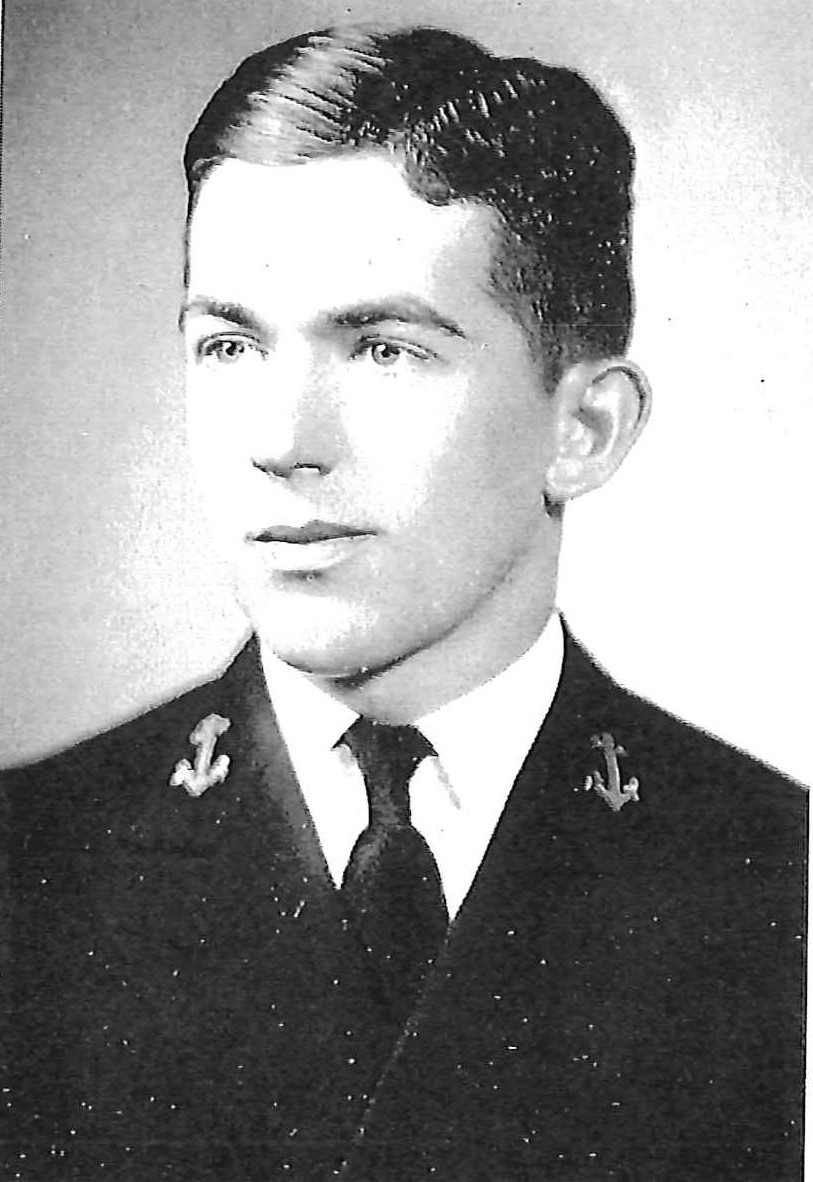 Born in Muncy, Pennsylvania, on 30 July 1913, Captain Clay attended high schools in Washington, DC, and Cambridge, Massachusetts, where his father, and Army Officer, was stationed. He entered the Navy Academy on appointment from Pennsylvania on 12 June 1931, and was graduated with the Class of 1935. He subsequently attended the Naval Postgraduate School (1942-44) where he specialized in Underwater Ordnance, and the Naval War College 1953-56) where he served first as student and then as a member of the Staff. He attended the rank of Captain to date from 1 January 1954.

His early service se duty in the USS Memphis and USS Litchfield, the latter from May 1937 to July 1942, during which period he rose from most junior officer in Communications, through Torpedo, Gunnery and Engineering Officer, to Executive Officer, while that destroyer operated as Tactical Flagship of the Submarine Forces at Pearl Harbor prior to and shortly after the outbreak of World War II.

During  the latter period of the war he participated in action in the Southwest Pacific and Iwo Jima as Commanding Officer of the USS Gamble and Commander Mine Division II; at Okinawa as Commander Mine Division II (in USS Bresse) and as Commander Task Unit 52. 6.5 (Mine Destruction Unit of 5 ships); and the Japanese Homeland as Commanding Officer of the USS Adams and of Task Group 52. 2 (mine-sweepers). For meritorious service at Iwo Jima in February 1945, and in Japanese Empire waters following the cessation of hostilities, while engaged in minesweeping operations for the safe of US Occupational Forces, he was awarded the Bronze Star Medal and a Gold Star in lieu of the Second Bronze Star Medal, respectively.

He remained at sea until April 1947, serving successively as Operations Officer, Staff, Commander Task Group 52.3 on the USS Monadnock; Operations Officer, Staff of Commander Mine Force, Pacific Fleet, and as Assistant Readiness Officer on the staff of Cincpacflt to serve from January 1950 to May 1952 in the Plans Division. During this period he served for October to December 1950 under Commander Task Group 95 for temporary duty in connection with the heavy mine countermeasures effort of the United Nations forces engaged in the Korean conflict. He was awarded a Letter of Commendation with a Gold Star while in this duty assignment. For a year thereafter he was Executive Officer of the USS Rochester, and was awarded a Gold Star in lieu of the Third Bronze Star Medal for meritorious achievement in Korea from 1 December 1952 until 16 1953.

After his return to the United States in August 1953, he attended the Naval War College, then served in the Staff of the Naval War College until June 1956, when he assumed command of the USS Washburn (AKA-108). Under orders of 9 April 1957, he reported for duty as Industrial Control Officer at the Naval Gun Factory, Washington, DC In October 1959 he was ordered to command of Amphibious Squadron Six and, after a year at the National War College, Washington, DC, reported in June 1962 to the Office of the Chief of Naval Operations, Navy Department, for duty.

Bronze Star Medal, “For meritorious service as Commanding Officer of the USS Ganble and as Commander Mine Division Two in action against enemy Japanese forces during the assault of Iwo Jima in February of 1945. When his vessel sustained two bomb hits in the fireroom which resulted in the explosion of the boilers, Commander Clay directed excellent damage control measures to maintain the vessel afloat until it could be towed to a rear area, thereby contributing materially to saving the ship…” (Combat “V” authorized)

Gold Star in lieu of Second Bronze Star Medal: “For meritorious service as a Task Group Commander, and later as Chief Staff Officer to a Task Group Commander of the Mine Force, Fifth Fleet, engaged in minesweeping operations in Japanese Empire waters, from September 1 to November 1, 1945… (He) directed the sweeping of a moored minefield at the entrance of Kagoshima, Kyushu, Japan, and contributed materially to the opening of one of the first Japanese ports for safe entry of United States Occupational Forces. Later, he rendered invaluable assistance to his commander during the sweeping of highly dangerous moored mined in the channel of Nagoya…”

Gold Star in lieu of Third Bronze Star Medal (Combat “V”): “For meritorious service as Executive Officer on the USS Rochester during combat operations against enemy North Korean and Chinese Communist forces in the Korean Theater during from 1 December 1952 to 16 March 1953. During this period Commander Clay planned and directed the execution destructive gun strikes against enemy installations and lines of communication at Kajo, Wonsan and from Hungnam to Sonjin, Korea, and the rendering of gunfire support to the United Nations Ground forces at the battle-line near Kosong, Korea… he displayed outstanding initiative, ability, judgment and leadership…”

Letter of Commendation (Ribbon and Combat “V”) from Commander Amphibious Forces, Pacific; “For excellent service in the line of his profession as Commander of a Mine Investigating and Disposal Unit from April 1 to June 15, 1945, during the assault on Kerama Retto. By his initiative, untiring efforts and professional skill, he kept his unit operating with maximum effectiveness, and thereby maintained the waters of these islands safe from enemy mines…”

Letter of Commendation (Star and Combat “V”): “For meritorious achievement in connection with operations against the enemy during the period 24 October to 22 November 1950. While serving as Intelligence Officer on the Staff of Commander Task Element 95-69, which was engaged in mine sweeping at Chinnpo, Korea, Commander Clay proceeded to Chinnpo to interview civilians  and local seaman regarding enemy mining activities. With the intelligence thus obtained, safe entry was made through many enemy mines to the port… This advance information was necessary to provide ground forces logistics support from the sea…”

6/62 Office of the Chief of Naval Operations, Navy Depot.