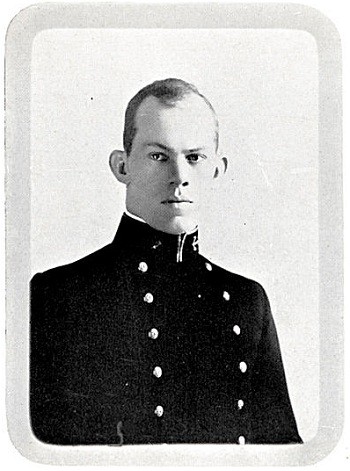 Charles Horatio McMorris was born in Wetumpka, Alabama on 31 August 1890, son of Spencer James and Annie Amanda (Robinson) McMorris. He attended public schools in Wetumpka, before his appointment to the US Naval Academy, Annapolis, Maryland, from his native state in 1908. Graduated and commissioned Ensign in June 1912, he subsequently progressed in rank until his promotion to Rear Admiral to date from May 13, 1942. He served in the temporary rank of Vice Admiral from 23 September 1944 until July 1948, when he reverted to his permanent rank of Rear Admiral. On 1 September 1952 he was transferred to the Retired List of the US Navy, and was advanced to the rank of Vice Admiral on the basis of combat awards.

Following graduation from the Naval Academy in 1912, he had consecutive sea service in the battleships Delaware, Montana, and New Hampshire, and while aboard the latter participated in the occupation of Vera Cruz, during the Mexican Campaign in 1914. In August of that year he returned to the USS Montana for torpedo instruction after which, on 18 November 1914, he joined the USS Maryland. While serving in that battleship he assisted in salvaging the USS F-4, which sank at Honolulu, Territory of Hawaii, in 1915, and received a Letter of Commendation for assisting in rescuing passengers from a vessel grounded in the Gulf of Lower California during a storm that year.

In January 1917 he reported to the Navy Yard, Mare Island, California, where the USS Shaw was building, and joined that destroyer upon her commissioning, 9 April 1917. He was aboard the Shaw when she proceeded on 17 June to Queenstown, Ireland, to join the Destroyer force during the early part of World War I. Detached from Shaw on 30 July 1918, returned to the United States for fitting out duty in the USS Meredith at the Fore River Shipbuilding Corporation, Quincy, Massachusetts, and served as her Executive Officer from her commissioning, 29 January 1919 until June of the same year.

He assumed command of the USS Walke on 13 June 1919 and was detached a month later for three months duty at the Navy Recruiting Station, Pittsburgh, Pennsylvania. During the next two and a half years he served in the Detail Section, Officer Personnel Division, Bureau of Navigation, Navy Department, Washington, DC. In June 1922 he joined the USS Baltimore as Navigator, and in September of that year transferred to the USS Burns. He continued to serve as Executive Officer of the Burns until December 1924, when he reported for duty with Mine Squadron Two, Fleet Base Force.

Between September 1925 and May 1927 he was Instructor in the Department of Seamanship and Flight Tactics at the Naval Academy, also serving as Assistant Editor of the US Naval Institute Proceedings. In May 1927 he assumed command of the destroyer Shirk operating off the coast of Nicaragua during the Second Nicaraguan Campaign with Destroyer Squadrons Battle Fleet. He remained aboard the Shirk until February 1930 when he was transferred in the same capacity, to the USS Elliot.

Returning to the Naval Academy in July 1930, he served until May 1933 as Instructor in the Department of English and History, and for two years during that period was Editor of the US Naval Institute Proceedings. Following duty as Navigator of the USS California, he was again assigned in July 1935 to the Detail Section, Officer Personnel division, Bureau of Navigation.

He attended the senior course at the Naval War College, Newport, Rhode Island, from July 1937 to May 1938, after which he joined the staff of Commander Scouting Force, US fleet, as Operations Officer. He served in that assignment, which also included duty from October 1939 to January 1941 as Operations Officer of the "Hawaiian Detachment" until 1 February 1941 when he reported as War Plans Officer on the staff of commander in Chief, US Pacific Fleet. "For exceptionally meritorious conduct (in the latter assignment) from December 7, 1941 to April 15, 1942..." he was awarded the Legion of Merit. The citation continues in part:

"During the early critical days of the days of the Pacific War, (he) rendered invaluable service to his command and, by his initiative and judgment, contributed materially to the conduct of our operations against the Japanese Empire..."

From 14 May to 9 November 1942, he commanded the cruiser San Francisco, and for heroism as Commanding Officer during the action of 11-12 October 1942, he was awarded the Navy Cross. The citation follows in part:

"...(He) fought his ship valiantly, maneuvering with expertness of able seaman and striking at the enemy with determined and effectiveness gunfire despite the difficulties of night combat. As Captain of the Flagship, he rendered valuable service to the Task Force Commander and contributed materially to the success of our forces."

He is also entitled to the ribbon for and a facsimile of the Presidential Unit Citation awarded the USS San Francisco for outstanding performance in action against enemy Japanese forces off Savo Island, in the Solomon Islands on the night of October 11-12, (1942)..."

In December 1942 he assumed command of Cruiser Task Force Eight, operating in the North Pacific. Referring to the Battle of Komandorski Islands, Admiral King's first report on the United States Navy at War states "...he enemy, late in March 1943, under took to support the two garrisons by sending through a small but heavily protected convoy. Early on the morning of March 26, a unit of our north Pacific Force, commanded by Vice Admiral C. H. McMorris encountered the advancing enemy force, which included heavy and light cruisers, some destroyers and cargo ships, about sixty-five miles south of the Komandorski Peninsula. Our Force, although outnumbered, closed for attack.

"The engagement which followed developed into a running gunfire duel between our cruisers Salt Lake City and Richmond, and enemy cruiser. This was followed by a torpedo attack delivered by our destroyers, upon completion of which the enemy retired in the direction of Paramushiru, 500 miles to the westward. Our damage was the enemy is not definitely known, a superior enemy force, after being engaged for three and one-half hours, had been prevented from supporting Japanese garrisons at Kiska and Attu..."

He was awarded the Distinguished Service Medal for exceptionally meritorious service "...as Commander of a Cruiser Task Group in action against enemy Japanese surface forces in the Aleutian Area March 26, 1943. Daringly intercepting an enemy cruiser and destroyer force, escorting a convoy of the train vessels, (he) out maneuvered the enemy and launched a brilliant attack. Tactically disposing his greatly outnumbered force for maximum striking power, he achieved a complete rout of the enemy, compelling the Japanese to withdraw toward the Kuriles with three badly damaged cruisers while impairment to our forces was comparatively light..."

In June 1943 he joined the staff of the Commander in Chief, US Pacific Fleet and Pacific Ocean Areas, as Chief of the Joint Staff and Aide. For exceptionally meritorious service..." in that capacity during the final phase of the hostilities of World War II, he was awarded a Gold Star in lieu of a Second Distinguished Service Medal. The citation continues in part:

"Charged with the coordination of work by Staff members, (he) supervised the preparation and execution of strategic and tactical plans for Naval Operations against the enemy Japanese forces in the Gilberts, Marshalls, Marianas, Western Caroline Islands, Iwo Jima and Okinawa and, in addition, rendered invaluable assistance in the capture of Hollandia and Morotai in the support of the Philippines Campaign, in attacks on the home islands of the Japanese empire and in carrying out the Naval phase of the occupation after the enemy's defeat..."

In February 1946 he became Commander Fourth Fleet, and was relieved of that command in September 1946 for duty on the General board, Navy Department. He assumed duty as President of that board on 10 December 1947, and continued as such until August 1948, when he reported as Commandant Fourteenth Naval District, Pearl Harbor, Territory of Hawaii, and Commander Hawaiian Sea Frontier. On 1 June 1951, he assumed additional duty as Commander Naval Base, Pearl Harbor, and continued service there until 1 September 1952, when he was transferred to the Retired List of the US Navy. He died on 11 February 1954, at Valparaiso, Chile, while visiting his son.

After his retirement Vice Admiral McMorris resided in Wetumpka, Alabama with his wife, the former Elizabeth M. Case, daughter of Colonel David Brainard Case, USA, and Mrs. Case. Their son, David Spencer McMorris, Lieutenant, US Naval Reserve during World War II, was aboard the USS South Dakota at the time of the surrender ceremonies in Tokyo Bay, 2 September 1945 (EST). He was the Second Secretary of the US Embassy at Santiago, Chile.