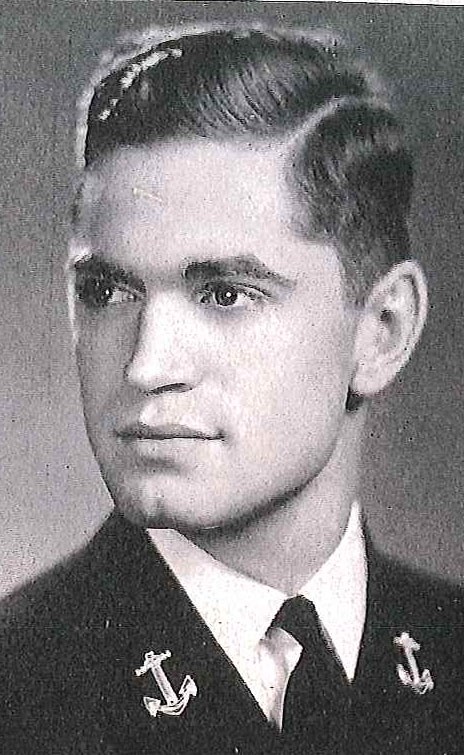 Victor Delano was born in Washington, DC on December 20, 1919, son of Captain Harvey Delano, USN and Marcia (Murdock) Delano, both now deceased. He attended Rogers High School, Newport, and Severn School, Severna Park, Maryland, before entering the US Naval Academy, Annapolis, on July 2, 1937, by appointment from Kansas. He was graduated with distinction, eighth in a class of 399 members, and received the degree of Bachelor of Science in Electrical Engineering and was commissioned Ensign in the US Navy, February 7, 1941. He subsequently advanced in rank to that of Captain, to date from July 1, 1959.

Upon graduation from the Naval Academy, he was assigned to USS West Virginia (BB-48) and served as a junior officer in the Gunnery Department of the battleship until she was sunk by the Japanese at Pearl Harbor on December 7, 1941. He had brief similar duty on board USS Pennsylvania (BB-38), and in January 1942 was transferred to USS San Juan (CL-54). He received a Navy Commendation Medal with Combat “V.” The citation follows:

“For meritorious conduct in the performance of his duties while serving as Radar Officer of USS San Juan during the period August 7, 1942 to April 24, 1943. He formed and acted as Evaluator of the Ships Combat Information Center which, under his leadership, rendered invaluable service in Radar Navigation as his ship led out forces in the night approach to the landing area at Guadalcanal on August 6-7, 1942. During the bombardment support, he demonstrated outstanding skill, assisting in the designation of targets and maintaining a clear and accurate plot of the constantly changing tactical situation. In the Battle of Santa Cruz, October 26, 1942, he maintained an accurate track of the numerous enemy attacking groups and provided information to the ship and gunnery control situations concerning the impending attacks…”

In December 1943 he reported for duty in connection with fitting out USS Wedderburn (DD-684), and served as Gunnery Officer  (eight months) and Executive Officer (nine months) after the commissioning of that destroyer on March 9, 1944. Detached from the Wedderburn in August 1945, after participating in numerous operations in the Pacific during the last year of hostilities, including the Battle of Surigao Strait and THIRD Fleet operations against Okinawa and the Japanese homeland, he returned to the United States. During the period January through June 1946 he commanded USS Shoveler (AM-382), which participated in occupation service in the Asiatic Area.

From July 1946 until May 1947 he was a student in Ordnance Engineering at the Naval Postgraduate School, Annapolis, and continued the course at Massachusetts Institute of Technology, Cambridge, Massachusetts, from which he received the degree of Master of Science in Nuclear Physics in 1949. From September of that year until November 1951 he was assigned to the Los Alamos Scientific Laboratory as Program Director for the Department of Defense Atomic Weapons Effects Tests, Task Group 3.1, Operation Greenhouse.

He received a Letter of Commendation, with Ribbon, from the Secretary of the Air Force (General Order#63) as follows: “For distinguishing himself by meritorious service from September 1, 1949 to July 1, 1951. As Director of Programs 5 and 6, Task Group 3.1, Joint Task Force 3 (Operation Greenhouse) Commander Delano supervised and coordinated all the details of these complex technical programs of the Department of Defense. Through his initiative, technical and administrative ability, these programs turned in an outstanding performance, and results obtained will be of untold value to the Armed Forces in the future of atomic energy…”

In January 1952 he assumed command of USS Eversole (DD-789), a destroyer assigned to the Naval Forces, Far East, for combat duty in the Korean Area. He was awarded the Bronze Star Medal, with Combat “V,” and citation, in part, as follows:

“For meritorious service as Commanding Officer of USS Eversole during combat operations against enemy North Korean and Chinese Communist forces in the Korean Theater from December 3, 1952 to January 15, 1953. Commander Delano consistently demonstrated an aggressive competence which demanded and attained a high state of performance from his crew…The Eversole participated in offensive operations against enemy forces in Korea as a unit of Task Force 77 and Task Force 95. As surface escort for USS Missouri from December 5 to 16, 1952, the Eversole’s gunfire effectively cut enemy rail lines, neutralized a possible enemy gun emplacement and scored direct hits on two enemy gun emplacements in Wonsan Harbor. As Commander, Bombardment Unit of the East Coast Blackading and Escort Group, he effectively coordinated all ship movements in an assigned area, judiciously deployed vessels assisting his units to obtain maximum patrol coverage, and worked in close liaison with friendly ground forces ashore, inflicting heavy damage on enemy shore installations and equipment…”

Detached from the Eversole in July 1953, he reported a month later to the Armed Forces Staff College, Norfolk, Virginia, where he was a student until January 1954. In February he became Assistant to the Assistant Director for Nuclear Applications (Research and Development Division) in the Bureau of Ordnance, Navy Department, Washington, DC. Upon completion, of that tour of duty, in August 1956 he served as Assistant Plans Officer on the Staff of the Commander SECOND Fleet, headquartered at the US Naval Base, Norfolk, Virginia. From August 1958 until May 1959 he was Executive Officer of USS Newport News (CA-148), and the next month became Assistant to the Director, Long Range Objectives Group, Office of the Chief of Naval Operations, Navy Department.

In August 1961 he reported for instruction at the Industrial College of the Armed Forces, Washington, DC, and in July 1962 assumed command of USS Taconic (AGF-17). Detached from that vessel in July 1963, he had a short tour of duty on the Staff of the Commander in Chief, US Atlantic Fleet, after which he served on the joint Staff of the Commander in Chief, Atlantic. In April 1965 he became Commander Amphibious Squadron EIGHT and while in that assignment was awarded a Gold Star in lieu of a Second Navy Commendation Medal.

In August 1966 he reported as Chief of Staff and Aide to Commander Amphibious Force, Atlantic Fleet, and in September 1967 he was assigned to the Office of the Chief of Naval Operations as Head, Congressional and Policy coordination Board.

Captain Delano is a member of the US Naval Institute, the Chevy Chase Club, Army and Navy Club, the Naval Academy Alumni Association, the Society of the Sigma Xi, and the University Club of San Francisco.