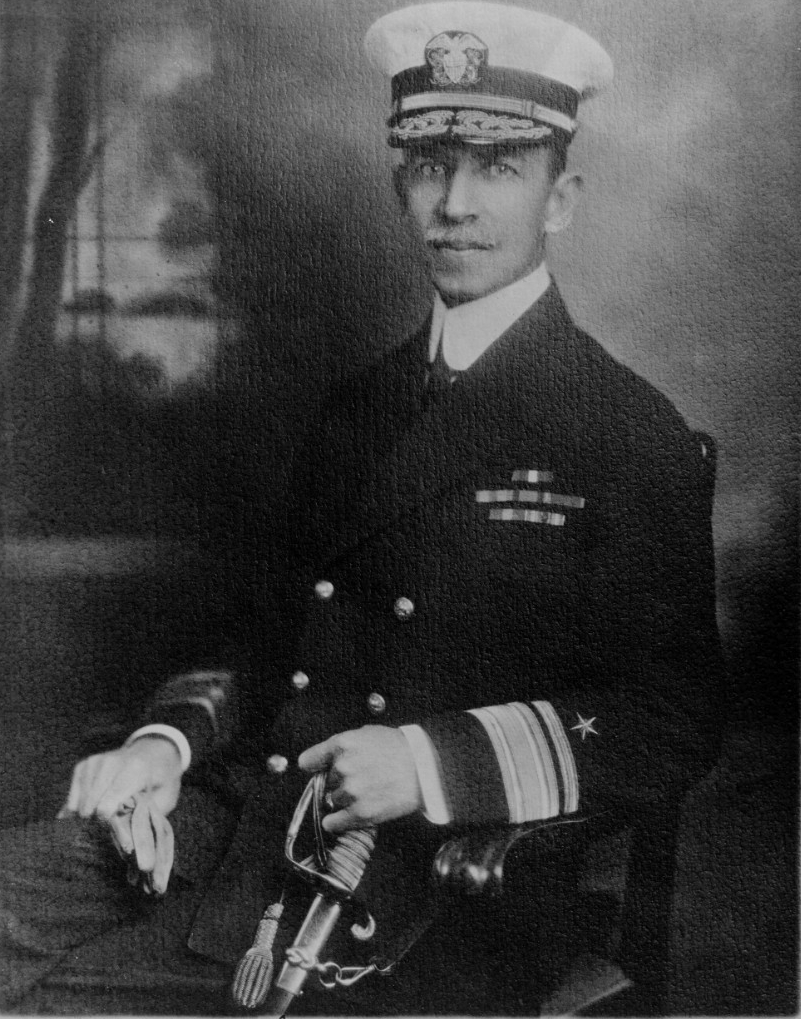 Louis McCoy Nulton was born on 8 August 1869 in Winchester, Virginia. He was appointed in 1885, to the US Naval Academy, Annapolis, Maryland, from the Seventh District of his native state by the Honorable CTO Ferrall. Graduated seventh in a class of thirty-five, on 7 June 1889, he served the two years at sea, then required by law, before he was commissioned Assistant Engineer, with the relative rank of Ensign, on 1 July 1891. He was promoted to Passed Assistant Engineer, with the accompanying rank of Lieutenant (junior grade), on 19 October 1896, and on 3 March 1899, he was advanced to Lieutenant. He subsequently attained the rank of Rear Admiral, to date from 12 August 1921, and served in the temporary rank of Vice Admiral from 26 June 1928 to 21 May 1929, and Admiral from that date until 16 June 1930. Transferred on 1 September 1933 to the Retired List of the US Navy, in his permanent rank of Rear Admiral, he was promoted to Admiral on the Retired List by Act of Congress, 16 June 1942.

Following graduation from the Naval Academy in 1889, he joined USS Chicago, flagship of the "Squadron of Evolution" (ships constructed which marked the change from the old Navy to steam). He continued duty in the Chicago, operating on European Station, until July 1892, when he transferred to USS Charleston. While aboard her, he served as Aide to the Medical Officer of the landing party from Charleston ashore at Seoul, Korea, in July 1894. From August of that year until August 1895, he served in USS Philadelphia.

He was assigned to the Naval Academy until March 1898, interspersed with duty, between May and August 1896 in the practice ship Bancroft. Continuous sea service followed in USS Arethusa, USS Abarenda, USS Yosemite, USS Concord, USS Baltimore, again in Concord, USS Bennington and USS New Orleans. He was aboard the latter, operating in the Caribbean area, during the Spanish American War. In June 1901 he joined USS Solace, and in August of the same year was detached to report for brief instruction at the Naval Gun Factory, Navy Yard, Washington, DC. Completing the course later that month, he was then ordered to the Navy Department, Washington, DC, for duty in the Office of Naval Intelligence.

He joined the newly commissioned battleship Texas on 4 November 1902, and served in her until August 1905, when he was assigned to the Naval Academy, as an Instructor in the Department of Ordnance and Gunnery. Ordered, in April 1907 to the Norfolk Navy Yard, he had duty in connection with the recommissioning of USS Olympia, and when she was put into commission, 15 May 1907, he joined her as Executive Officer. Detached in August 1907, he had a brief assignment at the Naval Academy, and in November of that year reported as Executive Officer and Navigator of USS Panther. Transferred in June 1908 to USS Ohio, he served as Ordnance Officer and later as Navigator until June 1909, after which he was attached to USS Wisconsin as Executive Officer.

Between May 1910 and June 1913 he headed the Department of Ordnance and Gunnery at the Naval Academy, and the following two months attended a course at the Naval War College, Newport, Rhode Island. In August he assumed command of USS Nashville, and from January 1914 to April 1915 commanded USS Montana. Under his command Montana operated with the Atlantic Fleet in Cuban waters, off Mexico and in the waters of Haiti. He was a member of the landing force ashore at Vera Cruz, Mexico in 1914, and at Haiti the same year.

He was Commandant of the Fourth Naval District, with additional duty as Commandant of the Navy Yard, Philadelphia, Pennsylvania, from September 1920 until June 1923, when he assumed command of Battleship Division THREE, Battle Fleet. After the completion of the long range battle practice, January 1925, he was detached from that command and during the period February of that year until June 1928 was Superintendent of the Naval Academy. He reported on 26 June 1928, in the rank of Vice Admiral, as Commander Battleship Divisions, Battle Fleet, and continued to serve as such until he was appointed Commander in Chief, Battle Fleet. He assumed that duty, in the rank of Admiral, on 21 May 1929.

Ordered to return to the United States, he reported on 16 June 1930, in his permanent rank of Rear Admiral, as Commandant of the First Naval District, with additional duty as Commandant of the Navy Yard, Boston, Massachusetts. He served in that capacity until relieved of active duty on 30 June 1933, pending his retirement on 1 September that year. Admiral Nulton died on 11 November 1954 in Maysville, Kentucky.

In addition to the Navy Cross, Admiral Nulton had the Spanish Campaign Medal (USS New Orleans); Philippine Campaign Medal (USS Concord and USS Bennington); Mexican Service Medal (USS Montana); the Navy Expeditionary Medal (USS Montana); and the world War I Victory Medal. He had also been awarded the Order of the Crown (Grand Commander) by the Government of Roumani, and the Order of the Crown (rank of Commendatore) by the Italian Government (awarded for the occasion of the Balbo Flight - 17 December 1930 to 15 January 1931).