Wisconsin I (Battleship No.9) 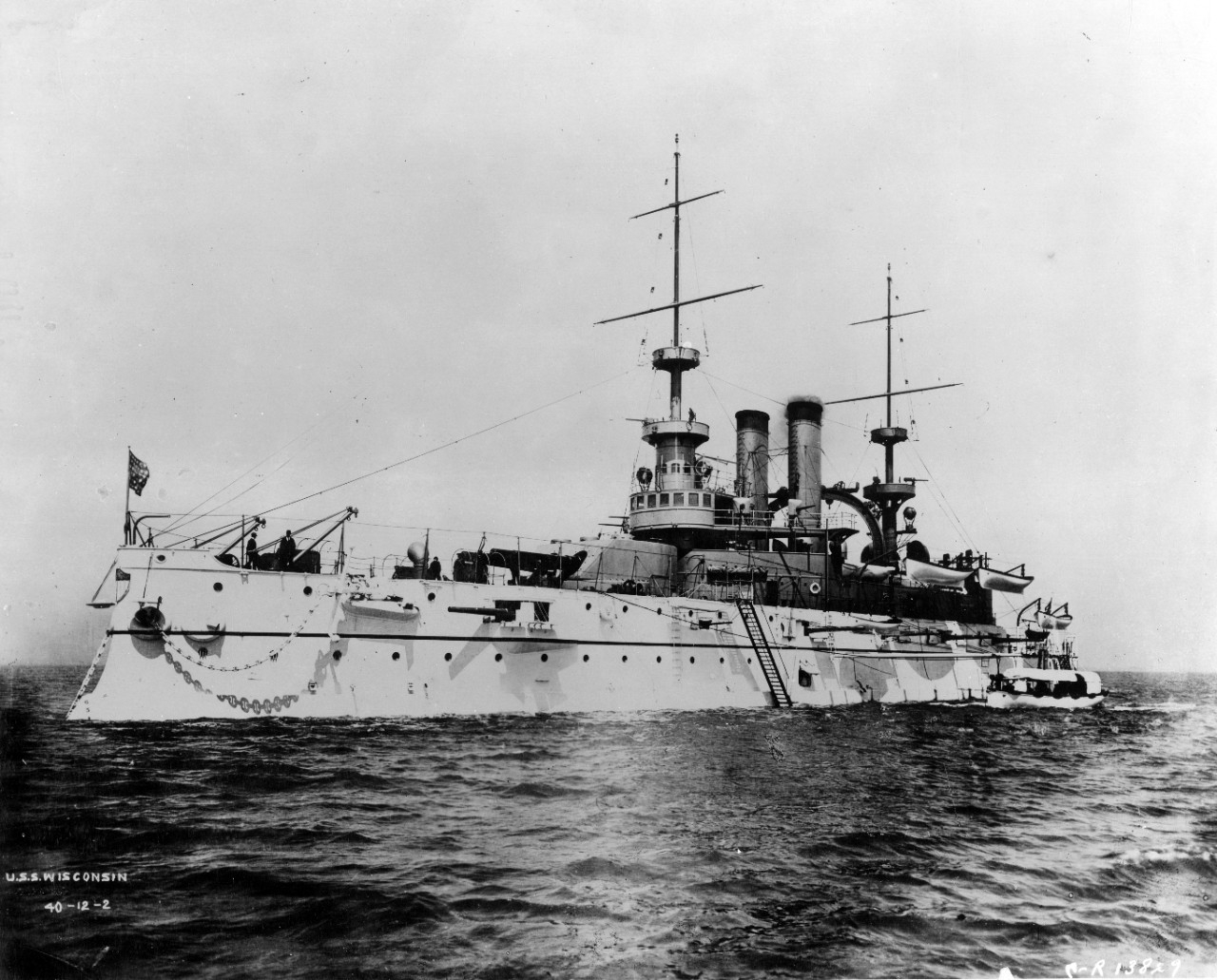 The first Wisconsin (Battleship No. 9) was laid down on 9 February 1897 at San Francisco, Calif., by the Union Iron Works; launched on 26 November 1898; sponsored by Miss Elizabeth Stephenson, the daughter of Senator Isaac Stephenson of Marinette, Wis., and commissioned on 4 February 1901, Capt. George C. Reiter in command.

She next made a voyage, in company with the battleships Oregon and Iowa, the cruiser Philadelphia, and the torpedo-boat destroyer Farragut, to the Pacific Northwest, reaching Port Angeles, Wash., on 29 June. She then shifted to Port Whatcom, Wash., on 2 July, and participated in the 4th of July observances there before she returned to Port Angeles the following day to resume her scheduled drills and exercises. Those evolutions kept the ship occupied through mid-July. 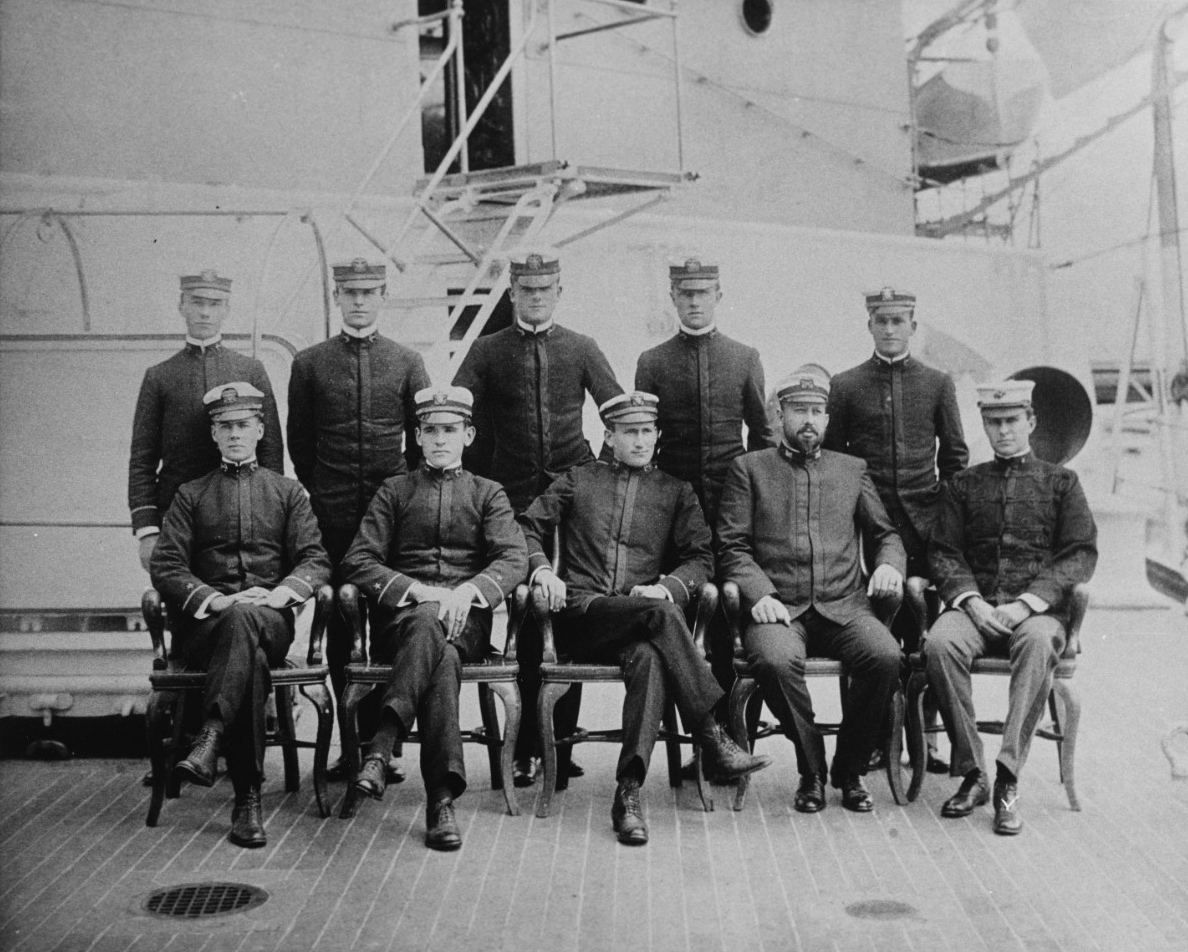 Following repairs and alterations at the Puget Sound Navy Yard, Bremerton, Wash., from 23 July to 14 October, Wisconsin sailed for the middle and southern reaches of the Pacific, reaching Honolulu, Hawaii, on 23 October. After coaling there, the battleship then got underway for Samoa on the 26th and exercised her main and secondary batteries en route to her destination.

Reaching the naval station at Tutuila on 5 November, Wisconsin remained in that vicinity, along with the collier Abarenda and the hospital ship Solace, for a little over two weeks. Shifting to Apia, the scene of the disastrous hurricane of 1888, Wisconsin hosted the Governor of German Samoa before the man-of-war departed that port on the 21st, bound, via Hawaii, for the coastal waters of Central and South America.

Wisconsin reached Acapulco on Christmas Day, 1901, and remained in port for three days. After coaling, the man-of-war twice visited Callao, Peru, and also called at Valparaiso, Chile, before she returned to Acapulco on 26 February 1902.

Wisconsin exercised in Mexican waters, at Pichilinque Bay and Magdalena Bay, from 5 to 22 March, carrying out an intensive and varied slate of exercises that included small-arms drills; day and night main battery target practices; and landing force maneuvers. She conducted further drills of various kinds as she proceeded up the west coast, touching at Coronado, San Francisco, and Port Angeles before she reached the Puget Sound Navy Yard on 4 June.

The battleship underwent repairs and alterations until 11 August. She then conducted gunnery exercises off Tacoma and Seattle, Wash., before she returned to the Puget Sound Navy Yard on 29 August for further work. She remained there until 12 September, when she sailed for San Francisco, en route to Panama.

Wisconsin, as flagship, Pacific Squadron, with Rear Admiral Silas Casey embarked, arrived at Panama, Colombia, on 30 September 1902, to protect American interests and to preserve the integrity of transit across the isthmus. Casey offered his services as a mediator in the crisis that had lasted for three years and invited leaders of both factions-conservatives and liberals,  to meet on board Wisconsin. Over succeeding weeks, through October and into November, prolonged negotiations ensued. Ultimately, however, the warring sides came to an agreement, and signed a treaty on 21 November 1902. The accord came to be honored, in Colombian circles, as "The Peace of Wisconsin." When Rear Admiral Henry Glass, Admiral Casey's successor as Commander in Chief, Pacific Squadron, wrote his report to the Secretary of the Navy for fiscal year 1903, he lauded his predecessor's diplomatic services during the Panama crisis. "The final settlement of the revolutionary disturbance," Glass wrote approvingly, "was largely due to his efforts."

Her task completed, the battleship departed Panama's waters on 22 November and arrived at San Francisco on 5 December to prepare for gunnery exercises. Four days later, Rear Admiral Casey shifted his flag to the armored cruiser New York, thus releasing Wisconsin from flagship duties for the Pacific Squadron. The battleship consequently carried out her firings until 17 December, when she sailed for Bremerton. Reaching the Puget Sound Navy Yard five days before Christmas of 1902, Wisconsin then underwent repairs and alterations until 13 May 1903, when she sailed for the Asiatic Station.

Wisconsin operated in the Far East, with the Asiatic Fleet, over the next three years before she returned to the United States in the autumn of 1906. She followed a normal routine of operations in the northern latitudes of the station, China and Japan, in the summer months, because of the oppressive heat of the Philippine Islands that time of year, but in the Philippine Archipelago in the winter. She touched at ports in Japan and China, including Kobe, Yokohama, Nagasaki, and Yokosuka; Amoy, Shanghai, Chefoo, Nanking, and Taku. In addition, she cruised the Yangtze River (as far as Nanking), the Inland Sea, and Nimrod Sound. The battleship conducted assigned fleet maneuvers and exercises off the Chinese and Philippine coasts, intervening those evolutions with regular periods of in-port upkeep and repairs. During that time, she served as Asiatic Fleet flagship, wearing the flag of Rear Admiral Cooper.

The battleship departed Yokohama on 20 September and, after calling at Honolulu en route between 3 and 8 October, arrived at San Francisco on the 18th. After seven days' stay at that port, she headed up the west coast and reached the Puget Sound Navy Yard on 28 October. She was decommissioned there on 15 November 1906.

Recommissioned on 1 April 1908, Capt. Henry Morrell in command, Wisconsin was fitted out at the Puget Sound Navy Yard until the end of April. After shifting to Port Angeles from 30 April to 2 May, the battleship proceeded down the western seaboard and reached San Francisco on 6 May to participate in a fleet review at that port. She subsequently returned to Puget Sound to complete the installation of her fire control equipment between 21 May and 22 June.

Soon thereafter, Wisconsin retraced her southward course, returning to San Francisco in early July. There, she joined the battleships of the Atlantic Fleet in setting out on the transpacific leg of the momentous circumnavigation of the globe. The cruise of the "Great White Fleet" served as a pointed reminder to Japan of the power of the United States, a dramatic gesture made by President Theodore Roosevelt as signal evidence of his "big stick" policy. Wisconsin, during the course of her part of the voyage, called at ports in New Zealand, Australia, the Philippines, Japan, China, Ceylon, and Egypt; transited the Suez Canal; visited Malta, Algiers, and Gibraltar before arriving in Hampton Roads on Washington's Birthday, 1909, and passing in review there before President Roosevelt. The epic voyage had confounded the doomsayers and critics, having been accomplished without any serious incidents or mishaps.

Wisconsin departed from the Tidewater area on 6 March and arrived at the Portsmouth (N.H.) Navy Yard three days later. The pre-dreadnought battleship there underwent repairs and alterations until 23 June, doffing her bright "white and spar color" and donning a more businesslike gray. The man-of-war joined the Atlantic Fleet in Hampton Roads at the end of June, but she remained in those waters only a short time, for she sailed north to Portland, Maine, arriving there on 2 July in time to take part in the 4th of July festivities in that port.

The battleship next headed down the eastern seaboard, cruising off Rockport and Provincetown, Mass., before she returned, with the fleet, to Hampton Roads on 6 August. Over the ensuing weeks, Wisconsin fired target practices in the southern drill grounds, off the Virginia capes, breaking those underway periods with upkeep in Hampton Roads.

Wisconsin steamed with the fleet to New York City- where she anchored in the North River to take part in the Hudson-Fulton celebrations between 22 September and 5 October, before she underwent repairs at the Portsmouth (N.H.) Navy Yard from 7 October to 28 November. She then dropped down to Newport, R.I., upon the conclusion of that yard period, picking up drafts of men for transportation to the Atlantic Fleet at Hampton Roads.

Wisconsin operated with the fleet off the Virginia capes through mid-December, before she headed for New York for the Christmas holidays in port. Subsequently cruising to Cuban waters in early January 1910, the battleship operated out of Guantanamo Bay for a little over two months, from 12 January to 19 March. 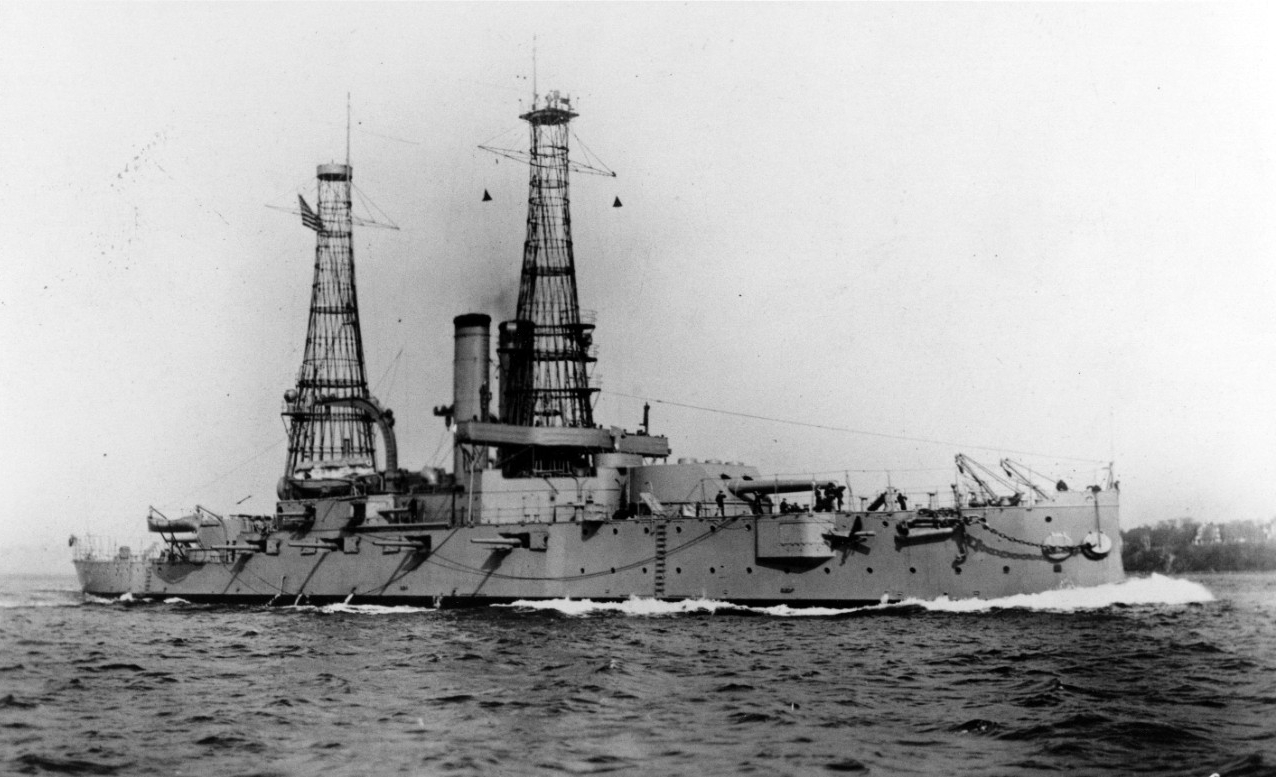 The pre-dreadnought battleship then visited Tompkinsville, N.Y., and New Orleans, La., before she discharged ammunition at New York City on 22 April. Later that spring, 1910, she moved to the Portsmouth (N.H.) Navy Yard, where she was placed in reserve. She was moved to Philadelphia in April 1912 and, that autumn, took part in a naval review off Yonkers, New York, before resuming her reserve status with the Atlantic Reserve Fleet. Placed "in ordinary" on 31 October 1913, Wisconsin remained in that status until she joined the Naval Academy Practice Squadron in the spring of 1915, assuming training duties along with the battleships Missouri and Ohio. With that group, she became the third battleship to transit the Panama Canal, making that trip in mid-July 1915 en route to the west coast of the United States with her embarked officers-to-be.

Wisconsin discharged her duties as a midshipman's training ship into 1917 and was moored at the Philadelphia Navy Yard on 6 April of that year, when she received word that the United States had declared war on Germany. Two days later, members of the Naval Militia began reporting on board the battleship for quarters and subsistence.

On 23 April, Wisconsin, Missouri, and Ohio were placed in full commission and assigned to the Coast Battleship Patrol Squadron. Within two weeks, on 2 May, Comdr. (later Admiral) David F. Sellers reported on board and took command. Four days later, the battleship got underway for the Virginia capes; and she arrived at Yorktown, Va., on the 7th.

From early May through early August, Wisconsin operated as an engineering school ship on training cruises in the Chesapeake Bay-York River area. She trained recruits as oilers, watertenders, and firemen; who, when qualified, were assigned to the formerly interned merchantmen of the enemy taken over by the United States upon the declaration of war, as well as to submarine chasers and the merchant vessels then building in American yards.

Wisconsin then maneuvered and exercised in company with the battleships Kearsarge, Alabama, Illinois,Kentucky, Ohio, Missouri, and Maine between 13 and 19 August, en route to Port Jefferson, L.I. Over the ensuing weeks, Wisconsin continued training and tactical maneuvers based on Port Jefferson, making various training cruises into Long Island Sound.

She subsequently returned to the York River region early in October and resumed her training activities in that locale, operating primarily in the Chesapeake Bay area. Wisconsin continued that duty into the spring of 1918, interrupting her training evolutions between 30 October and 18 December 1917 for repairs at the Philadelphia Navy Yard.

After another stint of repairs at Philadelphia from 13 May to 3 June 1918, Wisconsin got underway for a cruise to Annapolis but, after passing the Brandywine Shoal Light, received orders to stick close to shore. Those orders were later modified to send Wisconsin up the Delaware River as far as Bombay Hook, since an enemy submarine was active off Cape Henlopen. Postwar examination of German records would show that U-151, reportedly the first of six enemy submarines to come to the eastern seaboard in 1918, sank three schooners on 23 May and other ships over ensuing days.

Getting underway again on 6 June, Wisconsin arrived at Annapolis on the following day. On the next day, the battleship embarked 175 3d class midshipmen and got underway for the York River. The ship conducted training evolutions in the Chesapeake Bay region until 29 August, when she returned to Annapolis and disembarked midshipmen. Underway for Yorktown on the 30th, Wisconsin there embarked 217 men for training as firemen, water tenders, engineers, steersmen and signalmen, resumed her training duties, and continued the task through the signing of the armistice on 11 November.

She completed her training activities on 20 December, sailed north, and reached New York City three days before Christmas. Wisconsin was among the ships reviewed by Secretary of the Navy Josephus Daniels from the deck of the yacht Mayflower and by Assistant Secretary of the Navy Franklin D. Roosevelt from Aztec (SP-590) on the day after Christmas, 26 December.

Wisconsin cruised with the fleet in Cuban waters that winter and, in the summer of 1919, made a midshipman training cruise to the Caribbean.