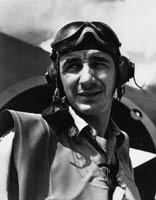 Henry Gabriel Sanchez was born on 29 December 1907 in New York, New York. Receiving his early education in his native city, he entered the US Naval Academy at Annapolis, Maryland, from New York, as a Midshipman on 26 June 1926. Graduated and commissioned Ensign on 5 June 1930, he chose a career in Naval Aviation, and subsequently received periodic promotions in grade, attaining the rank of Captain (temporary) on 1 April 1946. He reverted to his permanent rank of Commander on 1 December 1947, but was later selected for promotion to Captain, confirmed on 21 April 1949. [He later advanced to rear admiral on the retired list.]

After graduation from the Academy in 1930, he had sea duty aboard the USS Trenton until September 1931. He then returned to the United States for flight training at the Naval Air Station, Pensacola, Florida. Designated Naval Aviator on 31 September 1932, he remained at the Pensacola Air Station until October of that year, when he was ordered to report to Aircraft, Battle Force, USS Saratoga, flagship. Later he was assigned to Fighting Squadron Three-B, attached consecutively to the USS Langley and USS Ranger. He continued service with that Squadron until June 1935, and thereafter until April 1937 had duty at the Naval Air Station, Norfolk, Virginia.

In June 1937, he joined the USS Huron, tender for aircraft detachment Asiatic Fleet, based at Cavite, Philippine Islands. He was detached from the Huron, and from January 1940 to September 1941 served at the Naval Air Station, Pensacola, Florida. He was assigned to Fighting Squadron Seventy-Two, when war was declared on the Axis Powers on 8 December 1941, and in May 1942 he assumed command of that Squadron.

Fighting Squadron Seventy-Two was assigned early in the war to the USS Wasp, and later transferred to the USS Ranger on Atlantic patrol. The Squadron returned to the United States, and after picking up new planes, departed for Pearl Harbor, Territory of Hawaii, where they were assigned to the USS Saratoga. Back to Pearl Harbor, they left there to join the ill-fated Hornet. She was sunk on 26 October 1942 by enemy air attack in the Battle of Santa Cruz, Solomon Islands.

"...Flying in extremely adverse weather over an enemy protected harbor [he] coolly and methodically strafed Japanese patrol planes and destroyers lying at anchor in spite of vigorous anti-aircraft opposition ..." For this action he was awarded the Air Medal. He was also awarded a Gold Star in lieu of a Second Air Medal "for meritorious achievement...attached to the USS Hornet during the Battle of Santa Cruz...from October 15 to 26, 1942. Completing his fifth flight during this period, [he] contributed materially to the success of his squadron..."

"For meritorious achievement...on October 26, 1942..." he was awarded the Distinguished Flying Cross, and cited in part as follows:

"...Covering a striking group of our scout and torpedo bombers [he] led a division of fighters in a determined and daring attack on Japanese interceptor planes, thus enabling our planes to succeed in their attack mission against enemy heavy naval units including carriers and cruisers..."

After the Hornet was sunk in October 1942, Fighting Squadron Seventy-Two, under his command, was based on the USS Enterprise, and later on smaller carriers, until February 1943. He is also entitled to the Ribbon for, and a facsimile of the Presidential Unit Citation awarded the First Marine Division, Reinforced, and to the facsimile and citation awarded the USS Enterprise.

Upon his return to the United States he had duty from April 1943 to January 1944 as Training Officer of an advanced combat tactics training squadron at the Naval Auxiliary Air Station, Lee Field, Jacksonville, Florida. Following fitting out duty in the USS Rudyerd Bay at the Kaiser Shipbuilding Company, Vancouver, Washington, he joined her as Executive Officer upon her commissioning on 25 February 1944. Detached from that carrier escort in April 1944, he again had pre-commissioning duty at the Kaiser Shipbuilding Company, in connection with the USS Thetis Bay. She was commissioned on 21 April 1944, and he reported aboard as Executive Officer. In November 1945, he transferred to the USS Intrepid, assuming command of that carrier in April 1946, with additional duty as Executive Officer.

Captain Sanchez retired in November 1959 and made Rear Admiral on the retired list. He passed away in 1978.