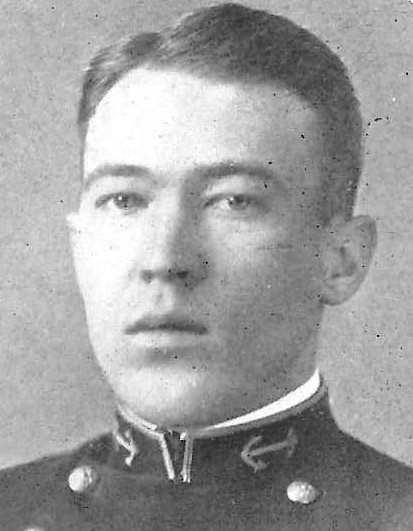 Captain Battle, born in Oglethorpe, Georgia, June 15, 1887, attended Alabama Polytechnic Institute at auburn, before his appointment to the US Naval Academy, Annapolis, Maryland from the Fourth District of Georgia in 1906.  Graduated in June 1910 he served the two years at sea then required by law before being commissioned Ensign in March 1912, and was subsequently promoted to Lieutenant (junior grade), March 7, 1915, and Lieutenant, March 7, 1918.  He received a temporary promotion to Lieutenant Commander during the World War and was commissioned in that rank on September 20, 1921, was promoted to Commander, June 4, 1931, Captain to date from June 23, 1938.  He served in the temporary rank of Commodore from April 13, 1944 to December 1, 1947.

After graduation in 1910, Captain Battle served consecutively in the USS North Carolina, the USS Montgomery, the USS North Dakota, and the USS Kansas until July 1915.  He then joined the Presidential yacht USS Mayflower, serving until August 1918, with additional duty as Naval Aide at the White House during 1915-16.  From September 1918 until February 1919 he was executive officer of the Naval Air Station, Fauillac, France.  He then had duty as executive officer of the USS Kaiserin Augusta Victoria and for his services in those assignments was awarded the Navy Cross with the following citation:

“For distinguished service in the line of his profession as Executive Officer of the US Naval Air Station at Pauillac, France, for the efficient organization and handling of the forces engaged in fighting a dangerous fire on the Portuguese Ship PANICHE, on November 11, 1918, and for his untiring and highly successful efforts in manning, organization and provisioning the USS Kaiserin Augusta Victoria.”

In April 1919, Captain Battle was assigned duty as executive officer of the USS Birmingham, and in December 1920 assumed command of the USS Claxton.  Detached from that duty in March 1921 he had charge of fitting out the USS Chase, assuming command of that ship on her commissioning, March 10, 1921.  In August of that year he rejoined the Claxton, serving until June 1921, when he was ordered to report to the Naval Academy, Annapolis, Maryland.  In October 1922 he reported for duty as executive officer of the Naval Training Station, Newport, Rhode Island, serving until July 1924.  He then joined the USS Florida with duty as gunnery officer of that battleship until September 1924.  He commanded the USS Selfridge from October of that year until February 1927.

Captain Battle served in the Executive Department, Naval Academy, Annapolis, Maryland, from March 1927 until June 1930 with duty as Aide on the Staff of the Commander, Midshipman’s Practice Squadron, USS Arkansas, during the summer of 1929, and during the summer of 1930 he had duty in connection with the Naval Reserve Cruises, Naval Training Station, Great Lakes, Illinois.  From October 1930 until June 1932 he was aide and flag lieutenant on the Staff of Rear Admiral (now Admiral, Retired) William H. Standley, USN, Commander, Destroyer Squadrons, Battle Fleet in the flagships Omaha and Detroit (title changed on April 1, 1931, to Destroyers, Battle Force, US Fleet).  He continued in that duty when Rear Admiral (now Admiral, Retired) Edward C. Kalbfus, USN, relieved Rear Admiral Standley of that command.

After completing the senior course at the Naval War College, Newport, Rhode Island, in May 1933, Captain Battle remained for duty on the Staff of that college until October 1935.  The following month he reported for duty in connection with fitting out the USS Quincy, assuming duty as executive officer of that cruiser on her commissioning, June 9, 1936 and serving until June 1938.  While serving in that assignment the Quincy evacuated Americans from Spain at the beginning of the Spanish Civil War.  Returning to the Naval War College, Newport, Rhode Island, he completed the advanced course in June 1939, and on June 27 reported to the University of California at Los Angeles, for duty as Professor of Naval Science and Tactics, in connection with the Naval Reserve Officers’ Training Corps Unit, serving in that assignment until June 1941.

On June 28, 1941, Captain Battle assumed command of the USS Quincy which was assigned to the Defense Forces of Iceland during the early part of World War II.  After being detached from the Quincy in May 1942 he reported for duty as Chief of Staff and Aide to the Commander, Service Force, Atlantic Fleet, and for his services in the latter assignment which extended to December 1945, he was awarded the Legion of Merit and the Gold Star in lieu of a second Legion of Merit and cited as follows:

“For exceptionally meritorious conduct in the performance of outstanding services to the Government of the United States as Chief of Staff, Commander Service force, United States Atlantic Fleet during operations against the enemy in the Atlantic and Mediterranean Areas, from May 1942 to October 1944.  Faced with the problem of supporting and supplying the extensive operations of United States Naval and Military Forces in this area, Commodore Battle rendered invaluable assistance in the formulation and execution of plans necessary to maintain adequate logistic support.  Frequently confronted with the difficulties of limited equipment, facilities and ships he aided materially in affecting the successful culmination of numerous operations in the Battle of the Atlantic and the liberation of Europe.  His foresight, leadership and devotion to the fulfillment of a vital assignment contributed to the effective prosecution of the war and upheld the highest traditions of the United States Naval Service.”

GOLD STAR in lieu of a second LEGION OF MERIT:

“For exceptionally meritorious conduct in the performance of outstanding service as Chief of Staff to Commander Service Force, Atlantic Fleet, from October 1944 until December 1945.  By his exceptional administrative ability, his sound judgment and his inspiring leadership, Commodore Battle carried out the duties of his responsible position in such a manner that the needs of the Fleet were met and our forces maintained ready for action.  Three times during his tenure of office as Chief of Staff, transfers of command made it necessary for him to assume command of the Service Force, Atlantic Fleet.  Due to his thorough knowledge of the multitudinous problems involved these transfers were effected without interruption of the high quality of vital work performed by Service Force.  The untiring effort, professional skill and complete devotion to duty displayed by him during this entire period were invaluable to the Atlantic Fleet and its outlying bases.  Commodore Battle’s unusual efficiency, superior initiative and outstanding performance of duty reflect great credit upon himself and the United States Naval Service.”

Captain Battle reported for duty as Commander, Naval Operating Base,               Guantanamo Bay, Cuba, on January 1, 1946, and on April 15, 1948 was ordered detached from that assignment and to duty in the Third Naval District, New York, New York.

In addition to the Navy Cross and the Legion of Merit with Gold Star, Captain Battle has the Mexican Service Medal; the Victory Medal Overseas Clasp and is entitled to the American Defense Service Medal with Bronze “A” (for service in the USS Quincy operating in actual or potential belligerent contact with the Axis Forces in the Atlantic prior to December 7, 1941); the European-African-Middle Eastern Area Campaign Medal and the World War II Victory Medal.