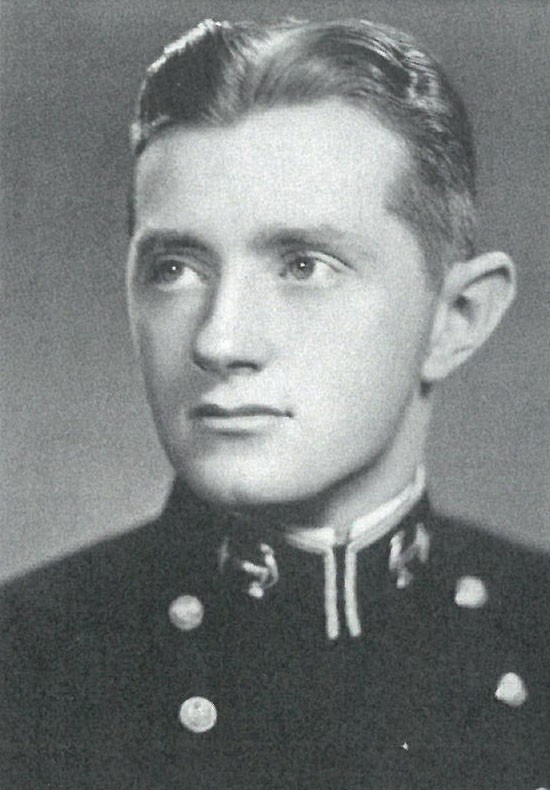 George Cornelius Ball, Jr. was born in Memphis, Tennessee, on May 20, 1919 son of George G. and Lois Davis Ball, both now deceased. He attended Batesville (Arkansas) High School, and Randle’s Preparatory School in Washington, DC, and entered the US Naval Academy, Annapolis, Maryland, on July 12, 1937. Graduated with the Class of 1941 on February 7, that year, and commissioned Ensign in the US Navy from that date, he subsequently advanced to the rank of Captain, to date from July 1, 1959.

After graduation from the Naval Academy he served on board the new battleship North Carolina from her commissioning in April 1941 until February 1942, after the United States entered World War II. He then had submarine instruction on board USS Growler in March and April 1942 and at the Submarine School, New London, Connecticut, until June of that year. In July the USS S-14, in which he served as Engineering Officer, Navigator and Executive Officer until January 1944. For a year thereafter he commanded USS O-6, in Atlantic waters, and after two months’ instruction at the Prospective Commanding Officers School, New London, served during the latter period of the war as Executive Officer and Navigator of USS Sand Lance, participating in two war patrols in the Pacific.

Detached from the San Lance in December 1945, he served four months as Executive Officer of USS Guavina, and from June 1946 until April 1947 as Executive Officer and Navigator of  USS Conger. He then returned to the Submarine Base, New London, to serve until January 1948 as Legal Officer. The same months he became Naval Aide to the Commander in Chief, Caribbean Command (Gen. Matthew B. Ridgeway, USA), and served in that capacity until June 1949. From August until November of that year he served as Executive Officer and Navigator of USS Raton, and for ten months thereafter had duty in connection with Naval Reserve on the Staff of the Commander Submarine Force, Atlantic Fleet.

In October 1950 he assumed command of USS Entemedor (SS-340) and, detached in December 1951, served throughout the year 1952 as Commanding Officer of USS Tench (SS 417), which was assigned to occupation duty in the European Area early that year. In February 1953 he reported to the Navy Department, Washington, DC, for duty in the Office of the Chief of Naval Operations, assigned to Fleet Planning (Submarine and Amphibious Desk). Detached in June 1955, he served for a year as Executive Officer of the USS Gilmore (submarine tender), then had a year in command of Submarine Division FORTY TWO

He was a student at the Naval War College, Newport, Rhode Island, from August 1957 until June 1958, after which he returned to the Office of the Chief of Naval Operations, where he was assigned to Joint Chief of Staff Indoctrination and Special Projects. In February 1959 he was transferred to the Office of the Joint Chiefs of Staff (Manpower and Personnel), where he remained until June 1961. The next month he became Commanding Officer of the US Naval Station, Guantanamo Bay, Cuba and in August 1963 assumed command of USS Monrovia (APA-31). From November 1964 to November 1966 he was an Instructor of Naval Science at the Naval War College, Newport, after which he was in command of Submarine Squadron TWELVE. In May 1968 he was ordered detached for duty on the Joint Staff of the Commander in Chief, US Southern Command.

He is a member of the Sons of the American Revolution.