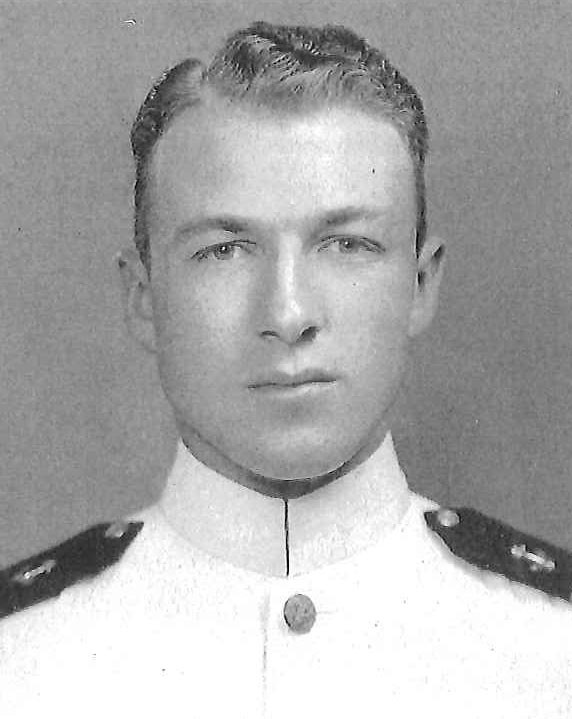 Charles Moore Cassel, Jr., was born in Harrisburg, Pennsylvania, on December 24, 1916, son of Charles M. and Ruth Hoffman (Brown) Cassel. He attended Hagerstown (Maryland) High School and graduated Valedictorian of his Class in 1934. He entered the US Naval Academy, Annapolis, Maryland, on appointment from the State of Maryland in 1935 and was graduated and commissioned Ensign on June 1, 1939. Advancing progressively in rank, he subsequently attained that of Captain, to date from December 1, 1957.

Following graduation from the Naval Academy in 1939, he joined tUSS Pensacola (CA-24), and in September of that year was detached for duty as Gunnery Officer of USS Hale (DD-133), which had been recommissioned at San Diego, California. That vessel was on of fifty destroyers turned over to Great Britain under Lend-Lease agreement in 1940. In October of that year he was assigned fitting out duty in USS Eberle (DD-430) at the Bath (Maine) Iron Works. He served in that destroyer as Assistant Engineering and Gunnery Officer from her commissioning December 4, 1940 until November 1941. He received a commendatory letter for his services in connection with the rescue by the Eberle of the entire complement of the British freighter Nigaristan in the North Atlantic. He next reported as Navigator on board USS Anderson (DD-411), which was operating on North Atlantic convoy when the United States entered World War II, December 8, 1941.

In May 1943 he reported for fitting out duty in USS Satterlee (DD-626) at the Seattle-Tacoma Shipbuilding Corporation, Seattle, Washington, and joined that destroyer as Executive Officer when she was put into commission, July 1, 1943. “For meritorious service… during operations against enemy coastal defense in the Bay of Seine, June 6, 1944…” he was awarded the Bronze Star Medal with Combat “V”. The citation further states in part:  “Although under heavy fire by enemy coastal defense and machine gun fire of enemy troops, Lieutenant Commander Cassel directed gunfire support operations in the combat information center and cooperated with the shore fire control party of the Ranger who were assaulting enemy fortifications at Point du Hoe. When communications were established, he directed close support fire of USS Texas and USS Satterlee as called for by the Rangers, thereby enabling them to establish a beachhead during the first day of Point du Hoe…”

Detached from the Satterlee in November 1944, he then assumed command of USS Mc Cook (DD-496). He received a Letter of Commendation, with authorization to wear the Commendation Ribbon, from Commander in Chief, US Pacific Fleet. The citation follows: “For meritorious conduct... while engaged in minesweeping operations in Japanese waters from October to December 1945. Demonstrating outstanding ability and initiative, he directed his vessel skillfully and efficiently in the clearing of enemy minefields, thereby contributing materially to the successful completion of minesweeping operations…”

Assigned in February 1947 to the Officer Distribution Division Bureau of Naval Personnel, Navy Department, Washington, DC, he remained there until July 1949, after which he attended the course in strategy and tactics (junior course) at the Naval War College, Newport, Rhode Island. Completing his instruction in June 1950, he next had service as Operations Officer on board USS Missouri (BB-63). “For meritorious service (in that capacity)… during operations against the enemy in the Korean Theater from September 16, 1950 to March 28, 1951…” he was awarded a Gold Star in lieu of a Second Bronze Star Medal with Combat “V,” The citation continues in part:

“Through his professional competence and thorough understanding of operations, he we welded his department into a closely knit unit, maintaining excellent communications and an efficient Combat Information Center, which continually supplied the ship and embarked flag with vital tactical information. He applied himself diligently to the tasks before him. His guidance and personal performance of duty were vital in the successful accomplishment of the bombardment of the enemy at Samchok, Pohangdong, Chongjim, Tachon, Hungan, Kangnumg, Inchon and other enemy occupied areas on the Korean coast where heavy damage was inflicted on enemy military and transportation targets….”

Returning to the Bureau of Naval Personnel in March, 1952, he was Head of the Enlisted Training Section until August 1955, when he assumed command of USS Fletcher (DDE-445). Detached from that vessel in November 1957, he became Commander Destroyer Division Seventy-Two (Western Pacific deployments) in January 1958 and in January of the next year reported as Chief of Staff and Aide to Commander Destroyer Flotilla Three. He attended the Senior Seminar in Foreign Policy at the State Department’s Foreign Policy Institute, Washington, DC, from September 1960 to June 1961 and next headed the Pacific-Far East Branch, Politico-Military Policy Division, Office of the Chief of Naval Operations, Navy Department. In June 1963 he assumed command of Destroyer Squadron Eighteen, and in October 1964 became Commander Military Sea Transportation Service, Mediterranean Sub-Area, with headquarters at Leghorn, Italy. In May 1965 he was transferred to command of the Military Sea Transportation Service, Eastern Atlantic and Mediterranean Area with headquarters at London, England (the following month headquarters moved from London to Bremerhaven, Germany).

He was assigned to the First Naval District Headquarters, Boston, Massachusetts in December 1966.